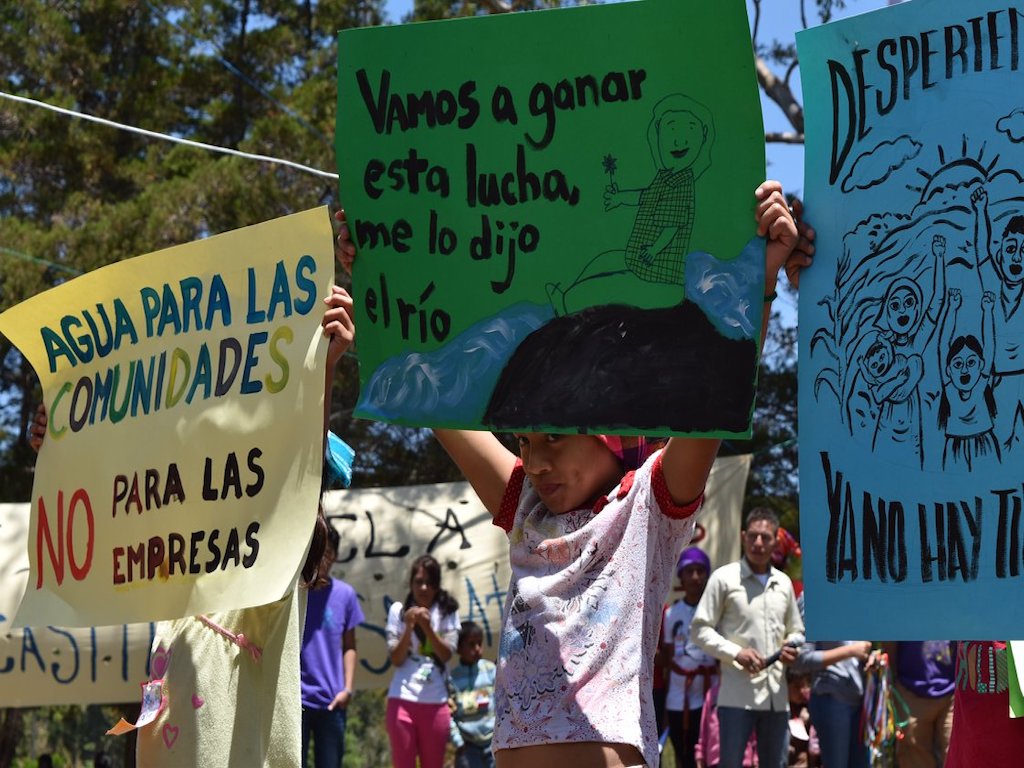 25 years of organizing are not easy to write nor to live. COPINH’s history is the history of 25 years of overcoming enormous obstacles and yet obtaining tremendous victories. COPINH’s existence itself is an affront to the system, to capital, to the narrow interests of the elite and that is why 25 years of life in resistance are themselves a fundamental victory.

25 years ago the world was witnessing how changing times meant the radicalization of plunder, the institutionalization of abuse and a choice by the same old powerful elite to scornfully and barbarically abandon the people. People were living through a time whose banner was hopelessness amidst the apparent triumph of the oligarchy and its exclusive hegemony. They announced the demise of any alternative and the sole victory of the worldview of the U.S., government’s rulers and of imperialism.

In this context, COPINH was born to give voice to the voiceless and fight for the resurgence of the Lenca people after centuries of erasure and invisibility, to demonstrate that in the midst of the most complicated of situations the way forward is and always will be struggle, resurgence, and the unyielding search for revolution. This organization was born with the objective of linking together and working with the communities most abandoned by the long history of plunder and colonization in Honduras, in order to, from there, from the roots of our societies, find, build and re-build alternative lives, to move beyond a long history of stagnation.

To celebrate these historic 25 years, hundreds of people gathered in the “Centro de Encuentros y Amistad ‘Utopía’” (Utopia Center for Gathering and Friendship). We brought together the various communities in struggle with our sister organizations and allies in order to remember the ways they have achieved victories and overcome challenges and adversities.

Above all, we gathered to pay homage to the struggle of an organization that would not be what it is were it not for the legacy of our sister Berta Cáceres. We remembered her strength, as well as the perverse forces that wanted to destroy her and thereby do away with COPINH, celebrating that two years after her death COPINH is still alive and continues to lift up the struggles that she taught us to wage. We have joyfully felt Berta in the air surrounding all of our actions, accompanying us in every moment, in each decision.

COPINH, after 25 years of existence, reaffirms the fundamental commitment to defend our territories, to defend life itself, to struggle daily to build a world of harmony and dignity in which we as indigenous peoples exercise our power as original peoples.

Therefor, consistent with the liberatory and insurrectionist spirit and foundational ideas that gave birth to our organization a quarter century ago, in recognition of our history and principal legacies, of solidarity between peoples as the main weapon of resistance and construction, of the Lenca worldview, identity and spirituality as a fundamental protective force, and of our identity as an indigenous, anti-patriarchal, anti-capitalist, diverse people’s organization in resistance, COPINH declares:

We will lift up the action and thought of sister Berta Cáceres as the fundamental guide for organized and emancipatory action by COPINH.

Based in our vision and worldview as indigenous and Lenca communities, we will wholeheartedly confront the dictatorial project being imposed on Honduras until it is defeated.

We will directly confront, from our territories, the model of extraction and plunder of our communities’ communal goods.

We will struggle tirelessly for justice in the case of sister Berta Cáceres, exposing the structures that are behind her assassination.

We will work to build an ever-more solid and committed community base that is conscious, combative and resilient.

From within our community, organizational and alliance spaces we will build alternative relationships rooted in life, resistance and struggle against the imposition of the system of structural domination.

We will reclaim and strengthen our practices of grassroots struggle and communication, permanent mobilization and direct action to exercise territorial control.

We embrace the call for unity among grassroots organizations and the effective alliance of the Honduran grassroots social movement.

We re-affirm our struggle to be grassroots, indigenous, community-based, anti-imperialist and rooted in solidarity.

We will radicalize our forms of resistance in accordance with the current circumstances of our context.

After 25 years of existence, we especially wish to salute all of the militant solidarity from organizations and solidarity movements around the world who have been by our side and continue to accompany us in pursuit of the common dream of change and liberation. To our sister peoples of the Latin American continent, to the people and organizations in the belly of the beast, to the peoples in resistance of the East, to the black and Afro-descendant peoples of the world, to the youth fighters and organized sisters, we send you a warm embrace from La Esperanza.

With the ancestral strength of Berta, Iselaca, Etempica and Mota we raise our voices full of Life, Justice, Freedom, Dignity and Peace!