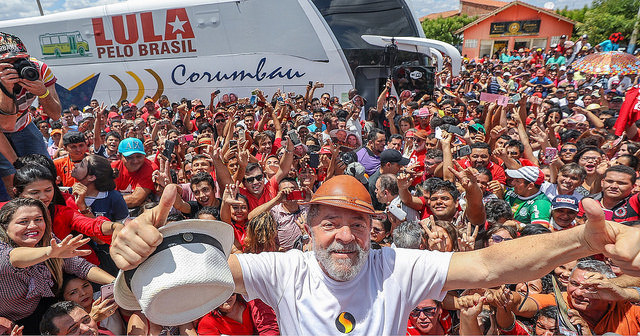 Brazil’s ex-president Luiz Inácio Lula da Silva received a visit last Thursday from two old friends, celebrated artists Chico Buarque and Martinho da Vila. On the same day, the Semiarid Against Hunger Caravan tour arrived in Curitiba, where the former president and Workers’ Party leader has been held as a political prisoner since April 7th. Activists who are taking part in the caravan argue that he was convicted with no evidence in order to stop him from running for president.

Chico Buarque and Martinho da Vila are Lula’s friends and political supporters and have been outspoken against the coup that removed president Dilma Rousseff from office in 2016. Buarque was one of the many artists who performed last Saturday at the Free Lula Festival in Rio de Janeiro, which gathered tens of thousands of people.

Regina Cruz, chair of the Unified Workers Central (CUT) in Paraná state and a member of the Free Lula Vigil coordination, said that the visit from the two artists is an important thing to happen on the same day the Semiarid Against Hunger Caravan arrived in Curitiba. “We spoke with both [Buarque and Vila] and explained what the caravan means,” she said.

Hoffmann read a letter by the former president to members of the Semiarid Against Hunger Caravan, in which the Workers’ Party leader points out: “They pretend poverty is not coming back. The struggle for a Brazil without hunger is Lula’s and ours, of all of us.”

The former president wrote about his hope: “I wish this caravan were not necessary and I believe our next caravan will be a caravan of hope.”

My fellow comrades in struggle,

Nothing is as important as this caravan tour you are doing right now, driving across this country, denouncing that hunger is growing once again and Brazil is returning to the Hunger Map.

But those who don’t know what it is to starve, who don’t care about this suffering, those who feed on the misery of the Brazilian people, pretend poverty is not returning to this Brazil that is being destroyed, and this is why they try to ignore your voice, your movement.

They also try to shut my voice down, because they think that, without my physical presence or my speech, it would be easier to continue to destroy, with impunity, everything we have built. But the struggle for a Brazil without hunger is Lula’s struggle. It’s our struggle, of all of us, voice, arms, and legs, talking, building, and walking, to build a more just country, with more solidarity.

This is why I can only thank you for your solidarity coming to Curitiba, all the way from Caetés, where I was born, and driving to Brasília, where our fate is decided upon.

Actually, my fellow comrades, what I really wished was that this caravan tour were not necessary. I wished that, at this point in the 21st century, we were not figuring out how many children will starve to death, or how many families in the semiarid region will struggle with drought.

What I really wished was that, instead of recording deaths, we were now thinking about how many young people will be able to graduate from college; how many tons of quality food family farmers will be able to put on Brazilians’ table; how many formal jobs we will generate in 2019; how many billions from pre-salt oil production Brazil will invest in education and health, in science and technology.

Right now, we should be doing a caravan tour toward the future. But the coup staged by [Michel] Temer and his allies from the Brazilian Social Democracy Party, endorsed by the mainstream media and part of the Public Prosecutor’s Office and the Judicial Branch, has locked Brazil in a time machine and made us go backwards two decades in only two years. They brought unemployment, hunger, and infant mortality back. They are selling our companies and handing our wealth over at a bargain.

And our mission is to hit the brake, turn this time machine around, and take Brazil back to the future. Have a safe journey, fellow comrades. And may our next caravan tour be for the victory of the Brazilian people against hunger and all forms of oppression.