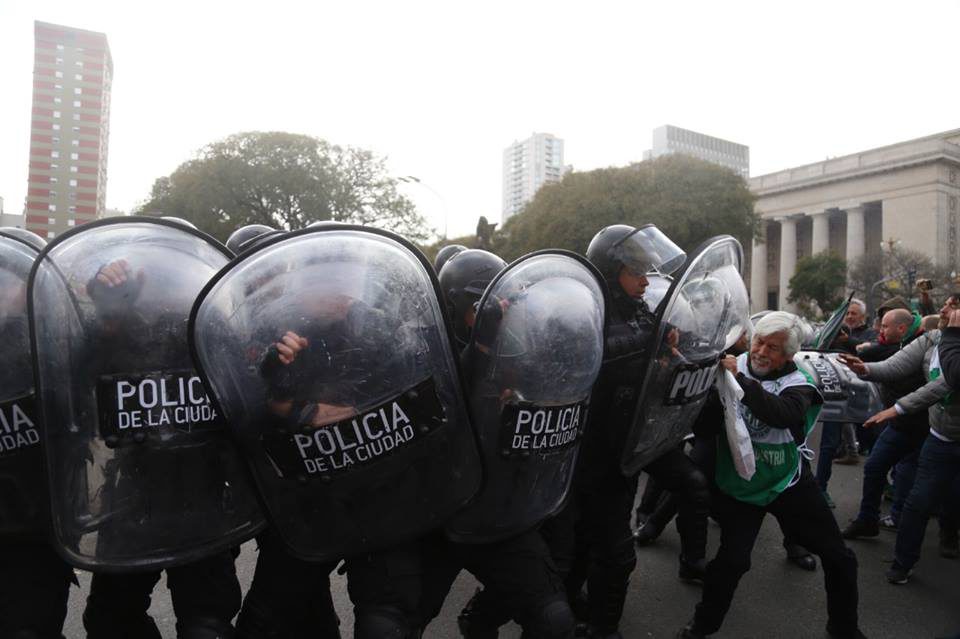 Despite heavy rain and almost freezing temperatures, thousands took to the streets on Thursday afternoon in Buenos Aires to march in defense of free and public education. Meanwhile, hundreds of workers from the ministry of agribusiness held a permanent vigil outside the ministry to protest the recent layoffs and the alleged threat of layoffs for another 500 more people. At the same time, the Argentine peso, which in May began to rapidly devalue against the dollar, sank further –  from 30 pesos a dollar to 40. The currency’s value has fallen more than 50% in just this year. All signs indicate a tipping point in the growing social, economic and political crisis, and mass discontent with the Cambiemos (conservative political party coalition of current president Mauricio Macri) government.

In May, the government began talks with the International Monetary Fund (IMF) and by June, an agreement had been reached for a US $50 billion loan. Speaking to Peoples Dispatch in July,  Gonzalo Armúa of Movimiento Popular Patria Grande (People’s Movement Great Homeland) and the Operative Secretary of Social Movements of ALBA, pointed out why the IMF loan would not only not solve the current economic crisis, but also have a dire impact on the working-class of Argentina. “The IMF is demanding higher levels of deregulation of the economy. The State is making budget cuts that will affect health, education and social welfare. Obviously, these cuts are in those areas that affect the people because the government does not want to increase taxes on the wealthier sectors. Instead, it raises taxes on electricity, water, gas, and other services. Meanwhile, the fuel prices have been raised again due to the deregularization of the sector, and this increase is transferred to all the expenses, including that of food.”

These public sector budget cuts and mass layoffs are precisely what the protests – which have been taking place almost daily across the country – have been about. Thursday’s National March for the Defense of Public Education was in response to the budget cuts to public universities and the demand by educators for just wages. The national march took place in the context of four weeks of striking by professors and teachers from 57 national universities. Those on strike are demanding that their salary increase reflect the drastic inflation and condemned the budget cuts in the universities.

These budget cuts reflect a general trend across the continent to de-fund and worsen conditions in the public universities, and the favoring of a model of privatized and inaccessible education. Currently though, Argentina has one of the most accessible models of higher education on the continent. University education is free and in order to enter, students must complete a year of “basic common cycle” courses in order to enter the programs of their choice, rather than a restrictive entrance exam. It is because of this accessibility that thousands of students from across the continent come to Argentina to pursue their studies.

The period has also seen workers continuing to mobilize against the mass layoffs that have been taking place across different sectors. In the ministry of agribusiness, it was announced that at least 500 staff members would no longer continue working at the entity. This was reportedly to have “greater efficiency of state resources”. The vigil of the workers of the ministry and other members of the Association of State Workers (ATE) on August 30 was met with harsh police repression. When the protesters blocked the major intersection in front of the ministry, the police launched pepper spray and charged towards the workers.

Similarly, in late June, layoffs were announced for around 350 workers from the Argentine national news agency Telam. The layoffs resulted in days of strikes and mobilizations until the Labor Appeals Court intervened and demanded that the workers be reinstated.

The budget cuts are unlikely to cease as Macri insists that the measures and his deal with the IMF are meant to protect the country from further harm. With the G20 Ministers Summit coming up in late November in the country even as residents are suffering from the growing crisis, it is clear that this summer will be full of mobilization and resistance.