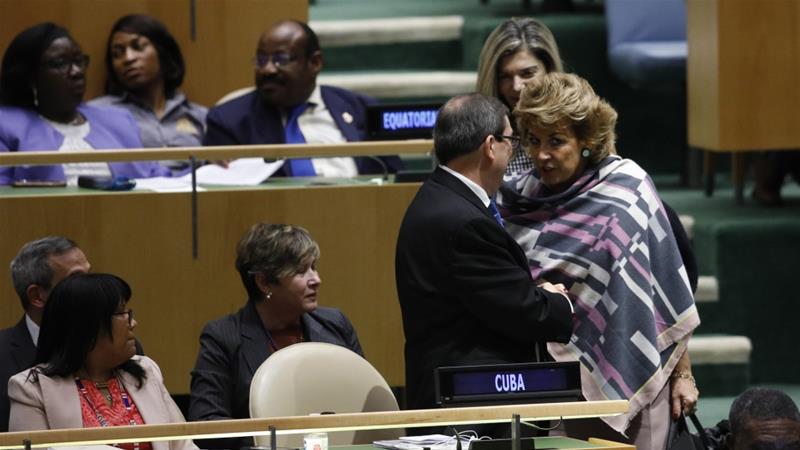 A day before the voting, on October 31, a representatives of 31 countries met at the UN “to express their rejection of the siege and to call for an end to a policy that violates the human rights of an entire nation”

On November 1, in New York, the United Nations General Assembly voted on a resolution submitted by Cuba that sought the ending of the economic, commercial and financial embargo imposed on them by the United States. The House saw a division with 189 votes in favor of the resolution, and only two countries – the US & Israel – voting against it. Thus, the international community overwhelmingly supported Cuba and condemned the prolonged unprincipled sanctions against Cuba.

Cuban President Miguel Díaz-Canel congratulated the Cuban people after the voting. “Congratulations Cuba. We have defeated once again the political criminal who seeks to suffocate us. 189 vs 2. The world is with us. We are Cuba, more dignified while more rebellious and sovereign. No more blockades”, he tweeted. Also, celebrating the victory of Cuban resolution against the blockade, he wrote: “Victory of our Cuba. The U.S. suffers 10 defeats in one. The people of the world voted for Cuba because they know that our cause is truly just. Cuba is respected. For Fidel and Raúl by the Revolution and the Cuban people, no more blockades.”

A day before the voting, on October 31, a representatives of 31 countries met at the UN “to express their rejection of the siege and to call for an end to a policy that violates the human rights of an entire nation”, said Bruno Rodríguez Parrilla, minister of foreign affairs of Cuba. During the meeting, representatives of different organizations and countries of the world condemned the obstacles imposed by the blockade and opposed the amendments proposed by the United States government. Rodríguez said that he was convinced after the meeting of October 31 that the voting would overwhelmingly support the resolution submitted by Cuba.

The unprincipled blockade was imposed by the U.S. government against Cuba in 1960 following the revolution led by Fidel Castro and the nationalization of Cuban property. For past 26 years, the democratic governments of the world have been demanding an end to it. This relentless and oppressive unilateral sanctions system has inflicted serious loss and has severely affected the economic development of the Latin American nation and its people.

(With inputs from Resumen Latinoamericano)