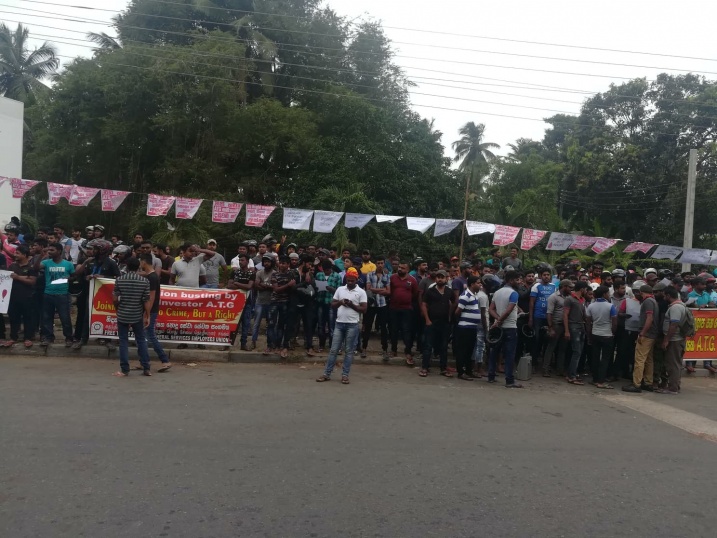 The strike began on January 11 at the Katunayaje Export Processing Zone.

Hundreds of workers in Sri Lanka’s rubber industry are seeking the reinstatement of five union leaders who were dismissed on charges of involvement in organizing a blood donation camp without prior permission from the company, ahead of the union’s second anniversary.

“The termination was announced despite the union leaders’ involvement in an arbitration process,” the protesters said.

The friction between the company and the workers grew after the union leaders organized a blood donation camp in September 2015, which the health minister attended. This event infuriated the company so much that they issued a chargesheet against 30 employees. Seven union leaders were placed under disciplinary proceedings while the remaining others were issued warning letters, strictly prohibiting them from attending such engagements in future.

“The ATG management acted unfairly without respecting the ongoing arbitration process and in violation of the Industrial Dispute Act. All benefits due to workers, irrespective of their involvement in union activities, should be provided to them. We demand that the terminated workers be reinstated immediately. We call upon the ATG management to constructively engage with the union towards resolving the dispute as soon as possible,” director of Free Trade Zone and General Service Employees Union, Anton Marcus, said.

ATC Ceylon has been accused of discriminating against the workers. In 2017, the company reportedly forced the union to carry out new elections, despite the union already having the mandate of the workers. The union nonetheless gained the majority in the elections, with a participation rate of over 90%. However, the discrimination against workers persisted.

The company tried to demoralize the workers by refusing to give gold medals to union members who had worked longer than five years. But when one of the workers resigned from the union, he duly received his medal.