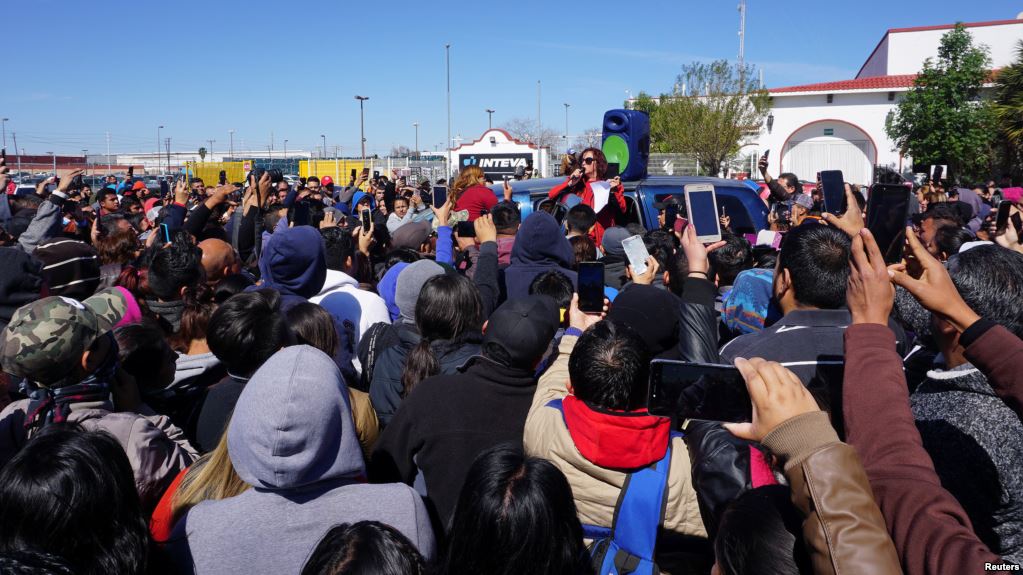 Hundreds of workers at Autoliv Mexico and Arca Continental are on strike. (Photo: Reuters)

Workers’ strike in Matamoros city, in the Tamaulipas state of Mexico, continues as hundreds of workers from different sectors walked off their jobs to demand a 20% pay increase and an annual bonus of 32,000 pesos, colloquially known as the “20/32”, after the same was won by workers of 48 unionized factories.

On February 15, 500 workers at the Mexican beverage company, Arca Continental, world’s second-largest Coca-Cola bottler, went on strike, demanding the same pay increase and bonus, among other compensations. The authorities adopted repressive measures against them, and on February 16, around 100 workers were held inside the company premises against their will.

“We are not fighting for ourselves, but for a better quality of life for our kids and their children. They won’t be screwed over or trampled upon by these kinds of people anymore,” a protesting plant mechanic told The Guardian.

Some workers also called these strikes anti-union. They said that the Union of Laborers, Industrial and Factory Workers (SJOIIM) had done little to protect their rights or bargain on their behalf. The SJOIIM leaders allegedly took bribes from companies in exchange for pacifying workers and not bringing their demands to the table for negotiation.

“In the past week, as many as 2,000 strike leaders have been fired and blacklisted, despite legal prohibitions and non-reprisal agreements signed by the employers,” said a United States union delegation, comprising of the AFL-CIO (The American Federation of Labor and Congress of Industrial Organizations), United Auto Workers and United Steelworkers.

Over 70,000 maquiladoras or large-scale factory workers in Matamoros were on strike since January 21, demanding a 20% increase in salary, an annual bonus of 32,000 pesos, reduction in union fees from 4% to 1%, shorter work week of 40 hours and better working conditions. After a month of strike, and several demonstrations, on February 9, over 25,000 workers from 48 factories called off the strike when the companies agreed to pay the “20/32” to unionized workers. Several thousand other non-unionized workers are still struggling to achieve these rights. They have been joined by supermarket, bottler as well as milk company workers.

With many companies agreeing to the demands, it is being feared that the strikes could spread to other parts of the country. Government officials warned that the strikes would have severe impact on employment. Francisco Cervantes, president of the Confederation of Industrial Chambers (Concamin), said that if strike action persists and spreads, “the companies could head to other states or leave Mexico altogether” because some companies don’t like conflict, “they prefer to migrate elsewhere”.

The US and Canadian workers expressed their solidarity with the workers of Matamoros and motivated them to continue fighting for dignified labor rights.