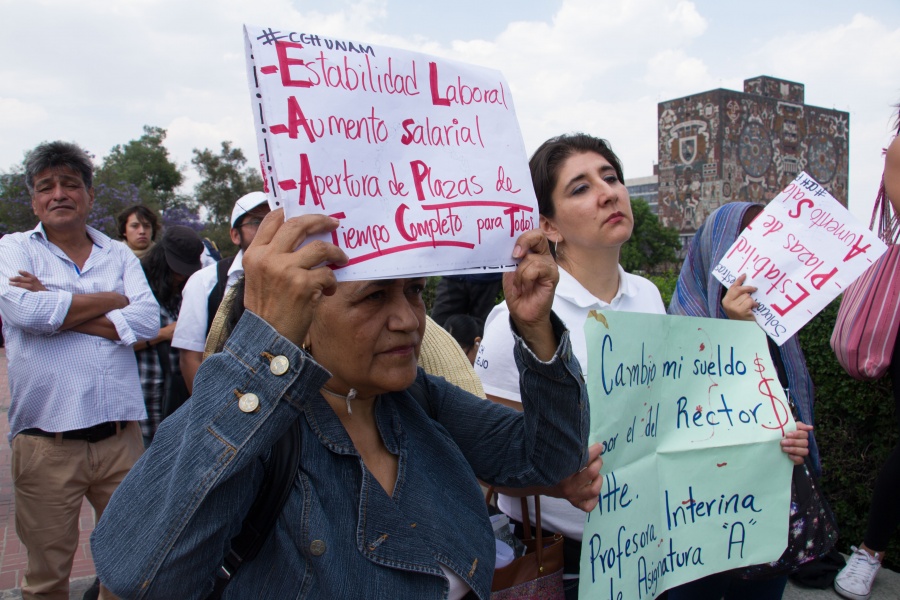 The teachers said they would initiate discussions for a new union.

On April 3, students and teachers of the National Autonomous University of Mexico (UNAM) took out a march “for the dignity of the teaching profession” and mobilized in Mexico City to demand an increase of 50% in salaries, end labor harassment and ensure security for students, among other demands.

They marched from the Parque de la Bombilla, a park located in the south of Mexico City to the UNAM vice-chancellor’s office, demanding that the university negotiate directly with the teachers who go to the classrooms and disregard the Autonomous Association of Academic Staff of the National Autonomous University of Mexico (AAPAUNAM) as their representative. The teachers condemned AAPAUNAM for not being in favor of the education workers, and for supporting the employer. They announced the formation of a new trade union and said the discussions around its formation would begin on April 6.

In response to the teachers’ demands, on April 2, in the afternoon, UNAM announced two teachers’ programs. One will generate 100 vacancies for high school teachers and the second will provide bonuses to graduation teachers. It also announced that it will hold a meeting on April 5 with AAPAUNAM to address the demands for better salaries and working conditions.

The march was carried out within the framework of a 72-hour strike, which began on April 2. Teachers and students of the National Preparatory School 6 and five campuses of the Colleges of Science and Humanities (CCH) of the UNAM, namely the CCH Naucalpan, Vallejo, Sur, Oriente and Azcapotzalco, took part in the strike.

The protesting teachers demanded that UNAM vice-chancellor, Enrique Graue Wiechers and other senior officials reduce their salary by 50%, as well as eliminate their quarterly bonuses and all kinds of extra payments. This is to facilitate a responsible redistribution of the university budget and help increase the salary of the academic staff.

The assembly of teachers condemned the poor working conditions of the contractual teachers, who receive paltry salaries, with no job stability and have to teach overcrowded classes which have up to 50 to 90 students. They also demanded discussions on a proposal to have a maximum of only 24 students in all academic groups from 2020-21 onward. Some of their other demands are a dignified retirement incentive, a higher budget for education sector and teachers’ improvement programs.

The protesters also condemned the murder of a 16-year-old student, Jennifer Sánchez Domínguez. She was a student of the CCH Oriente campus, and went missing on March 20. She was found dead 6 days later.

The students of the National Preparatory School 6 are also protesting against the university authorities for ignoring their complaints on sexual harassment. Recently, a number of acts of sexual harassment on the part of teachers were reported but UNAM did nothing to support the students.