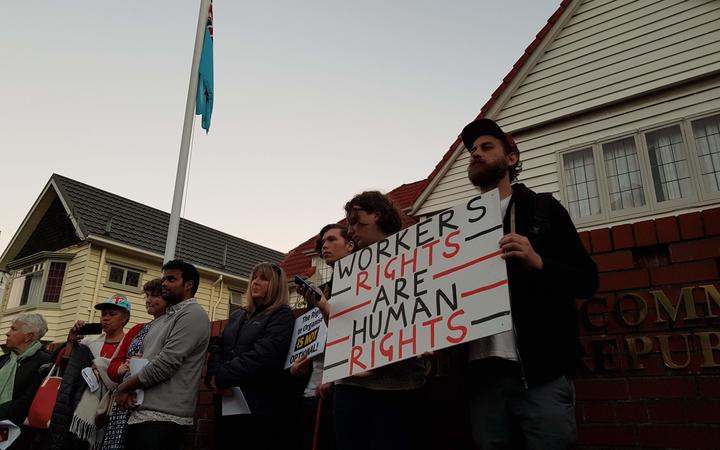 Ahead of May Day, Fiji authorities detained dozens of activists for organizing protest rallies. The arrests were made during the Asian Development Bank summit, that was hosted by Fiji for the first time from May 1 to 5. The union members were intimidated, accused of unlawful assembly, and their offices were raided by government forces. They were also forced to surrender their passports before being freed on bail.

Fiji Trade Union Congress (FTUC) general secretary Felix Anthony was arrested, along with over 30 members of the National Union of Workers, during a tripartite meeting with the government and business representatives to implement “labor reforms” in order to meet the requirements of the International Labor Organization (ILO).

Several unions had planned to carry out a series of demonstrations across the country that were to coincide with the summit. The prime focus the protests was to raise awareness among masses about the working class crisis, to highlight the issues of minimum wage, labor law reforms, and the right to strike. Recently, the Fiji Water Authority (FWA) terminated the contracts of around 2,000 temporary workers and asked them to reapply for jobs. A majority of those arrested were workers who were earlier protesting the termination by the FWA.

Anthony was scheduled to appear at a tribunal hearing on the Water Authority case on behalf of the National Union of Workers. After being jailed overnight, he was freed without any charges, along with other union officials. But 28 FWA workers were charged with unlawful assembly by the police. They were granted bail under tight restrictions, including a 6 pm to 6 am curfew, surrender of passports, and a cash bail bond of USD 100 each. They are due to reappear in court on May 24 for a plea hearing.

Anthony’s arrest generated a solidarity campaign within the international trade union movement. Officials of the ILO also called for his release, demanding an end to repression against trade unions and their members.

IndustriALL Global Union general secretary Valter Sanches wrote a letter to the prime minister of Fiji, Frank Bainimarama, saying that freedom of association is one of the primary safeguards of peace and social justice. “Workers have the right to express their views and defend their interests, including through peaceful demonstration, in an atmosphere free of fear, coercion, repression and violence. The arrest and detention, even if only brief, of trade union leaders or union members for trade union activities is contrary to the principle of freedom of association,” he wrote.