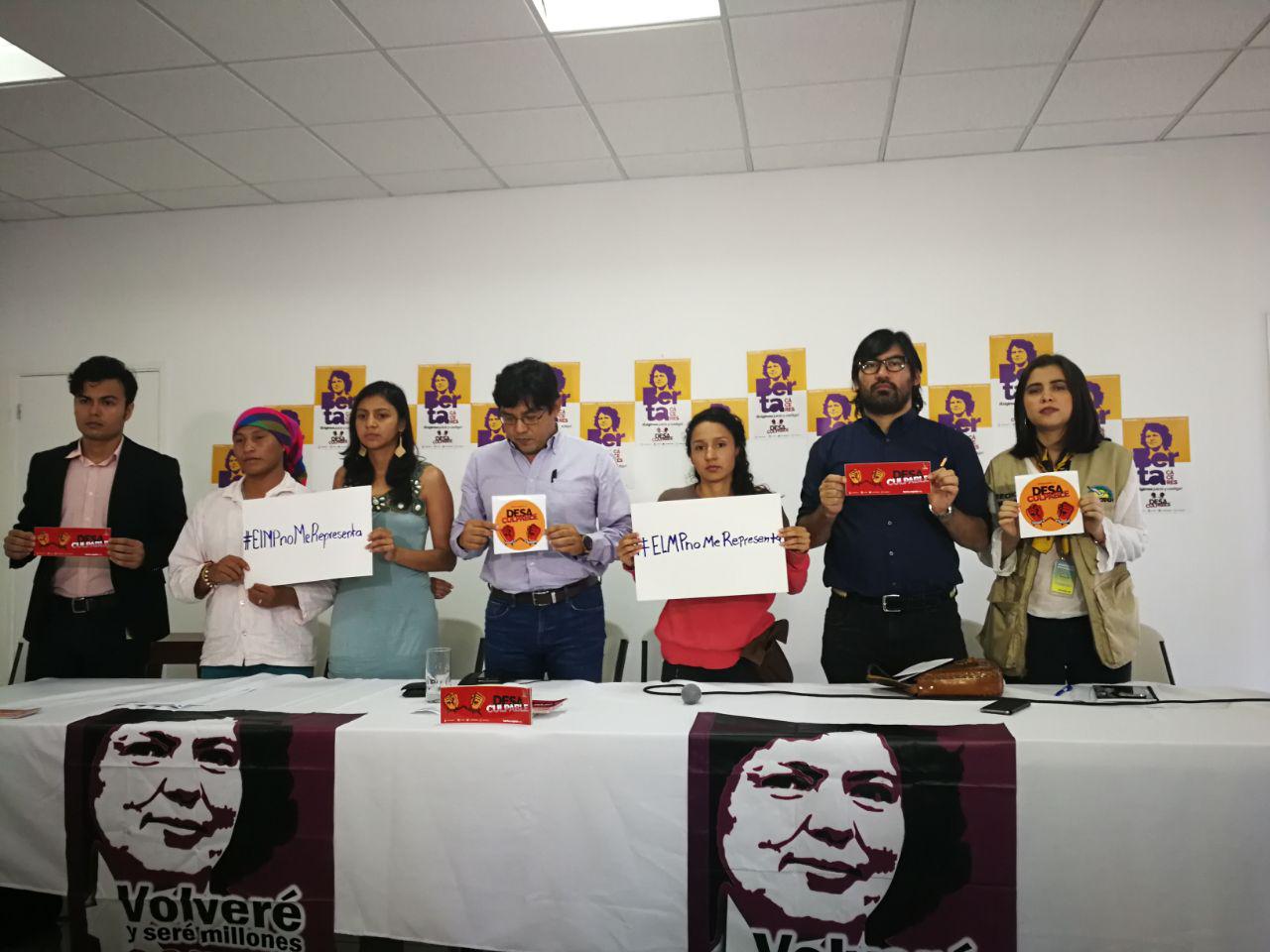 The family of Berta Cáceres, members of COPINH and their legal team declare their rebellion against the illegal trial. Their signs say "The Attorney General does not represent me". Photo: COPINH

The latest chapter in the trial of the eight men accused of the assassination of indigenous environmental activist Berta Cáceres and the attempted assassination of Gustavo Castro has infuriated those seeking justice for these crimes. On October 19, the first circuit criminal court removed the legal team of Cáceres’ family and of Gustavo Castro from the legal proceedings, after illegally resuming the trial. The court imposed the attorney general of Honduras as the victims’ representative, claiming that the victims’ legal team had “abandoned” the process.

The trial was scheduled to begin on September 17 but was suspended after the victims’ legal team sought legal action to disqualify the judges of the court hearing the case. This was due to irregularities and the failure of the judges to uphold the rights and protections of the victims. The legal action was rejected by the court. However, the legal team appealed the decision, and this process is still on, as are hearings on several other appeals they filed.

Nearly a month later, on October 15, the court called for the trial to resume. Due to the unresolved appeals – specifically the request to disqualify the judges of the court – the victims’ legal team denounced the actions of the court to the attorney general, who after deliberating on the issue decided to suspend the trial. On Friday, October 19, the court again called for the trial to resume, and as the appeals had still not been resolved, the victims’ legal team deemed the trial illegal and was not present.

Despite their absence and denouncements, the court proceeded (illegally) and declared that the victims’ legal team, composed of lawyers from the Broad Movement for Justice and Dignity (MADJ) and the Committee for Freedom of Expression (C-Libre), had abandoned the proceedings. The supposed abandonment of the trial by the victims’ legal team was the justification for removing them from the trial and assigning the attorney general to represent the victims.

The move comes after weeks of continued denouncements and legal injunctions presented by the victims’ legal team about the illegality of the proceedings and especially the behavior of the attorney general. Instead of facilitating information to the victims’ legal team and supporting the victims in their search for justice, the attorney general has been hiding, destroying and manipulating key evidence, and has shown no will to go after the masterminds of the crime.

Víctor Fernández, the legal representative of the family of Cáceres and a member of the MADJ team, stated in a press conference on Wednesday “The decision of the court to impose the prosecutors of the attorney general’s office, the same ones that are being denounced for committing abuse of authority, violation of the duties of the functionaries and disobedience to judicial orders, is offensive and is an insult to the dignity of the victims.”

The move has been strongly denounced by the family of Berta Cáceres, Gustavo Castro and the Civil Council of Popular and Indigenous Organizations of Honduras (COPINH), the organization Cáceres founded and was general coordinator of at the time of her assassination. In a communique, the victims declared their refusal to accept this injustice, and stated that “we will not participate in the farce that these judicial proceedings have become”.

They stated that, “The victims, along with our legal representatives, have exposed the serious collusion of all of the actors in the judicial system to prevent the truth about the crime against Berta Cáceres from coming to light and avoid the masterminds of her assassination – who are not present in these proceedings – from being brought to justice…We have exposed the lack of access to information, the investigative failures of the attorney general, the destruction and manipulation of evidence, the lack of will to go after the masterminds, the failure to protect the rights of the victims and even of the accused and that is the reason they seek to exclude us.”

Fernández commented, “We are not interested in the farce that they are creating, nor that they condemn whomever for whatever. They want to hide the full truth about the crime, protecting those who orchestrated, planned and financed the assassination of Berta. This is why we will not participate in this farce and we are determined to use every last option to guarantee effective participation and a just trial.”

Since the court’s decision, COPINH has carried out daily rallies outside the court denouncing the illegal trial and demanding that the victims have representation. Their commitment to justice remains resolute, they stated in the communique: “If the sentencing court presided by Esther Carolina Flores thinks that they can silence us or stop our search for justice, they are mistaken. We will not rest until all of the masterminds of the assassination of Berta Cáceres and the attempted assassination of Gustavo Castro have been punished.”