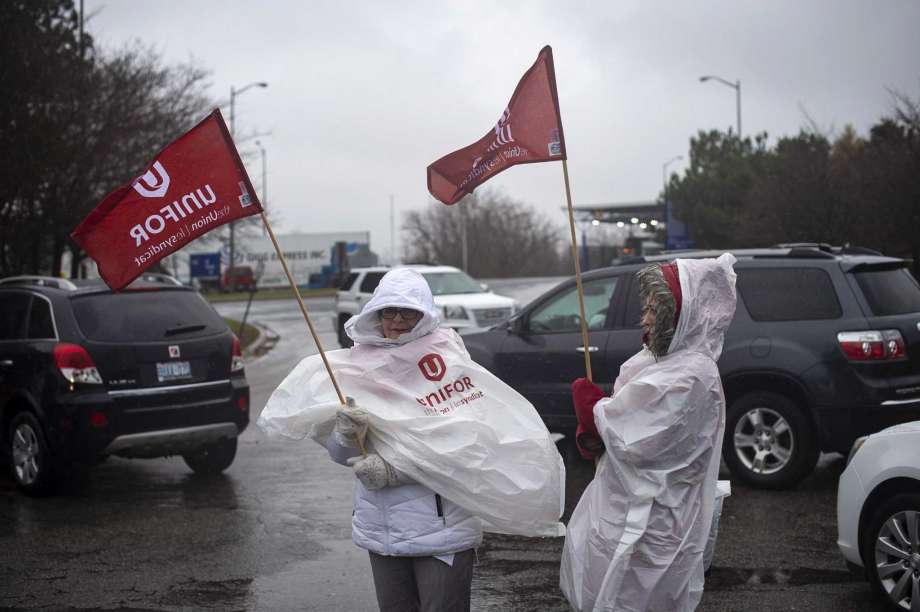 Hundreds of workers belonging to the Canadian trade union Unifor staged a walkout from General Motors (GM)’s Oshawa assembly plant in Ontario on November 26, Monday. They were protesting a decision by GM to close down five of its North American assembly and propulsion plants next year, including the Oshawa facility.

GM is also reportedly closing the Hamtramck assembly plant in Detroit and the Lordstown plant in Ohio. Production in these factories will cease on June 1 and March 1 respectively. The transmission plant in Warren, Michigan will stop production on August 1, and the Baltimore transmission plant would end operations on April 1, the Columbus Dispatch reported on Monday. The Canadian plant in Ontario will stop production in the fourth quarter of next year.

Besides its North American plants, the biggest carmaker in America is also reported to have said that production in three factories outside North America will cease by the end of next year, one of them being the plant in Gunsan, South Korea.

Overall, the closing of these plants entails the loss of jobs for approximately 14,700 white collar and blue collar workers in North America. This would amount to a nearly 8% reduction in GM’s 180,000-strong workforce.

Unifor, Canada’s largest private sector trade union, in a statement on Sunday, said that it had received a notification from GM about a major announcement.

“While the union does not have complete details of the overall announcement we have been informed that, as of now, there is no product allocated to the Oshawa Assembly Plant past December 2019. Based on commitments made during 2016 contract negotiations, Unifor does not accept this announcement and is immediately calling on GM to live up to the spirit of that agreement,” the union’s statement went on to say.

The union also noted that it would be holding a discussion with GM on this issue on Monday. The Oshawa plant has more than 2,500 unionized workers and 300 salaried employees who will be affected by the closure decision. Unifor Local 222 shop chairman Greg Moffat said on Monday the plant is not closing “without the fight of our lives.”

GM says that it is closing down the plants to cut costs and to also focus more on hybrids and zero emission vehicles, citing declining sales of sedans and the effects of US president Donald Trump’s policies. For example, the company says that the steel tariffs imposed by the Trump administration earlier this year cost the company $1 billion. On the contrary, the company reported net profit of $1.1 billion in the first quarter of 2018, with the pretax profit being $2.6 billion. In the second quarter of 2018, GM reported a net profit of $2.4 billion, up 44% from last year’s level. It reported a similar $2.5 billion net profit in the third quarter.

The company says that its decision to close these plants will end up saving $6 billion in cash by the end of next year, including $4.5 billion in recurring annual cost reductions and a $1.5 billion reduction in capital spending.

The average GM’ assembly line worker gets an average total annual pay of $41,365. In comparison, the Chairman and Chief Executive Officer (CEO), Mary Barra, received an annual total compensation of $21.96 million in 2017, highlighting the striking disparity in income and job security between the top executives and the ordinary workers of the company.