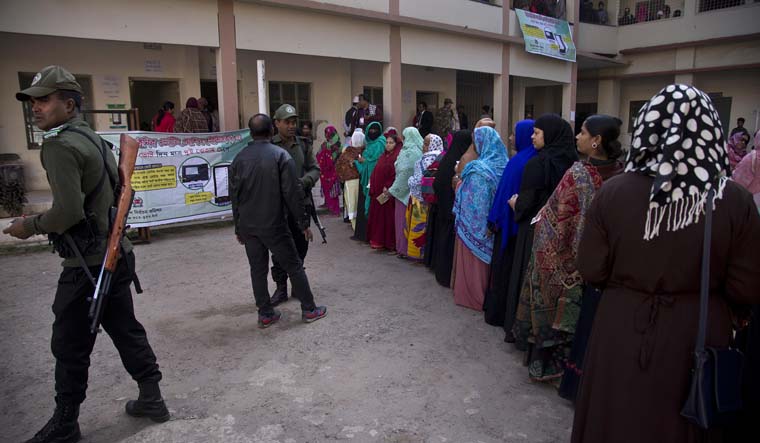 The ruling Awami League (AL)-led Grand Alliance coalition, helmed by prime minister Sheikh Hasina, was declared the winner of the 11th general elections held in Bangladesh on December 30. The results were announced amid numerous reports of violence and electoral malpractice across various constituencies. Opposition parties rejected the electoral verdict, deeming it “farcical.” They demanded that fresh elections be held under a neutral governing body. Chief election commissioner Nurul Huda rejected the opposition’s demands.

Elections were held for 300 seats which, combined with the 50 seats reserved for women, comprise the Jatiya Sangsad (Parliament). The major contenders in the election were the Grand Alliance and the Jatiya Oikya Front or National Unity Front (NUF) –  a coalition of opposition parties led by the Bangladesh Nationalist Party of the imprisoned former PM Khaleda Zia. The National Unity Front was led by Kamal Hossain. The Grand Alliance secured 288 seats while the National Unity Front was able to secure only 7. An order for a fresh round of voting was issued in two constituencies – one due to violence in the voting centres and the other due to the death of a candidate a few days before the election. The Left Democratic Alliance, a coalition of 8 left-leaning parties, including the Communist Party of Bangladesh, Ganatantrik Biplobi Party, and  the Revolutionary Workers Party of Bangladesh, among others – also contested the elections but was unable to secure any seats.

The 2018 elections were significant for various reasons. For many, the 11th general elections signified the first ‘legitimate’ election in the country in over a decade. This is due to the fact that the 2014 elections were boycotted by all major opposition parties, alleging government misconduct. As a result, nearly 153 seats were left uncontested out of which 127 were won by the Awami League by default which inevitably contributed to its victory with a majority of 234 seats, marking Hasina’s third term as Prime Minister.

PM Hasina’s decade-long term was marked by an almost three-fold increase in the rate of growth of the economy, bringing the 2017-18 estimates to around 7.8 per cent. This period also witnessed exponential growth in the country’s garment sector which comprises more than 80% of the economy. Moreover, the Hasina government also gained international favor after it announced that it would let more than 700,000 Rohingyas seek refuge within the Bangladeshi territory.

However, Hasina’s tenure was also marked by allegations of extrajudicial killings, government overreach into judicial matters, forced disappearances, and attacks on, and attempts to, silence the media and  opposition. The administration was also accused of stifling the exercise of free speech and freedom of the press, especially after the enactment of the draconian Digital Security Act. The DSA, with provisions pertaining to detention, censorship and imprisonment, was widely condemned both within the country and by the international community.

Opposition parties alleged that more than 10,000 members had been wounded and nearly 8,000 had been arrested in the time leading up to the election. Nearly 600,000 armed forces personnel were deployed across the country to maintain order on the day of the elections. According to estimates made by The Daily Star, an English language Bangladeshi newspaper, nearly 26 incidents of violence took place on December 30, leaving 19 dead and nearly 200 wounded.

The Bangladesh Telecommunication Regulatory Commission issued an order to all mobile operators, stating that internet services would be shut down until midnight on the election day. The Daily Star also published reports of voting irregularities, the stuffing of ballot boxes by Awami League officials, altercations between voters and police in voting centers, instances of voters being turned away, and voting agents from the opposition coalitions being barred from entering the voting centers. There were also reports of polling stations being closed for “lunch breaks”, voting being suspended in 22 centers, and the counting of votes being done in an unrealistically short period of time. Opposition candidates in 43 constituencies allegedly boycotted the election owing to rigging, violence, and intimidation.

Opposition parties have overwhelmingly rejected the electoral verdict. In a statement to Reuters, NUF leader Kamal Hossain said, “We’ve had bad elections in the past but I must say that it is unprecedented how bad this particular election was. The minimum requirements of a free and fair election are absent.”

However, chief election commissioner Huda claimed that the voter turnout was 80% which stands in stark contrast to the low voter turnout reported by multiple media organizations throughout the election day.

Transparency International Bangladesh, a branch of Berlin-based anti- corruption civil society organization, has demanded a judicial inquiry into the incidents of violence and violations of the electoral code of conduct.

On the one hand, the NUF and BNP declared they would hold strikes, demanding fresh elections. Moreover, leaders from the Left Democratic Alliance and the Islami Andolan separately announced that they would be launching movements to demand the formation of a new Election Commission. Opposition members have also demanded the resignation of the chief election commissioner on ground of bias.