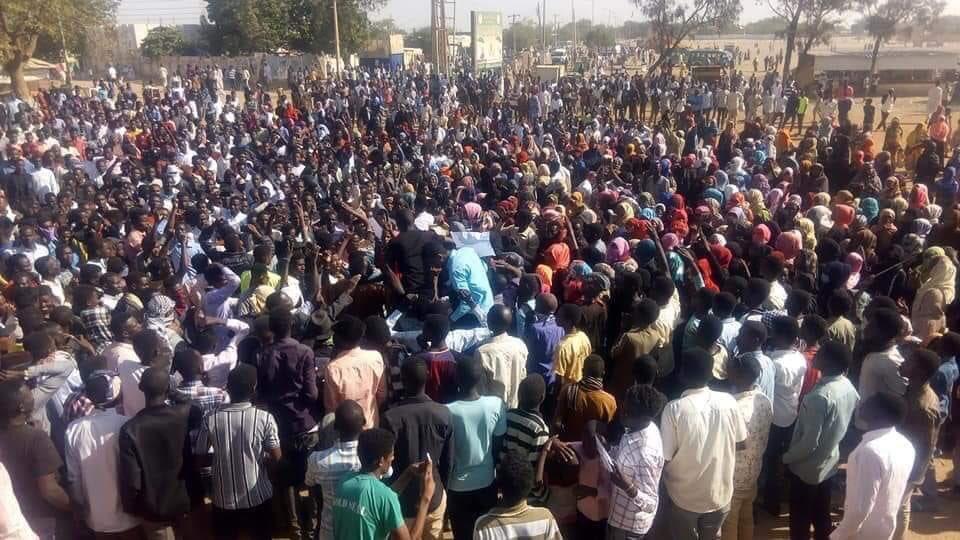 Sudan’s mass protests continued into the new year with thousands hitting the streets, demanding an end to president Omar al-Bashir’s 30-year-long rule. This was despite his instruction to the police regarding the use of lethal force against protesters. A large number of people took to streets across the country on Monday – on the eve of Sudan’s Independence day and the new year. The number of protesters killed by security forces since the beginning of the uprising on December 19 has reportedly exceeded 60.

In response to the call given by Sudan Professionals Association, doctors, lawyers, teachers and other professionals protested in the capital city of Khartoum. Dozens were detained, and many more were injured as the police and paramilitary forces used live bullets and tear gas to stop the march  from reaching the presidential palace, where the association intended to deliver a memorandum to the president, asking him to step down.

Apart from the slogans about freedom, justice and revolution, which have been raised since the beginning of the uprising, a new slogan – “You arrogant racist, all the country is Darfur” – was heard at the demonstration. This slogan was raised in solidarity with the 32 Darfuri students from the University of Sennar who were arrested, tortured and forced to confess that were a part of the rebel forces of Sudan Liberation Movement (SLM-AW).

The presidential palace was guarded by a heavy contingent of armed forces who had cordoned off the area with armoured vehicles and military trucks mounted with machine guns. An “unprecedented spread of security personnel, both uniformed and in plain clothes” had turned the centre of Khartoum “into military barracks”, Radio Dabanga reported.

As protesters in Omdurman – the second largest city about 25 kilometres to the north of the capital – began marching towards Khartoum city, security forces closed connecting bridges to stop them from reaching the capital.

300 km to the southeast of the capital, in the town of Sennar, lawyers took out another procession towards the court buildings with the intention of delivering a memorandum demanding that the judiciary remove Bashir from presidency. A number of doctors also participated in this procession.

However, before the procession could reach its destination, the protesting lawyers and doctors were violently attacked by security forces, who fired tear gas and charged at the demonstration with batons.

Condemning the use of live bullets and excessive force against unarmed protesters, the Sudanese Professionals Association said in a statement on New Year’s Eve, “We call on masses to continue demonstrating in all Sudanese cities and all neighborhoods this night and to turn all the celebrations of independence and New Year’s Day into wellsprings of revolution and demonstration until tomorrow morning”, adding, “This will continue every day, which will accelerate our goal of eliminating the rule of Bashir and his regime.”

The association also a signed a charter of demands, which includes the immediate and unconditional “withdrawal of Bashir and his regime from the rule of the country” and the “formation of a national transitional government….by the consensus of all factions of the Sudanese people to govern for four years.”

The charter also outlined a number of tasks this transitional government should be undertaking, which includes stopping the ongoing war in the Darfur region in western Sudan, and in the southern states of  South Kordofan and Blue Nile. In order to successfully accomplish this task, the charter called for the addressal of “the roots of the Sudanese problem and.. its effects, including the voluntary return of refugees and displaced persons to their places of origin.”

The charter also called for the trial of those security forces personnel who have violated the right to life, in accordance with relevant national laws and international conventions. Another task is the “[e]stablishment of a comprehensive constitutional conference to resolve all national issues and the formation of the National Committee of the Constitution.”

The transition government, the charter demands, should oversee a “process of transition from a totalitarian regime controlled by one party to a pluralistic system in which the people elect their representatives.”

Reaffirming that the association would continue to demonstrate on the streets, the charter called upon “our brothers and sons in all the.. [armed] forces to stand side by side with the people and the interest of the homeland.. and not to expose the unarmed citizens to death and abuse to protect Bashir and his regime.”

Insisting that the “police record is still clean, clear, and honourable”, the association warned, “Any slide into blind violence and shedding blood as the killer al-Bashir wants will undermine the credit of this great profession and will shame.. the martyrs”.

“So let al-Bashir, his brothers, and the fat cats go out to face the people whom [they have] humiliated, impoverished and despised, rather than you whose salaries are not enough for one week,” the statement read.