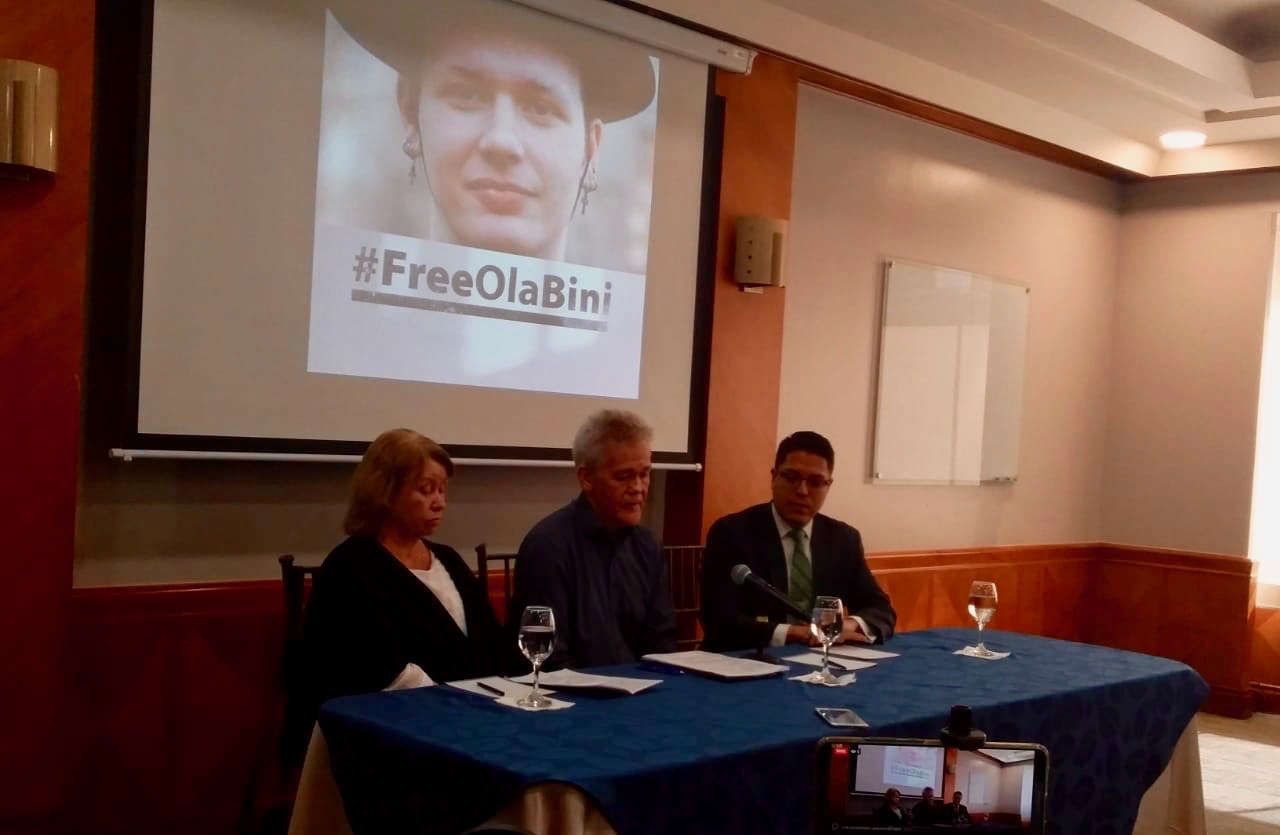 Parents and Lawyer of Ola Bini speak to the press on April 16, 2019 in Quito. Photo: Pato Marinera

The arrest and detention of Swedish software developer and privacy activist Ola Bini by Ecuadorian authorities has triggered international outrage. A host of organizations, including many from the technology sector, have mobilized in defense of Bini. He was arrested at the Mariscal Sucre International Airport on April 11 when he was trying to board a flight to Japan.

On April 16, a press conference was held in Ecuador’s capital, Quito, about the case.  At the press conference, in addition to Bini’s lawyer, Carlos Soria, his parents, Dag Gustafsson (father) and Görel Bini (mother) participated after having traveled from Europe to “bring their son home”.

Bini’s parents denounced the grave human rights violations suffered by him over the past few days. Ola Bini is a renowned Free Software developer and privacy advocate of Swedish origin and has been legally living and working in Ecuador for the past several years. His arrest was marked by a number of irregularities and a violation of his basic human and personal rights. After his arrest, Bini was held in detention for nearly 30 hours without a hearing and only was able to access a lawyer after 17 hours. He was also denied the right to an interpreter.

These grave human rights violations suffered by Bini were denounced by his parents and his lawyer at the press conference yesterday. They also highlighted that the Ecuadorian state was violating his “right to freedom of expression, the right to ideology, the right to legal guarantees”. Furthermore, the Swedish embassy was not notified upon the arrest of Bini, who is a Swedish citizen, violating international protocol on such matters. Until now, the diplomatic actions taken by the Swedish government to help their citizen are still unknown. In light of this, his parents asked Swedish authorities to “help them in all that they can”.

Bini’s lawyer in Ecuador, Carlos Soria, said that there were several “irregularities in the arrest of Ola Bini”. It was only on Monday, April 15 that it became public that he is being accused “alleged participation in the crime of assault on the integrity of computer systems” by the Attorney General of the Andean country. The court ordered a 90-day detention of the Swedish citizen while the case was investigated. Meanwhile, hsi accounts have been frozen and his home was raided.

During the conference, his parents pointed out that their son’s trip to Japan had been planned months ago, responding to claims that Bini had been attempting to flee Ecuador. Dag Gustafsson, Bini’s father, said, “It seems that in this government, the protection of rights and freedom of expression has decreased”.

Hours prior to his arrest, the Interior Minister of Ecuador Maria Paula Romo declared that the government was about to apprehend individuals who are supposedly involved in trying to establish a piracy center in Ecuador, including two Russian hackers, a Wikileaks collaborator and a person close to Julian Assange. She stated: “We are not going to allow Ecuador to become a hacking center, and we cannot allow illegal activities to take place in the country, either to harm Ecuadorian citizens or those from other countries or any government.” However, neither she nor any investigative authority has provided any proof to back these claims.

Following the press conference, his parents went to see their son in the center where he is currently being held. They reported that Bini had received several threats while there and fears for his safety.

Various and international organizations are part of a global campaign to #FreeOlaBini. The free software and digital privacy communities across the world see the detention of Bini as an attack on all who defend digital rights and security.

The Attorney General of Ecuador published photos of “evidence” that they collected from his home when they conducted the raid, and the photos displayed hard disks, USBs, computers and other electronic devices, standard for someone who is a software developer. Martin Fowler, Chief Scientist of Thoughtworks posted on Twitter after the AP reproduced the photo “From the AP article, it appears this photo is being used as evidence of suspicious material to support the detention of @olabini . How many of my readers have this much electronics (or more) in their house?” Several programmers, developers and other members of the free software community responded to the call published their own electronic devices.

How about this box of hard disks and the shelves of electronics behind me as "evidence" of #something? #FreeOlaBini @freeolabini pic.twitter.com/IbEETSJHgq

A letter in support of Ola Bini was signed by different international organizations in the tech community including, Chaos Computer Club, Electronic Frontier Foundation, Centro de Mídia Independente (Brazil) Democratic Alliance for Knowledge Freedom, Free Software Foundation Tamil Nadu, Free Software Movement of India, Free Software Movement Karnataka, Primavera Hacker, Chile, Coletivo Sarava, The Tor Project etc. They expressed their worry over the detention of Bini and denounced the irregularities in his detention and legal processing. His arrest and treatment in the media is also symbolic, “For years, our community, our work has been persecuted, smeared and criminalised. Bini’s case proves how vulnerable and unprotected we are, how easy it is to be targeted, and how easy it is for state actors to abuse their power arbitrarily against us” says the statement. They vowed to fight for his freedom, as “Ola devotes his life to everyone’s freedom”.

Article 19, a British human rights organization, released a statement calling for the immediate release of Bini and expressed their concern “that the arrest and illegal detention of Ola Bini is part of a crackdown against the community of developers who build digital security technology tools which enable Internet freedoms and secure communication online.” They also demanded that the Swedish government which claims to be a supporter of Internet freedom and digital security tools, the central work of Bini, should support demands for his release.

Members of the Cryptography, Security, and Privacy (CrySP) lab at the University of Waterloo released a statement on April 15 wherein they highlighted the contributions made by the privacy developer and advocate to contribute to to open-source privacy enhancing technologies. They asked for “immediate release and fair treatment of Ola Bini by the Ecuadorian government and for international oversight of Ola’s case” and called on those who work in the field of security and privacy to join them in manifesting solidarity and support to Bini.

The Tor project echoed calls to release Bini and stated, “One must question if lawfare practices are being used to attack those who defend freedom of information”. The Chaos Computer Club, a European network of programmers that works to develop and defend internet security and privacy also joined the call to demand the immediate liberation of Ola Bini as well as Chelsea Manning and Julian Assange, stating they “condemn these concerted attacks on journalists, whistleblowers and their supporters for what they are: shocking and coordinated violations of human rights and the freedom of press”.

A local digital privacy collective in Ecuador will hold an event, PET Night #25, #FreeOlaBini, Privacy and Criminalization of Knowledge, to honor Bini and share testimonies about the work he has done within the country to help share knowledge and information about digital privacy and security. Bini helped organize a monthly meetup called “PET NIGHTS”, Privacy Enhancement Techniques Nights, where he and others would share tools and knowledge about tools one can use to protect themselves in the digital world. The organizers stated, “we want the country to get to know the work of Ola, and for his rights to be respected as well as due process. There is an open invitation to all of the media, so that they understand that this is about activists and professionals in technology and not criminals as it is stated in the media”.

When the press conference finished, the parents of Bini distributed a communique, the text is below:

“As parents of Ola Bini, we are here to see Ola, hug him and assure ourselves that he is safe and in good health.

We also want to ask the authorities in Ecuador to free him, because we know he is innocent of what they accuse him of.

We ask the Swedish authorities to help us in everything that they can.

To you all, the press, we ask that you share this message to support Ola.

Only recently, we learned that what our son is being accused of is “assault on the integrity of computer systems”. Our son has not attacked the integrity of any system private or public. We spoke yesterday with the lawyers of Ola and we learned of the several and serious irregularities during his arrest, which worry us as parents.

Ola has many friends, colleagues and ex-colleagues from across the world that are worried and ready to help us in this situation and publicly express their solidarity.

Since his childhood, he has always worked with computers. This has always been his life.

Ola works in an non-profit organization as a software developer, above all in the digital aspects of essential human rights like freedom of expression and personal integrity on the Internet. Ola is passionate in all of these issues.

For us it is difficult to imagine that Ola is mixed up in these accusations. In our experience, Ola has always been on the correct side.

Ola is an honest and considerate person. He is loved by all of his family and friends.

We are here, in Ecuador, to bring Ola home.”

*With reports from Ecuador Today 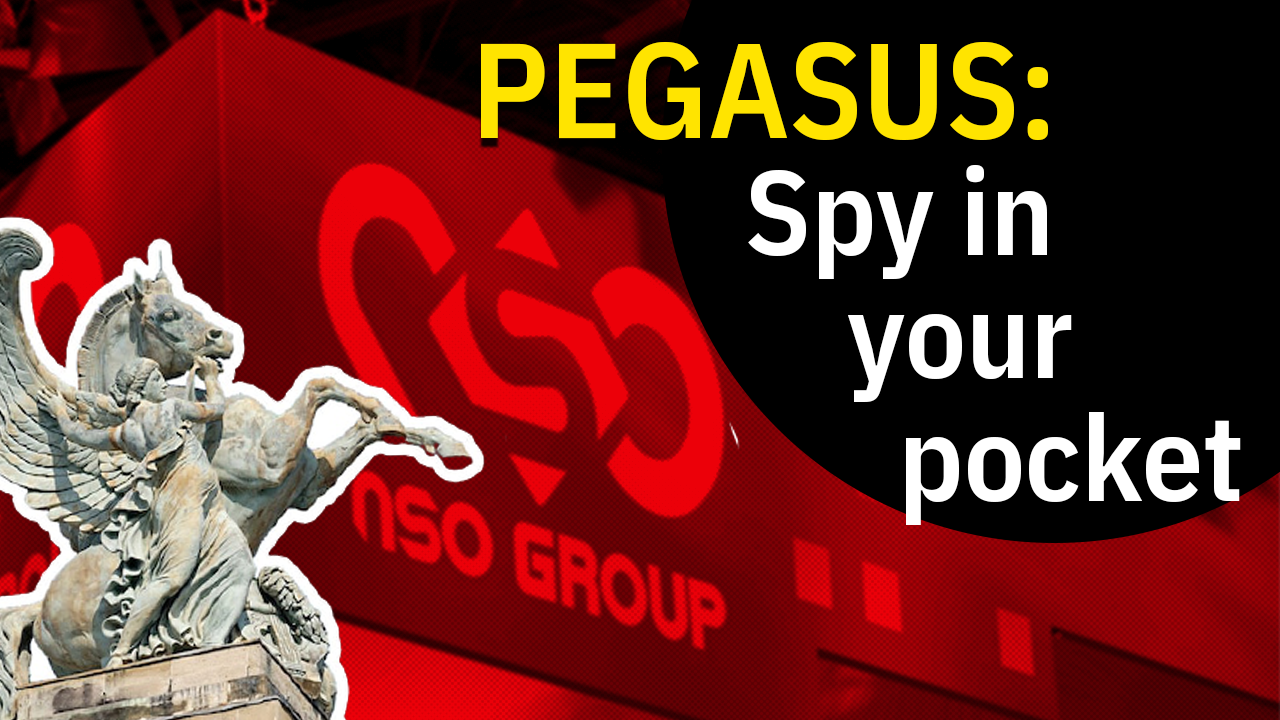 Pegasus spyware: How it works, who were the targets