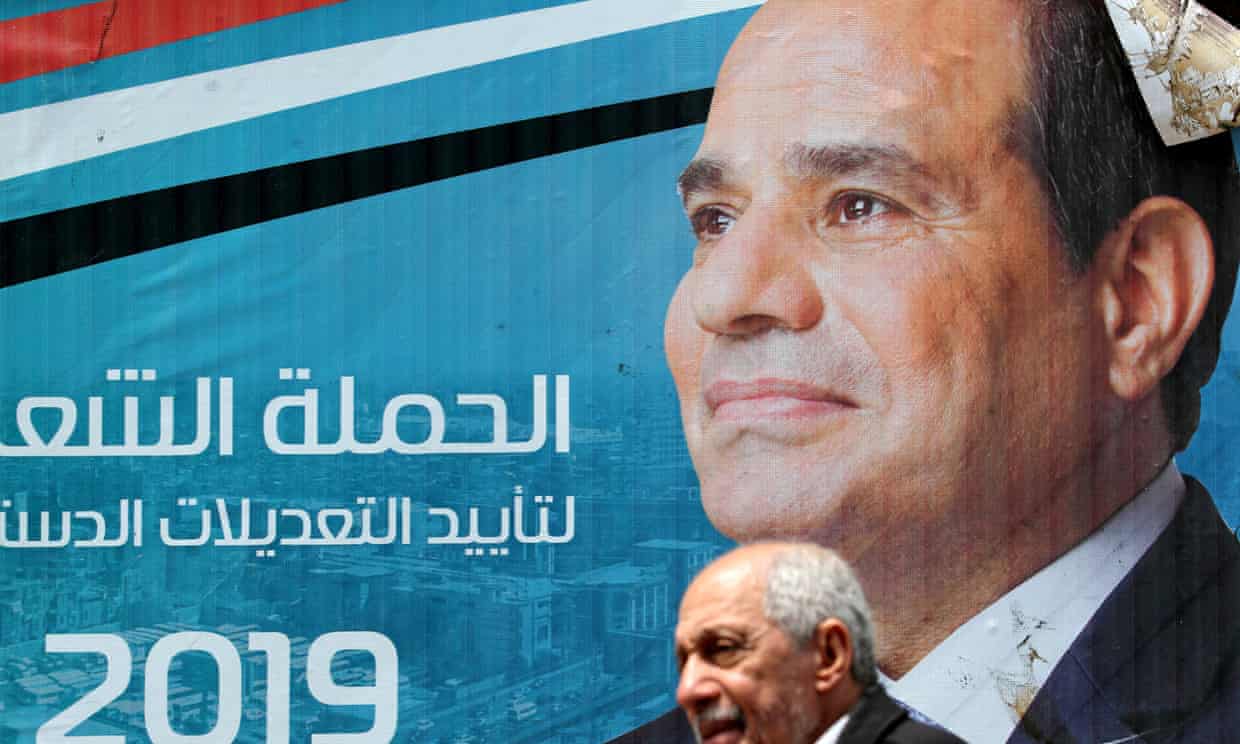 The government has cracked down on bids to question the legitimacy of the referendum and that of president Abdel Fattah El-Sisi. Photo: Mohamed Abdel Ghany/Reuters

A three-day national referendum commenced in Egypt on April 20 on a wide range of constitutional amendments, including extending president Abdel Fattah El-Sisi’s stay in power until 2030.

On April 16, the Egyptian parliament approved the amendments by a margin of 531 to 22 votes. They will have to be passed in a country-wide referendum before coming into effect.

If passed, the amendments will extend a president’s term in office from 4 to 6 years. A special article proposes extending Sisi’s current term of four years, due to end in 2022, by another two years. He will also be able to run for one more time, and may thus stay on in power till 2030.

The amendments also provide for a 25% quota for women in the parliament, the formation of a 180-seat upper house (Senate), one or more vice-presidential posts, and representation for workers, farmers, youth and people with special needs.

At the same time, they also allow the president to appoint top judges and bypass judicial oversight in reviewing draft legislation. The amendments give the military a greater role in the political life of the country, declaring it the “guardian and protector” of the state. They also grant military courts wider jurisdiction in trying civilians.

Critics of the proposed amendments have termed them as “another step back to authoritarianism”. In 2011, massive protests as part of the Arab Spring had overthrown the authoritarian dictator, Hosni Mubarak.

A coalition of various liberal and left-leaning opposition parties, called the Civil Democratic Movement, has called the amendments an “assault on democracy”, and urged voters to break the “barrier of silence” and vote “no” in the referendum.

Speaking to Peoples Dispatch, Mohamed A the Bread and Freedom party said the referendum was a culmination of a process that began with El-Sisi trying to constitute a new class after coming to power. “El-Sisi is an expression of the reactionary forces inside the military system that seek to be part of the state wealth and governing businesses. But he has become immensely unpopular due to the astronomical rise in the prices of commodities, the collapse of public services, including transport and education, and the debt crisis,” he said.

He added that the suppression of young voices, forced disappearances of activists and members of political parties and attacks on social organizations were all part of a pattern.”El-Sisi has been consistently trying to remove any possibilities of resistance from all institutions for years. He wants to make all institutions loyal to him. Thus, his regime seeks to change and remove one of the last remaining benefits of the 2011 revolution, which is the term limits on the presidency,” Mohamed explained. The ultimate aim would be the brutal repression on all forms of organizing by the working class and the people in general, he added.

Media organizations reported a massive crackdown on any views critical of the referendum. This includes the removal of posters. The government has also blocked more than 34,000 websites in an attempt to restrict the opposition’s ‘void’ campaign (referring to their view that the government’s legitimacy is “void”). This campaign was launched to mobilize Egyptians to vote against the amendments. Meanwhile, massive posters endorsing the amendments have come up across Cairo. Many of these are believed to have been paid for by pro-government parties, businessmen and MPs.

Mohamed noted that around the time the amendments were announced, some youth had staged a protest against a train accident in Cairo but were promptly arrested. “Sisi needs to try to prove to the international community that he enjoys popular support. So he is getting the national security forces to pressurize people into publicly supporting the amendments. Simultaneously, there is also increased suppression of activists and political parties,” he added. Three members of his party have been arrested so far.

El-Sisi’s government has come under heavy criticism from human rights groups for crushing political dissent and brutally clamping down on its opponents. He came to power in a bloody military coup in 2013 against president Mohammed Morsi. Sisi, who was the military chief at the time, subsequently won his first term as president in 2014 with an astounding 97% of the votes, and got re-elected in 2018 with an equally staggering 97.8% of the votes, after standing virtually unopposed.

Human Rights Watch said that in the past three years, 15,000 civilians, including children, have been referred to military prosecution in Egypt. Human rights groups have also reported the detention of at least 60,000 political prisoners and a blanket ban and brutal crushing of any kind of protests. The crackdown has been described as the worst in Egypt’s modern history.