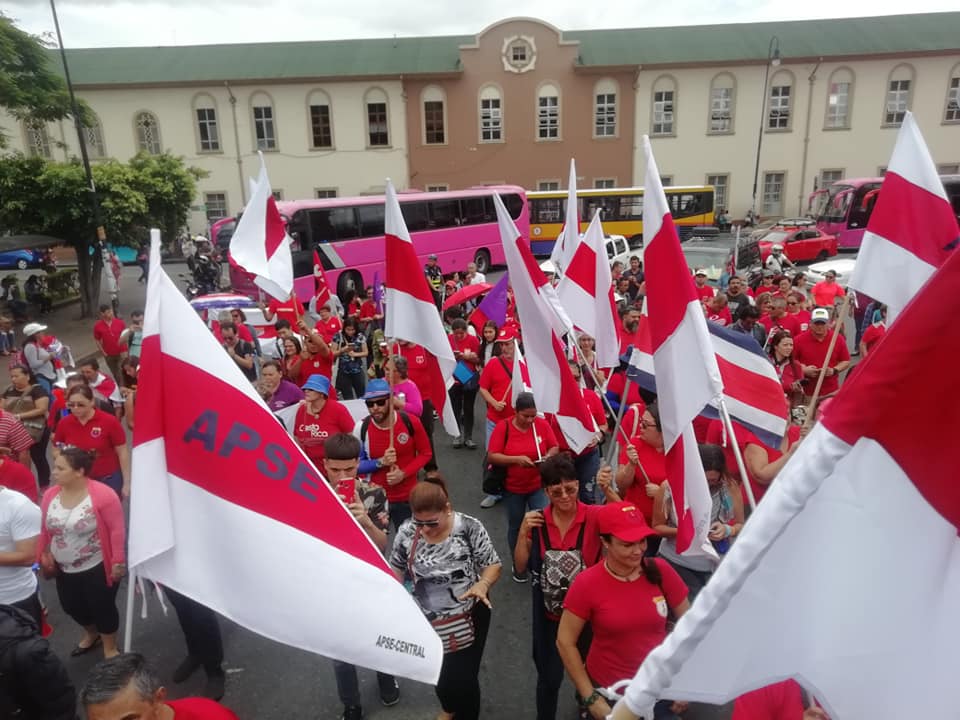 Demonstration demanding the resignation of the education minister outside the Ministry of Public Education on July 1. (Photo: APSE/Facebook)

After mobilizing for a month in defense of public education, on July 12, the representatives of the national educational workers union, the Association of Secondary Education Teachers (APSE), met with the new Costa Rican education minister, Giselle Cruz Maduro, to find a solution to their demands. Although the meeting didn’t address the substantive issues, the minister supposedly expressed her willingness to find a solution to the problems affecting the education sector. The next meeting between the APSE and the Ministry of Public Education (MEP) is scheduled for July 23.

On June 6, Costa Rican students and teachers began mobilizing across the country against a series of regressive reforms in the education sector promoted by the government of President Carlos Alvarado. The mobilizations were carried out within the framework of an indefinite strike organized by the APSE.

The students and teachers have been opposing the dual education bill no. 20786, the anti-strike bills no. 21049 that threatens the right to protest, the essential services bill no. 21097 that seeks to include education as an essential service where going on strike would be prohibited, the pension reform bill and the bill of public employment law. APSE considers that these reforms are anti-workers and pose a threat to their rights. They are also demanding infrastructural improvements of all public educational establishments.

On July 1, the former education minister of Costa Rica, Edgar Mora, resigned from his position following a massive protest outside the education ministry, calling for the same. The protesters cited that he does not have enough experience for the position and accused him for blocking communication channels and preventing negotiation opportunities with the government.

The next day, on July 2, the president and general secretary of the APSE attended a meeting in the presidential house and met with President Alvarado, Second Vice President Marvin Rodríguez and other ministers. In the meeting, President Alvarado assured to open a medium of direct dialogue between the MEP and the APSE to find a solution to the issues raised.

Dual education reform promotes that students above 15 years take up internships in private companies during the last years of their higher education in exchange for training, which the government claims would give them an early exposure to employment sector.

The APSE and various students unions criticize this reform and consider it as a threat to the future of higher education and dignified employment opportunities in Costa Rica. “We oppose this initiative because its purpose is to put Costa Rican education at the service of business chambers, creating cheap labor, and training obedient staff with a minimum of general or academic education, without guaranteeing their constitutional or labor rights,” said the APSE in a statement.

During the month of June, in the midst of the protests over educational reforms, Costa Rica also experienced several other demonstrations called for by different social sectors such as fishermen, peasants, doctors and cargo transporters. Workers of all these sectors extended their solidarity with the striking students and teachers and mobilized with them on July 1. These social sectors also protested against the implementation of value-added tax (VAT) of 13%, which came into force since July 1 and is applied on a number of services that were excluded from the previous tax. They believe that VAT is an extra burden on the pockets of the working class and are demanding its immediate withdrawal.