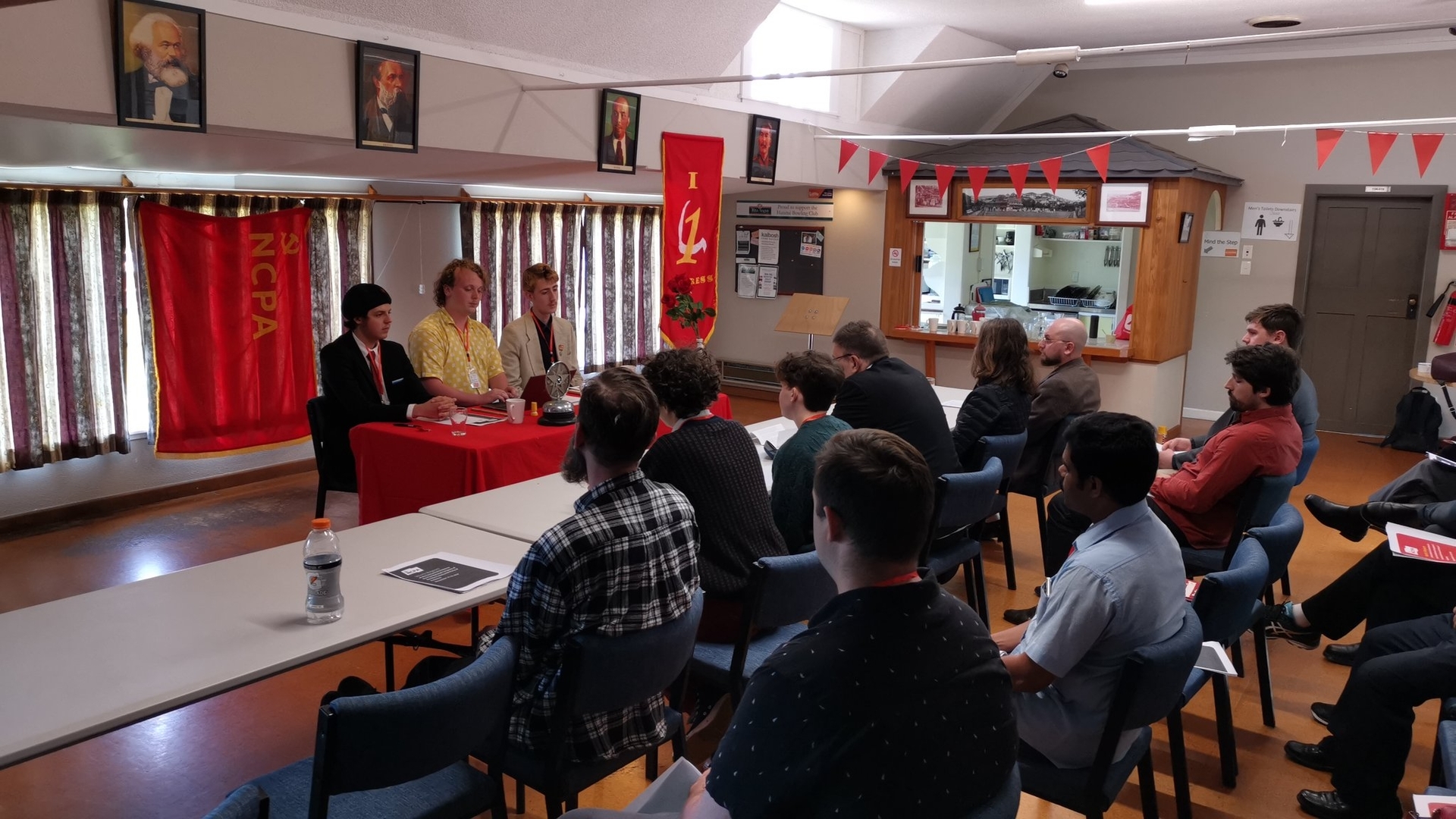 The New Communist Party of Aotearoa held its inaugural First National Congress in Wellington on November 21-22, 2019

In November 2019, the New Communist Party of Aotearoa held its first party congress, marking a new phase in the communist movement in New Zealand. Peoples Dispatch (PD) talked to Katjoesja Buissink, chair of the central committee of the party, on the trajectory of the organization and its perspectives on trade unionism and international solidarity.

Peoples Dispatch (PD): Could you tell us a bit about the first National Congress of the New Communist Party of Aotearoa that was held in November 2019.

Katjoesja Buissink (KB): The New Communist Party of Aotearoa held its inaugural First National Congress in Wellington on November 21-22, 2019. While for any communist party, a National Congress is an exciting event and the most important time of party life, this founding congress was significant as it marked the first time New Zealand had a communist party since 1994, when the Communist Party of New Zealand officially wound down.

The CPNZ was formed in 1921, largely by New Zealand socialists who had been inspired by the then-recent success of the Great October Socialist Revolution in Russia. Recognizing the Labour Party’s bourgeois character after it failed to condemn the SPD’s role in the deaths of Rosa Luxemburg and Karl Liebknecht during the German Revolution, they left the Labour Party and went on to found the CPNZ two years later.

What made the CPNZ notable is that it was the only ‘Western’ party to side with the Communist Party of China during the Sino-Soviet Split. From the start of the split until 1978, the CPNZ enjoyed incredible relations with the Communist Party of China. Several visits to the CPNZ to China occurred, which were given the same treatment as a state visit would. The two parties’ central committees even issued joint statements on the International Communist Movement and anti-revisionism.

Sadly, this relationship was not to last. The CPNZ took the side of Albania during the Sino-Albanian Split in 1978 and then broke with Albania in 1990 during Alia’s “Trotskyite coup” which led to the restoration of capitalism. Ironically, only two years later, the CPNZ leadership took a liquidationist turn and dissolved the party into a Trotskyite organization in 1993.

At each of these stages, the minority faction split off from the CPNZ to form a splinter party, such as the pro-USSR Socialist Unity Party, which dissolved at a similar time. These splits greatly weakened the unity of the communist movement and damaged its ability to link with the working masses due to sectarian infighting.

The New Communist Party, therefore, represents both continuity and rupture with the 20th century communist movement in New Zealand. As I said in my opening speech to the Congress, “We are not born from the void, but as a result of the workers’ struggle both internationally and at home in New Zealand.” Both the victories and failures of the last century are notable examples for our Party to build off.

The First National Congress highlighted one of the biggest failures of the last century – the splits and atmosphere of both left and right opportunism that dominated its second half. The same opening speech set the tone for party work as one of Marxist-Leninist unity, as well as standard practice of resolving differences through comradely debate.

PD: Could you talk about the areas of the work of the New Communist Party of Aotearoa, especially its relationship with labor unions?

KB: The New Communist Party of Aotearoa has, since even before the First National Congress, agreed to focus on union work and building a class-oriented, mass workers’ movement by both strengthening and expanding unions. The First Central Committee created the slogan ‘one class, two unions’ several months ago to guide party work in this field, and this was reaffirmed by the First National Congress and its political resolution. ‘One class’ sets out the frame of reference for our Party – we are a class-oriented and proletarian party. ‘Two unions’ refers to our main political strategy for how we build a mass workers’ movement in this period of party work: both labor unions and a community union.

Labor unions are, as Comrade Lenin referred to them, “schools of communism”, and the vital foundation of the workers’ movement. Therefore, they are also the most important component of our Party work. Our work within labor unions exists on two fronts, both strengthening existing unions and expanding the union movement by creating new, class-oriented and militant unions where such a union does not already exist. For example, we have party committees and/or branches in several existing unions, such as the NZ Nurses Organisation, FIRST Union and E tū. These are beginning to work on various issues that members of those Party organizations flag through being active members of their workplace, such as gaining the living wage or reducing unhealthy shift hours.

We are also beginning work to build new militant and class-oriented unions where we have the capability to support workers in the relevant industry to unionize. Presently, we are providing advice and resources to hospitality workers, including party members, who recognize that a class-oriented union is key to better wages and working conditions and are currently setting up a union for their industry. This is helped by relatively-kind labor laws in New Zealand, which allow for a union to be officially registered with only 15 members, and collective bargaining to begin with only two members in that workplace. Their union should be registered and ready to start negotiations for its first collective agreement in the new year.

The onset of neoliberalism from 1987, brought in by the Fourth Labour Government no less, has made rebuilding the labor unions a key task for all communists and class-oriented workers. In 1985, 43.5% of the labor force was in a union. By 2018, this had dropped to 13.3%. Clearly, we all have a lot of work to do before there is any semblance of a mass workers’ movement in New Zealand, and this is why we work with all unionists and other class-oriented workers within the workers’ movement to revitalize it where we can.

The Aotearoa Community Union, a new mass organization of the working class founded by Communist Party members with the support of several trade unionists, is the second half of our ‘One Class, Two Unions’ strategy and possibly the most innovative and exciting aspect of party work in the founding period.

The ACU is inspired by tenants’ unions that exist in the United States and the United Kingdom, such as ACORN UK, where a lot of the early organizational and practical guidance for the ACU came from. Tenant unionism has a significant difference here however, as to a large extent, there are not the mega-landlords that exist in the USA or the UK, but a significant number of petty landlords. It is only through on-the-ground work that the big landlords have really been made apparent. The significant impact of this difference is that techniques such as rent strikes are not as easily available to a tenants’ union as in these other countries. The ACU will have to work to build ties with the masses and make itself a genuine mass organization for these significant tactics against landlord capitalists to be worth the risk of any political action of this sort.

This distinction has been made because we do not want the Aotearoa Community Union to have a narrow focus on tenancy issues just as some unions can get caught up in collective bargaining and forget the broader workers’ struggle. The Community Union, as a mass organization of working communities, should have the capacity to focus on broader issues such as public works, amenities and community life. In this way, the Community Union should have the ability to develop into essentially proto-Soviet power channeled into the form and name of a union. As it grows, Community Union branches will increasingly function as democratic and popular organs.

Of course, at the current stage, the Aotearoa Community Union plays a humble role and is largely limited to a few Wellington suburbs. At the moment, work has largely been initial door knocking, introducing ourselves to working communities and gaining a membership base outside of the initial activist base of New Communist Party and unionist core. This has been done quite successfully, and now the Aotearoa Community Union is beginning its first campaigns. We provide a free mold removal service to Wellington residents and are organizing Wellington City Council Housing tenants to fight for better conditions against WCC neglect. A petition we organized to WCC to fix an unhygienic rubbish system at one block of council flats got the support of over half of all the tenants, for example. As time goes on and the mass power in which the Aotearoa Community Union directs increases, we expect that it will become an important and novel part of working-class power in New Zealand.

PD: Could you talk a bit about the party’s perspective on internationalism?

In all, the New Communist Party of Aotearoa is off to an exciting start. Given the amount of work that is already underway, it is hard to believe that we only began founding work on May 1, 2019 and held our First National Congress in November. Communism never found a firm footing within New Zealand, and the workers’ movement, in general, is very weak here. Clearly, New Zealand communists have our work cut out for us. We lack a significant impetus for our founding, such as China’s May 4 Movement or the Communist International. But the work of our founding period and the political lines agreed on at the First National Congress have created have established the spark that will ignite the Party to forge future ties with the masses and hopefully usher in a new era of a class-oriented workers’ movement and communism on the edge of the world.