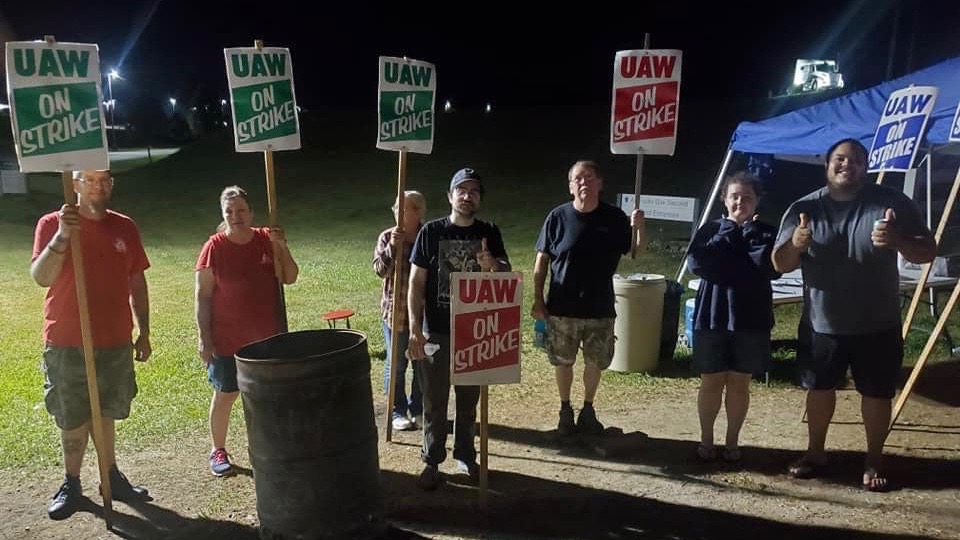 Workers continue their strike and picket outside the VTNA plant in New River Valley in Dublin, Virginia. Photo: UAW Local 2069

After rejecting an offer by Volvo Trucks North America (VTNA) for a third time this year, workers in New River Valley in Dublin, Virginia, are preparing for the company’s unilateral move to push through the tentative deal. In a statement released on Sunday, July 11, VTNA, declaring an “impasse” in negotiations, said that it is moving ahead with the latest contract offer and will restart production at its Virginia plant effective from Monday, July 12.

The latest deal – a six-year period contract offer struck between the company and the union’s bargaining team on July 1 – was rejected overwhelmingly by over 2,900 United Auto Workers members of the 3,300 employees in the Virginia factory in a vote held Friday, July 10. The vote held by UAW’s local branch, Local 2069, had over 60% of its members vote against the deal which does not meet their demands.

Even though the tentative agreement was rejected, it nevertheless had more acceptance among union workers than the last two deals which were rejected by over 90% of the members. Company officials have used this as a reason to go ahead with the deal even though the legitimacy of such a move is being questioned.

The company told union negotiators that the deal is its “last, best and final offer” and refused to continue bargaining. After the company’s announcement on Sunday, the UAW released a statement calling for a re-vote on the third deal, to be held on Wednesday, July 14. This has also raised concerns among workers and other local trade unions.

Travis Porter, the new chair of the bargaining team, insisted that the union is “still on strike, because the company has not given us a return to work date. We need everyone to strike until we have the vote on Wednesday.”

The ongoing dispute at the VTNA plant in Virginia began in mid-April this year after months of negotiations with the company failed to arrive at any desirable agreement for the workers. The first phase of strike began on April 17 and was called off by the negotiators two weeks later after the first tentative deal was proposed.

The vote on the first proposed contract deal was held on May 16 in which 91% of the union members rejected it and pushed the negotiators and the company back to the bargaining table. A second deal was proposed four days later, delaying the second strike action. However, workers found the second deal to be no different from the first and rejected it in a vote on June 6.

In the latest deal, the company has offered to eliminate the two-tier wage system and to put all employees hired on or before June 30, 2015, to top pay. It will institute a six-year wage progression to top pay for recently-hired employees, increase the new hire starting pay by 14%, and guarantee no increase in health insurance premiums. Workers have however shown dissatisfaction with the provisions for wage hikes, with 67% rejecting the “salary language”.

The New River Workers Powers, an independent workers’ union movement operating in the New River Valley region, also expressed disappointment at the UAW’s move to hold a re-vote. “They voted down the (third) offer from Volvo and because the company says they won’t negotiate further the UAW leadership has cancelled the last vote results and is forcing the workers to revote next Wednesday with the expectation to pass it,” read a tweet by the group.