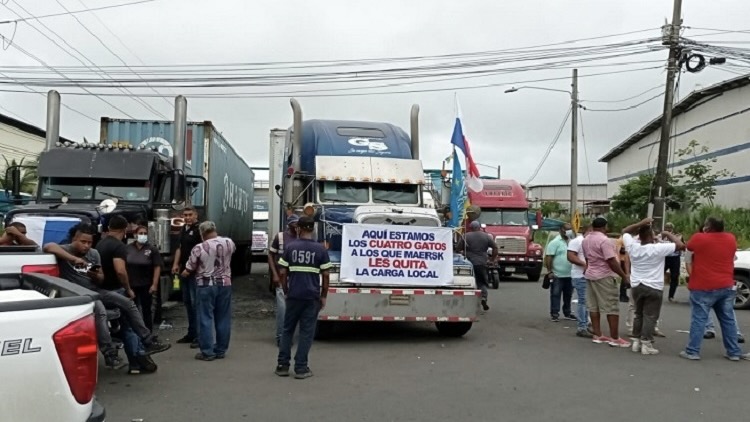 On September 23, Panamanian road transportation workers began an indefinite national strike against transnational shipping corporations, Maersk Line and Mediterranean Shipping Company (MSC), which seek to monopolize the logistics industry in the country. As a measure of protest, the workers blocked access to the Balboa and Colón Free Trade Zone ports. The strike was called for by the National Coordination of Containerized Cargo Transportation (CNTCC).

The CNTCC warned that the monopolistic practices by large companies can lead to the closure of many national companies and the consequent unemployment in the sector that provides at least 200,000 direct and indirect jobs. The union highlighted that the issue affects workers in land transport, customs brokerage, auxiliary services of maritime shipowners, supply chain and cargo agency, among others.

The workers are demanding that the government comply with Article 13 of Law 51 of July 2017, which mandates that the Panamanian State will not allow the concentration and control of the logistics activity in favor of any company, union, chamber, associations or group of independent carriers, to avoid monopolistic conditions. The union is demanding to meet with President Laurentino Cortizo, stressing that the various ministries and state institutions have failed to respond to their demands, with whom the representatives have been negotiating since 2019.

Edgardo Voitier, CNTCC leader from the Colón province, explained to local media that the abuses of shipping companies harm the whole country. “We are supporting the strike because this not only affects land freight carriers, but everyone, because these international shipping companies have been increasing international freight rates and that has repercussions. It has been increasing the cost of food, fuel and everything,” said Voiltier.

In an appearance before a local television station, the Vice Minister of Internal Trade and Industries, Omar Montilla, called on the workers to continue the dialogue process to resolve the differences. He expressed his concerns about the paralysis of the ports and the huge economic losses that the strike could cause.

Meanwhile, Gilberto Soto, president of the CNTCC, said that “they have not received a formal invitation” to establish a dialogue table with the national authorities. “We are willing to speak with the President of the Republic, Laurentino Cortizo Cohen, to issue an executive resolution that will serve as a guarantor to end the conflict,” Soto added.

On September 22, after the call for the strike was made public, business associations such as the Panama Maritime Chamber and the Association of Panamanian Shipowners supported the claims of the cargo workers.

The Panama Maritime Chamber, which is acting as a mediator, called on the government to intervene in the situation to avoid the consequences that the indefinite national strike may cause to the economy. “The strike measure not only harms all national sectors and industries, but also the international image of Panama,” warned the Maritime Chamber.

The Chamber of Commerce, Industries and Agriculture of Panama (CCIAP) also requested the parties to resume the talks, taking into account the negative impact that such a decision can have on the distribution of local merchandise, the commercial chain, the logistics sector and the economy in general.

Panama is considered as a robust and important logistics center within the region, therefore, it is essential that the causes that lead to these circumstances be addressed and resolved.