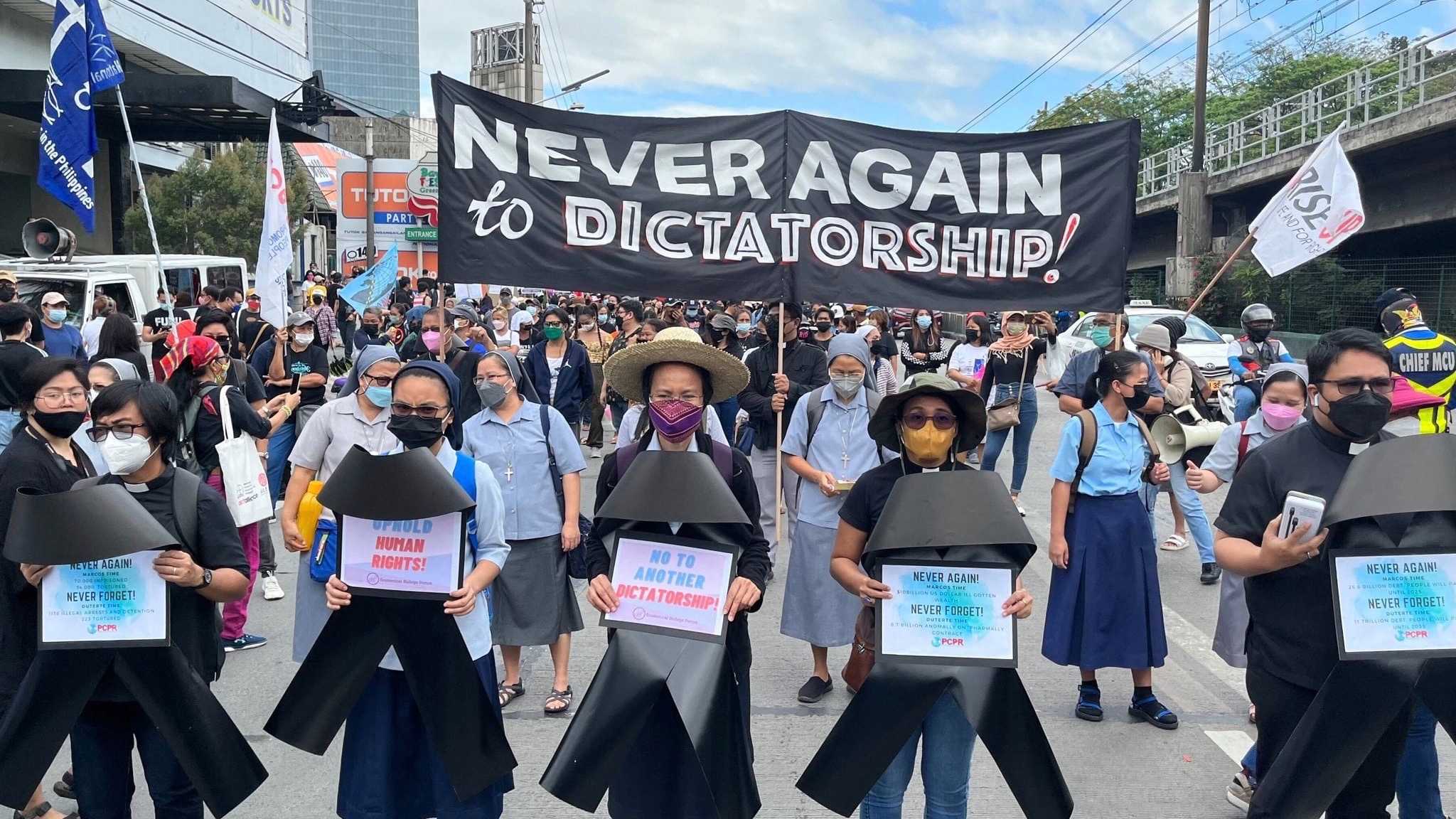 As the Philippines gears up for a high-voltage general election in May, activists and social movements used the 36th anniversary of the historic People’s Power Revolution as an opportunity to say “Never Again.” Hundreds congregated at Quezon City near the national capital to commemorate the anniversary of the EDSA 1 revolution on February 25.

The 1986 protests, which began on February 22 and culminated on February 25 were the result of mass upheavals, including by student movements, trade union groups and progressive and pro-democratic movements. It eventually brought down the autocratic and militaristic government of former president Ferdinand Marcos. The fall of Marcos was marked by a new era of democratization in Filipino political culture.

Demonstrators gathered at the People Power Monument in Quezon City, near the Epifanio de los Santos Avenue or EDSA, which was the epicenter of the 1986 protests. Left-wing and progressive movements and leaders were present at the demonstration, including Neri Colmenares, a progressive senatorial candidate, and Renato Reyes, leader of the left-wing Bayan party, along with opponents of the Duterte administration.

In the coming elections, Marcos’ son Ferdinand Marcos Jr, known as Bongbong Marcos, will be contesting for the post of president, which follows the controversial administration of Rodrigo Duterte.

His running mate Sara Duterte is the current president’s daughter known for a right-wing and iron-fisted style of functioning during her tenure as mayor of Davao City. The two are currently leading by significant margins in all major polls.

Progressive movements in the Philippines fear a continuation of the legacy of what are arguably two of the bloodiest and controversial presidencies in recent memory under the joint Marcos Jr.-Sara Duterte government.

Marcos Jr. was an active part of the Marcos regime, along with others in the family like his mother Imelda Marcos, at least since the late-70s. He was raised to the position of vice-governor in 1980 of the Ilocos Norte province, and later was elected unopposed as governor in 1983 and remained in the position until the revolution

During the last years of the Marcos regime, the ruling family was estimated to have amassed upwards of USD 5 billion at the very least, with Marcos Jr. himself having been convicted by the Quezon City Regional Trial Court of tax evasion during his time as governor.

Apart from the past allegations of corruption, the 14-year-long dictatorship was also marked by widespread human rights violations and political repression, with rights groups documenting at least 3,257 extrajudicial killings and 77 forced disappearances of activists and opposition groups, along with more than 35,000 instances of torture and over 70,000 political imprisonments.

Similarly, the Duterte government has been accused of gross human rights violations and attacks on civil liberties. According to estimates by rights groups, the death toll of his ‘war’ on drugs and anti-insurgency campaigns is anywhere between 5,000 and 20,000 people across the Philippines, including over 400 social activists and organizers killed in police raids or by right-wing vigilantes.

Calls were being made to block this bid to the presidency. Groups like Campaign Against the Return of the Marcoses and Martial Law (CARMMA), a coalition of victims of Marcos-era martial law regime and their families, and Kapatid, which work for political prisoners in the Philippines, have also reiterated their calls to voters to reject the Marcos-Duterte administration.

In their call to intensify the struggle to defend democracy, CARMMA asked “all Filipinos to block the return of the corrupt and tyrannical Marcos rule. Let us expose and oppose the continuing distortion of our nation’s history. This must not be the last EDSA People Power Uprising that our nation commemorates.”

The calls for the anniversary to not be the last EDSA was also echoed by Bayan leader Renato Reyes. “EDSA is the people. Even if there is no longer any official celebration, we won’t allow a collective amnesia to happen,” he said. Reyes’ words especially target attempts at historical revision and whitewashing by the campaign of Marcos Jr, and concerns that official commemoration of the revolution would be stopped under his presidency.