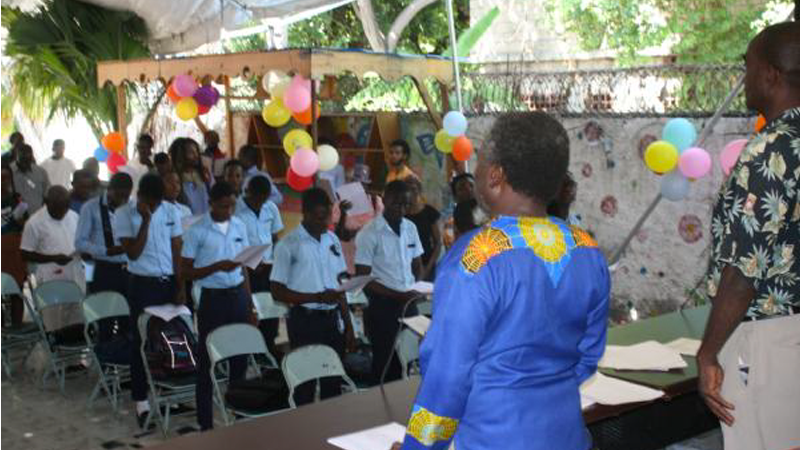 In Haiti, classes are sometimes taught in churches, in homes and even outdoors, so it is essential to improve these socio-political factors to have an educational system that can meet the needs of the country.

On March 16, the Union of Haitian Teacher Educators (UNNOH) held an event in the auditorium of Radio Kiskeya to celebrate the union’s 31st anniversary. Union leaders began the day of commemorations by singing the Haitian national anthem and The Internationale, followed by opening speeches. The union began the debate with teacher and general coordinator Josué Mérilien, who commented on the mission of UNNOH to build quality education in Haitian schools. Above all, UNNOH is struggling for universal quality education, accessible to all children and adolescents without any distinction or inequality.

Mérilien also described the accumulated political history of the UNNOH as a space of resistance to force the Haitian state to fulfill its responsibility of ensuring education for life, an education that is affordable to citizens regardless of their condition, origin, gender or belief. However, Mérilien also outlined the great difficulties and obstacles UNNOH faces in mediating with a government which criminalizes, persecutes and divides unions. In turn, Mérilien presented an overview of the struggles led by the Haitian teachers’ unions, particularly the UNNOH, in fighting for access to health insurance among other legal benefits, despite dealing with an uncertain and non-functional state. Mérilien also pointed out that one of the main areas of struggle for teachers is and has been the demand that the government build more public schools.

Several other prominent figures were present at the anniversary celebration. The Minister of National Education, Nesmy Manigat, as well as various other trade unionists, teachers and activists, were present. Two more panels discussed the balance of 31 years of struggle for quality public education and the improvement of working conditions of teachers.

Professor Camille Chalmers closed the event. He spoke about the colonial school model that still exists in Haiti, such as the several thousand Haitians who are educated in Dominican schools that promote anti-Haitian, racist and xenophobic ideology. The professor encouraged teachers’ unions to continue fighting, not only to change the colonial structure of Haitian schools, but also to change the government which acts against the well-being of the Haitian people.

Challenges and opportunities in the Haitian educational system

The Haitian educational system is divided into two large sections: public and non-public. Non-public establishments include private, denominational, and community schools, among others. The proliferation of schools that do not respect the operating rules of the Ministry of Education has hampered the work of teachers who, since the end of the last century, have struggled to offer Haitian youth a comprehensive education.

In addition to a high rate of illiteracy, there is a glaring disparity between the schools that cater to the children of the elites and those that cater to working class youth. Unlike the former, the latter are generally housed in buildings that do not have the necessary infrastructure to guarantee full educational development. Thus, in some regions, classes are taught in churches, in homes and even outdoors. It is essential to improve these conditions for working class students, in order to have an educational system that can meet the needs of the country.

Social, political, environmental and economic instability affects students on a daily basis. In times of political unrest, younger children are left at home, unable to attend school. Yet even in periods of calm, students are unable to participate in activities outside of school hours. The situation is the same for higher education students, who not only have difficulty accessing classrooms, but also find it impossible to go to research centers and libraries. Consequently, the duration of training is reduced, the duration of the course in general is lengthened, and some projects, including study tours, are put on hold until further notice.

Haitian organizations argue that precisely because it is a country with various social, political, and environmental crises, education should be the priority for the Haitian state. They maintain that the relevant authorities must provide the Ministry of Education with the human and material resources essential for its operation.