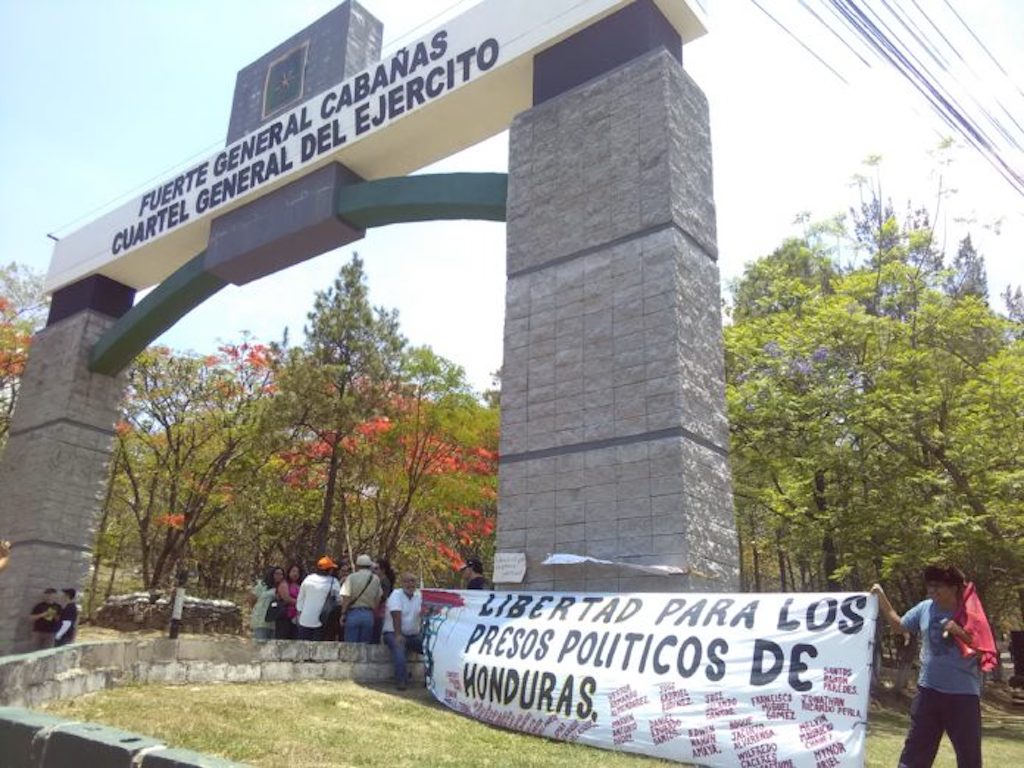 The recent uplifting news that 11 of the 21 political prisoners in Honduras would be released on bail and allowed to contest their charges in freedom has brought joy to their comrades but also brought into sharp focus the situation of the 10 who remain locked up in penitentiary facilities on false charges. Among the 10 are Edwin Espinal, whose bail hearing was held on May 9 inside a military base in his absence. His bail request, as well as all offers and motions presented by his defense attorneys, were rejected. Despite this continued persecution, Honduran social movements and human rights organizations continue to struggle against the continuation of the dictatorship and electoral fraud, and demand liberty for their political prisoners.

Espinal was arrested on January 19, a week before the inauguration of President Juan Orlando Hernández, and on the eve of a week-long national strike. He is being charged with arson, property damage, and the use of homemade explosive material. He is also under state investigation for terrorism and criminal association related to damage to the Marriott Hotel, a multi-billion dollar US chain, during a January 12 protest in Tegucigalpa.

Edwin’s case has been highlighted as an emblematic case of prolonged persecution through the nearly 10 years since the coup d’etat in 2009, which led to the ousting of President Manuel Zelaya. Through this period,  Edwin stood out for his work as a human rights activist in Honduras, and due to that, was a constant target of persecution by the Honduran state. In fact, activists have denounced the violation of his right to due process and a fair trial given that Claudio Aguilar, the judge who is hearing his case, also ordered a raid on Espinal’s home in 2013.

Bertha Olivia, the coordinator of Committee of Relatives of the Disappeared in Honduras (COFADEH), the organization in charge of Espinal’s defense, responded to the denial of bail by saying,  “Knowing who was presiding over the trial, the resolution was always going to be this one. We could not have expected anything else. Yesterday, I told them, my heart says that he will be freed, but my brain says that he will not leave, due to who is on the case.”

Despite constant petitions, the Honduran Penitentiary authorities have not allowed Olivia to see Espinal in the supermax La Tolva prison.

During the trial, a large gathering of friends, family and comrades waited anxiously for Edwin’s release and to embrace him after the 121 days that he has been isolated and mistreated, all under false charges. They were denied entrance to the military base and even Espinal’s family was not allowed to see him.

Earlier, on May 9, there was a moment of joy as 10 political prisoners, who were accused of setting a police station on fire in the northeast of the country during protests against the electoral fraud in December, received bail. However, human rights defenders warned that they were not fully free as they remain implicated in a complicated legal process with a rigged justice system ranged against them.

On May 10, activists and advocates across the world participated in a global action to demand the immediate freedom of the political prisoners. They stated that they would continue raising their voice and spreading awareness about the situation until all the prisoners have all been freed.

From La Tolva supermax prison, Edwin Espinal sent a message: “Knowing of your solidarity gives me hope. My struggle is not just about my personal case, but about all the rest of the political prisoners and the situation in my country. Thanks for your solidarity!”