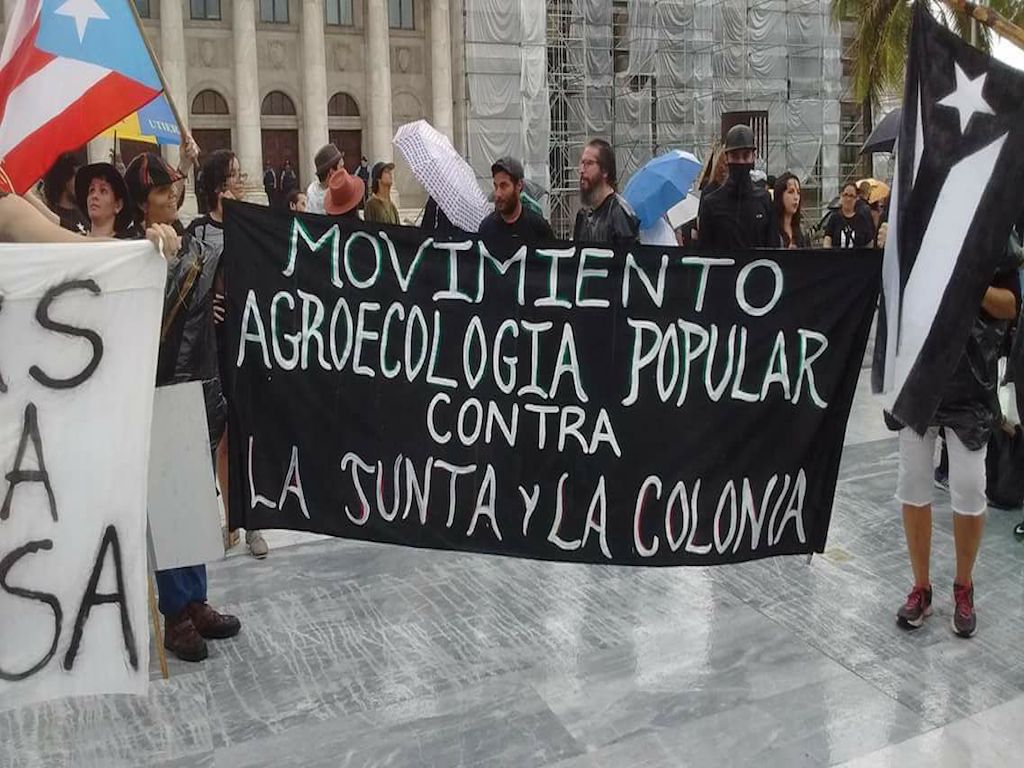 Banner reads: People's Agroecology Movement Against the Board and the Colony. Photo Credit: Movimiento Agroecología Popular

Peoples Dispatch spoke to Jesef Reyes Morales, who is part of the Movimiento de Agroecología Popular (Movement for People’s Agroecology) in Utuado, Puerto Rico, about the importance of agroecology in the island and the impact of US colonialism and Hurricane Maria on the people there.

Peoples Dispatch: What is the Movimiento de Agroecología Popular?

Jesef Reyes Morales: The movement is composed of different collectives that carry out regional work in the island. Collectives of agroecological agriculture, community processes, educational work, artistic initiatives – all these have been brought together under the Movimiento de Agroecología Popular. It was founded about five years ago and is quite a young movement. Our objective, in addition to taking forward initiatives for agroecological production, is to help in the process of the empowerment of our peasantry. They are a sector of society where we can see a lot of cultural resistance but it is still dispersed in other aspects. So currently, it is not a politically organized sector of society but it should be.

We see agroecology as resistance in our territories with respect to our seeds and our culture. It is not only about growing in an ecological way like “oh I have my agroecological farm, I am vegetarian; so I’m happy.” It is instead for our community. It is a collective process to free ourselves.

PD: What was the impact Hurricane Maria had on agroecological initiatives and agriculture on the island in general?

JRM: All agriculture, whether agroecological or conventional, was deeply affected due to the devastating hurricane that destroyed the forests, vegetation and rivers. It even destroyed bridges that linked communities. So as you can imagine, most farms were destroyed. Not even a year has passed and we are entering the hurricane season again and we are still in the process of rebuilding everything.

One positive development in the aftermath of the hurricane was that we were able to create more links within communities, since many were in such vulnerable situations that they were open to sharing and joining these processes as they were able to see the inefficiency of the state. After the hurricane, the state assistance was little to none. So the solidarity between people was all they had to rely on. For example, many farm owners had paid insurance and assumed that this would cover their losses. But most of them are yet to be compensated and many have lost their motivation to continue. After losing everything, how does someone start a coffee farm from scratch? It has been tough for many, but it has allowed us to re-build with people from below, without reliance on these institutions.

PD: What is the situation of food sovereignty in Puerto Rico?

JRM: The commonly cited statistic is that we produce 15% of our food while the other 85% is imported, whether it be from the United States, Central American countries like Costa Rica. But even this is often from US companies that are located in tropical countries. However, we believe that the actual amount produced is not 15% but 30%. The remaining 15% is not brought to the market but is consumed within families or is sold in places other than big supermarkets. And then a lot is lost because small agriculturalists sometimes have great difficulty in bringing their product to the market. Retailers – whether they be supermarkets or those who sell the products on the street or from trucks – often buy the produce for a much lesser price than what the agriculturist seeks. But the latter often end up selling their produce anyway because they are desperate to dispose it of. Also, a lot of produce does not get sold and goes bad.

Before the department of agriculture existed, it was said that in Puerto Rico, 65% of what was consumed was produced on the island. Although it was not a highly commercialized eco-system, there was still considerable local consumption. Most peasants had small plots of land and used methods of cutivation passed on over generations. You can still see some of these techniques. But the department of agriculture arrived and basically imposed more agroeconomical methods. For instance, agriculturists were asked to grow plaintains exclusively as that is what sells and were also asked to use a certain type of fertlilizer. So there was a process of de-peasantization in the mid 1970s, and many people left the countryside.

PD: We know that the current crisis in Puerto Rico is not only due to the hurricane. In fact, its status as a colony of the United States also plays a big role. What is the proposal from people’s agroecology to confront these factors?

JRM: Yes we are a colony of the United States, and right now we have a debt crisis, for which there is a Fiscal Control Board that forces us to pay this debt through all possible methods. These include cutting the education and health budgets, exploiting our natural resources, and privatization in various areas. However, we are also putting up a resistance, alongside other sectors like the teachers. They key thing is to make people understand that it is not an isolated struggle of the agriculturalists. Rather, these are issues that afffect all of us and the resistance is from all over too – from the countryside to the city. So we participate in the demonstrations, besides working on more self-managed farms so as to not depend on the state. Some believe that maybe, you can do this with loans from the state agencies or United States Department of Agriculture, but we try to depend as little as possible on these agencies because they are the same ones that have been and continue to destroy the food sovereignty of Puerto Rico. Thus, it is a contradiction to ask them to help us build our processes. So we have to have an autonomous process, a cooperative and collective process.