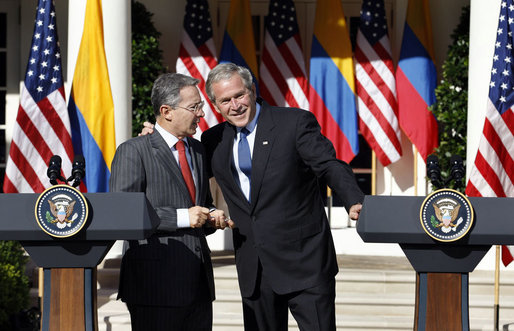 Alvaro Uribe's eight years as president were among the most violent in the country's history. Photo: Eric Draper/Wikipedia

On the afternoon of July 24, through a tweet, former Colombian president Álvaro Uribe announced his resignation as Senator, declaring that he was “morally unable” to continue his term in the Congress of the Republic. He stated that he did not want his legal defense in a case of influencing witnesses to interfere with his tasks in the Senate, though the official letter verifying this announcement has yet to be released. Many see his resignation as a calculated move so that his investigation is carried out by the Office of the Attorney General of Colombia instead of the Supreme Court of Justice.

Uribe is in the dock for a case involving the manipulation of witnesses in a hearing against Senator Iván Cepeda, a member of the Alternative Democratic Pole (a left-wing party in Colombia). Uribe had initially accused Cepeda of a conspiracy to link him to paramilitary groups. However, the Supreme Court dismissed the allegations and concluded that there was actually evidence of Uribe influencing witnesses instead. Before he announcing his resignation, Uribe had been summoned by the Supreme Court for an inquiry in this case – a sign that the legal process against him was progressing.

In Colombia, the Supreme Court has the power to judge the President of the Republic, as well as other high-ranking officials like members of Congress, while the Office of Attorney General of Colombia has the power to judge the citizens. Once Uribe is no longer a high-ranking public servant, his investigation would be handled by the Attorney General, a change that would significantly favor the ex-president.

However, Uribe still has to present his formal letter of resignation, which will then be presented to the Senate. The body will hold a debate on the issue and decide whether it will accept the resignation or not.

Much of Colombian society is indignant that a person accused of dozens of human rights violations, corruption scandals and diverse criminal activities is yet again trying to run away from the Colombian justice system. Uribe’s eight years as president (2002-10) were among the most violent in the country and saw the forced disappearance of around 32,000 people and the extra-judicial execution of thousands. He is involved in hundreds of cases, including of narco-trafficking, massacres and land disputes.

In June, Uribe’s protege won the presidential elections and will be sworn in August 7. His government is likely to comprise key figures in Uribe’s administration, who were involved in various rights violations.