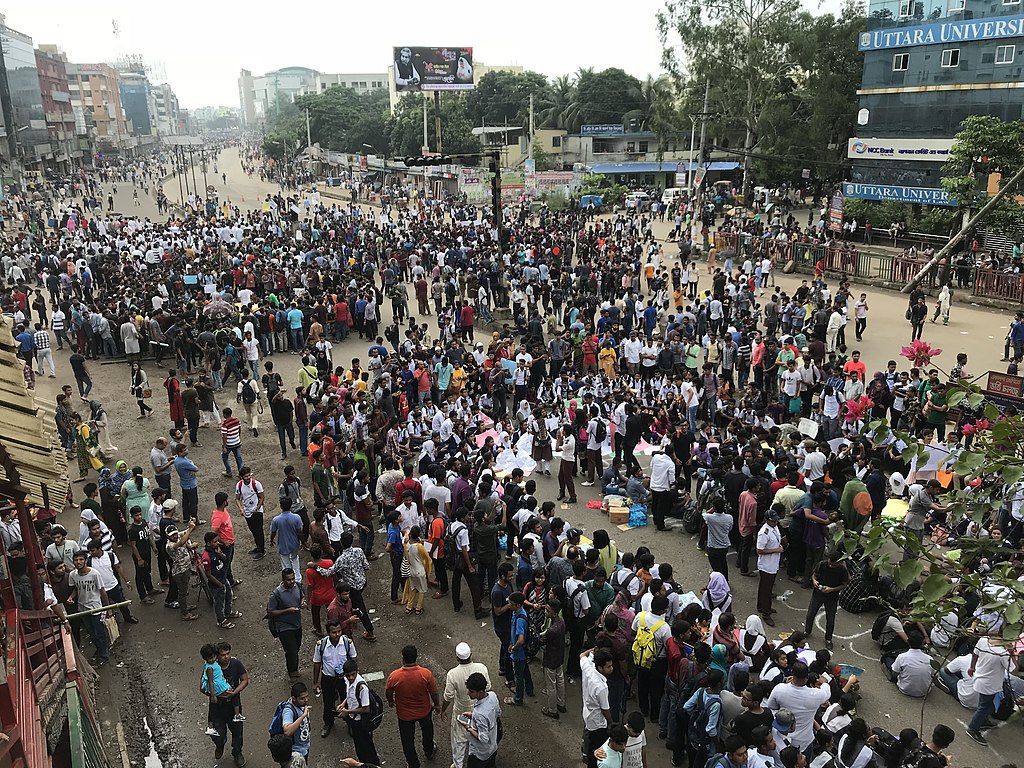 On July 29, two students, Abdul Karim and Dia Khanon Mim of Bangladesh’s Shaheed Ramiz Uddin Cantonment School, were run down by a private bus in the capital city Dhaka. In the aftermath of the incident, thousands of students, some of whom were as young as 13 years, took to streets, demanding the implementation of effective road safety mechanisms to end the increasing number of road accidents. Peoples Dispatch spoke to Nasir Uddin Prince of Bangladesh’s Socialist Students’ Front (SSF) about the protests.

Peoples Dispatch: Can you tell us more about the protests, its beginning and the demands?

Nasir Uddin Prince (NUP): There were frequent uprisings in Bangladesh in the recent times. And all of them were vigorously suppressed using police forces, atrocities by the student wing of the ruling party, and lastly, deception. As a consequence, the public had lost its trust in the government. And right at that moment, the school children were reported dead after they got hit by a bus. This news shook the whole country with rage. And this rage was intensified with the comment of Minister Shahjahan Khan about the accident in front of journalists. [When asked about the issue of death of two students, Khan responded by asking “A road crash has claimed 33 lives in India’s Maharashtra; but do they talk about it like the way we do?”]

The minister had been accused of creating chaos in the road transportation sector for many years but the government never paid any attention. Within a day of the accidents, protests by school and college students spread across the whole country spontaneously. They announced a 9-point charter of demands, including the dismissal of Shajahan Khan from the ministry and ensuring safe roads. The students managed to get tremendous support from the public.

A generation, which was assumed to be entirely consumed by video games and social media, and which was considered self-centered, ignorant about politics, the country and its people, turned out to be totally the opposite. Many incidents during these protests revealed this fact. After the liberation war, this is the first time children have rallied on the streets protesting the wrongdoings of the government. And on the days the streets were in their hands, they successfully proved that it was possible to stop all the chaos in the road transportation sector if the authorities showed the slightest amount of concern. For example, not only did they take up the job of the traffic police, they checked the licenses of each vehicle. Even ministers and the police, including and DIG [Deputy Inspector General] were not spared. This also exposed the corruption in the government organizations in Bangladesh. People were amazed at how beautifully those children controlled the traffic. They even managed to maintain an emergency lane on the streets which had not been seen in years. But instead of taking their demands into consideration, the government retaliated with violence as it has done on other occasions.

First, they tried to turn the transportation workers against the students. Then, they used the police force. But it only got worse. This was followed by attempts to launch attacks with their student wing, the Bangladesh Chhatra League, and the youth wing, Bangladesh Zuba League, and the labour wing, Bangladesh Shramik League, alongside the police. The students were assaulted with rods, sticks and even bullets at several places in Dhaka. And still, the movement did not stop. In the meantime, the internet connectivity was slowed down in the whole city so that the brutality on the students won’t go viral on Facebook. Then they somehow managed to create a media blackout inside Dhaka. People say that the country never got to know what was happening in its capital.

People are growing restless of the brutality of these organizations. Now, the police are checking people’s mailboxes and arresting anyone they like on the streets. The city of Dhaka is holding its breath. But this is not over. People are outraged beyond imagination. The spark of protest will explode once again

PD: The police have responded with tear gas, rubber bullets and water cannons. Many students were injured. Can you speak a bit more about the police and the government response to the protests?

NUP: Like it did with every other movement before, the government tried to label this protest too as an “anti-government conspiracy”, accusing the agents of BNP-Jamat (the current opposition parties of Bangladesh) of being involved. Even though masked men and men with helmets (members of wings of the ruling party) were seen everywhere unleashing brutal attacks on the protesters using rods, bricks and guns, alongside the police, the government does not seem to be too worried about bringing them into book. Instead, the protesters and civilians are being harassed everywhere now.

PD: The police have also arrested senior photojournalist Shahidul Alam, as well as many students. How do you see this move by the government?

PD: Are other sections of society, besides students and political parties who are also getting involved in the protests?

NUP: In addition to the students, their guardians, and a portion of school and university teachers, cultural activists, media activists, and people from various occupations are involved in this movement. The Progressive Students’ Alliance (Left-leaning students’ alliance) is protesting, as is the Left Democratic Alliance, a recently formed left-leaning political alternative consisting of 8 Leftist parties. As some of their colleagues were beaten very badly by the men with helmets, journalists have also joined this movement, demanding justice.

NUP: The government has done very little to ensure road safety. Everything is almost the   same as it was before. There is still no sign of the demands of the protesters being met although that had been promised. The bus company whose vehicle hit the two children (Jabal-E-Noor) is still running services on the roads of Dhaka. The only initiatives the government cared to take were to neutralize the rage of the students. In the meantime, they passed the very non-democratic and dangerous Road Transport Bill. The main reasons for bus accidents in Dhaka is that there are no fixed work hours or wages for the drivers and laborers. Thus, the more trips they complete, the more money they get. They are not trained properly at all and there is little government initiative to ensure proper training. Most of the buses are not fit for the road. They is no system of proper appointment cards. So when an accident takes place, they just dismiss the driver and their duty is done. The driver then goes on to another company, easily avoiding detection. Bus accidents can be avoided if the government takes these facts into consideration.

PD: Were there any other demands that were also raised during the protests?

NUP: This movement was spontaneous, with no visible leadership. So it is hard to find out which demand is coming from where. But in the aftermath of the relentless and brutal attacks on school, college and university students, people have demanded that the Home Minister apologize for not being able to protect the students.

The movement is also against the disparity in the execution of the law. The road massacre is a key aspect but we must also see that the government is taking various measures which are against people’s interest. A key slogan of the students is ‘We are reforming the country, sorry for temporary disturbance’. This slogan symbolizes the spirit of the movement. They want change, reform and a country where everyone enjoys equal rights.

PD:  What is the future course of actions planned by the students?

NUP: As mentioned earlier, this movement is being brutally repressed just like the quota reformation movement about a month ago. However, the suppressed rage among the people is only increasing. Recently, the government filed 35 cases in different police stations of Dhaka. They have taken 22 students into custody. They are creating an environment of fear all over the country. So the number of spontaneous gatherings is coming down but we are trying to ensure the spirit stays high. We are organizing different programs demanding the bail of the students and seeking justice for the brutal attack. In the future, sparks of protest will soon engulf the whole country once again because tolerance of the people has reached its limit.