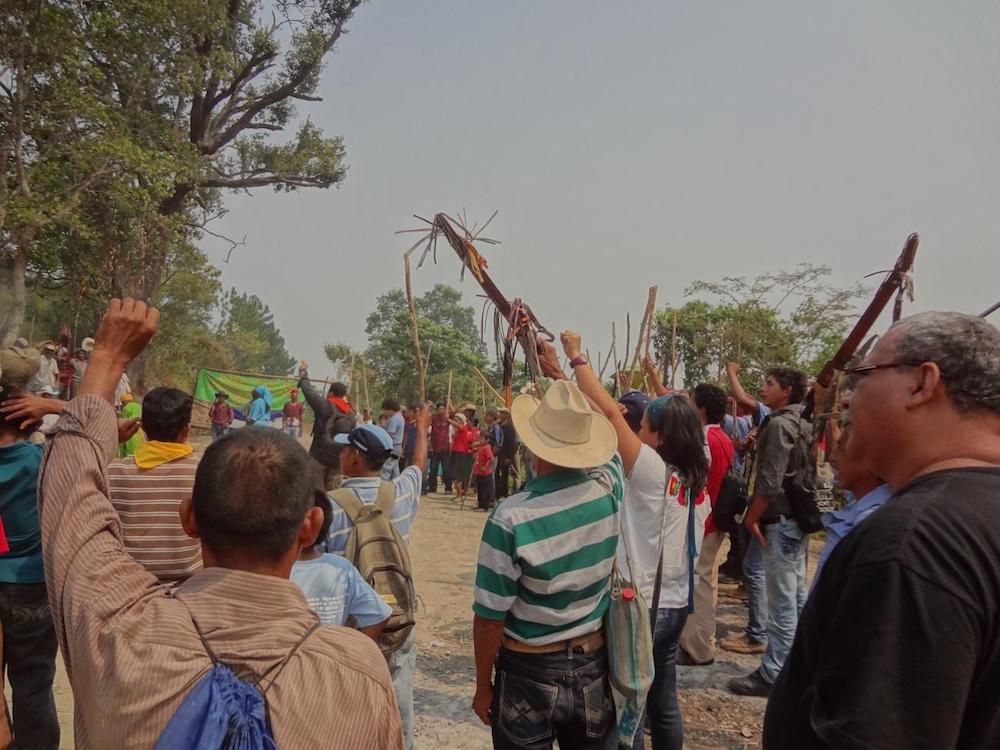 Community of Río Blanco in 2013 resisting the Agua Zarca project.

In March 2016, Berta Cáceres, a social leader heading the Civic Council of Popular and Indigenous Organizations of Honduras (COPINH), and a key figure in the resistance against the Agua Zarca hydroelectric dam project on the Gualcarque river, was assassinated. While the immediate suspects have been identified, the true culprits, as identified by the  International Advisory Group of Experts (GAIPE)  and other agencies, are the management of DESA, the company that was executing the project, and members of the Honduran government.

In the aftermath of Berta’s assassination, international pressure and the tremendous efforts by COPINH, along with the community of Río Blanco, forced the principle banks financing the project to withdraw their investment, and the project was temporarily suspended.

In recent times, there have been reports that the project on the Gualcarque, which is sacred to the Lenca community has been shelved. However, DESA and the Honduran government have not abandoned their plans to resume the project. They also covertly continue to try to discredit COPINH’s struggle in an attempt to create a situation to reactivate the project. To learn more about the current state of the Agua Zarca project, the resistance to it and the situation in the region, Peoples Dispatch spoke to Franciso ‘Chico’ Sánchez of the Río Blanco community, who is the president of the Indigenous Council and the coordinator of Land and Territories of COPINH.

Peoples Dispatch: Why does the community of Río Blanco fight against the Agua Zarca Project?

Francisco Sánchez: The most intense part of the struggle in Río Blanco began in 2013. We fiught to defend the Gualcarque river, the territory and the forest, because the forest and the river give us life. We were not (and still are not) in favor of the Agua Zarca project and in fact had on several occasions refused to accept it. We know that they asked the Congress, the deputies and the mayor for support but they never conducted a consultation with us  (in 1995, Honduras ratified Convention 169 of the ILO about free, prior and informed consultation to indigenous communities). We have been very clear from the very beginning that we don’t want dams in our territories. The Lenca people are today struggling to defend our common resources.

We know that it is very probable that the project might be resumed as the government has given permission. Unlike what they claim, this is not a project that will promote development for the community. Rather, it is a project of death. What they have done is provide security to the company while refusing to recognize us, the indigenous people. They want to evict us from the land; they have deployed soldiers in our territory to remove us by force. The Río Blanco community is vigilant because even though the project has been suspended, we know they are looking desperately for a way to start work again. So, we have organized with COPINH – so that we can defend what is ours.

PD: How did DESA arrive in the territory? What impact did it have on the community?

FS: At the beginning we didn’t realize the extent of the company’s plans because all we saw were different people passing by on the main road and taking measurements. This was in 2005 and 2006. We realized it was DESA in 2011 when they brought in heavy machinery, including tractors. We began to protest, saying that we did not want a dam. From this moment, the police and soldiers were deployed regularly and the company started to pay hitmen from the area, as well as paying off some of the people in the community.

All of this began to generate disagreement within the community. We used to get along very well but today, you can see great differences. The division is evident. For example, there are even divisions within families and in many cases, friendships and relationships have been damaged. So for the communities, it is not a project of development, but one of dividing our community and families. Before the project came, we lived very peacefully but since the company came, we are living without this brotherhood.

The arrival of the dam also meant the arrival of the soldiers. On the first day of April 2013, when we took the street and did not allow them to pass with the machinery, the police and the soldiers arrived and they threatened us saying that they were going to force us out. They threw out our food and threatened us. But they could never break our blockade. We resisted and were able to force the Chinese company Sinohydro to withdraw from the project.

PD: How was the resistance to the project organized?

FS: What we did was call Berta so that she would accompany us in the struggle; that was a huge achievement for us because if we aren’t organized, we don’t have the ability to demand anything. If we did not organize ourselves with COPINH, we would have been taken out of the territory or put in prison. But Berta and everyone who is part of COPINH were with us, and everything we have gained today is thanks to that. Although the suspension of the project is not permanent,  we still recognize that it is a great accomplishment. We will continue this resistance and we will struggle until we achieve our objective which is that the river flows freely.

PD: Although the project has been temporarily suspended, the repression has not. Can you comment on the situation of repression today in Río Blanco?

FS: Although there are not as many soldiers as there were before, the security guards are always present and we keep seeing the Madrid family harassing people. They burn our crops, steal the corn, mess with our cows and threaten people with guns. I have personally witnessed entire families being threatened with guns. This is often done by families that are supporting the company against us. The people of Río Blanco feel scared and they are told that hitmen will be hired to murder them so as to get them off the land.

PD: How will you continue in this process of struggle, knowing that in any moment the project could be reactivated?

FS: If they return, we are ready and we will resume the struggle and resistance. When I told the people that the dam project might return, their immediate response was ‘yes, we will also return to active resistance’. This is what motivates us because we know that the struggle is not a matter of a day or days but a long one. We must always struggle and be ready to defend what is ours. We also recognize the amazing work done by Berta and I tell people that we must continue always because she struggled and gave everything, even her life. She stood up to those banks, the ones we were in the end able to force to withdraw from the project. COPINH is struggling intensely so we will give what we have. We are now trying to get the Central American Bank to withdraw their funds from the project. I think we can achieve this and we will struggle until the end, as long as God keeps us alive.

PD: How do you feel that the struggle of Río Blanco has contributed something to those of people across the globe?

FS: We have realized that Río Blanco is very well known because I have been in different countries and they have recognized our struggle. This makes us feel great and gives us more conviction and strength because we know that if we had allowed them to build the dam, they would have continued with the nearly 69 other projects they had planned for. In other countries, they have cited Río Blanco as a model and an inspiration and I feel very proud and happy because the struggle has not been easy. We have lost several comrades but we continue to struggle for what is ours. Now, the government wants to get rid of the ILO Convention 169 on the prior consultation with indigenous communities. We will also fight against this too so that our territory and our rights are respected.