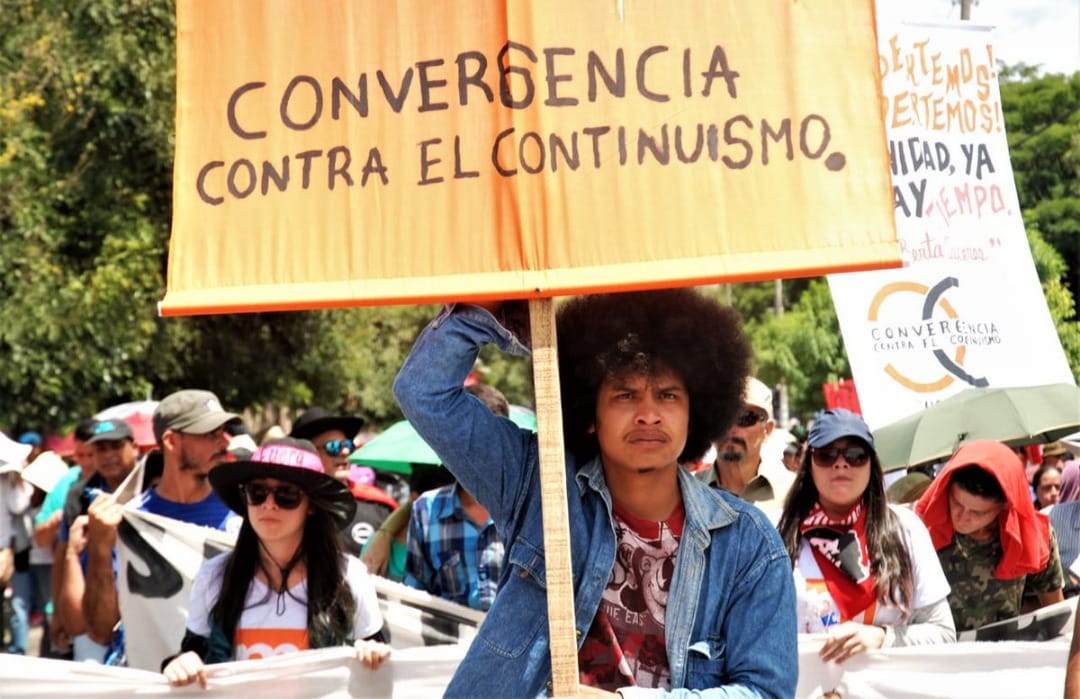 The Convergence Against Continuism (CCC), which brings together various regional organizations, social movements, grassroots organizations and citizens, mobilized on August 30 in commemoration of the National Day of Disappeared Prisoners. The mobilization was in rejection of the “current dictatorship led by the most corrupt mafia that Honduran history has known,” according to the manifesto released at the end of the day.

The organizations under the banner of the CCC mobilized to carry on the fight against the continuity of the neoliberal model- the “extreme expression of the capitalist system that in our country has been driven by a dictatorial regime led by a tripartite alliance formed by the oligarchic elite, political bureaucracy and transnational corporations, with the direct intervention of the U.S. government, the support of armed forces and structures of organized crime, which increases the lack of justice and truth.”

As explained by the CCC, this model has led to more impoverishment, misery, marginality and unemployment, systematic violation of human rights, violence, crime and insecurity. This is particularly evident in the alarming murder of women, privatization of public goods and services, forced displacement of communities, peasants, indigenous people, women and children, the concessions of rivers and territories to transnational and national private entrepreneurs, forced migration, curtailment of labor, economic and cultural rights, higher taxes, greater concentration of wealth and income. The State, instead of serving the people, is at the service of corruption and impunity.

The CCC, a non-partisan, social and political platform, called for a fight against the continuity of this model and against the fraudulent re-election of Juan Orlando Hernández. His re-election was fundamentally unconstitutional, and in addition to making the entire electoral process fraudulent, it destroyed the already weakened institutionalism of the state, whose consequences the people are suffering, the manifesto noted.

The CCC said it firmly believed in public protest as an undeniable right and an expression of the conscious organization of the people. They had organized themselves to express the desire for the construction of a new constitutional order to establish the real rule of law and a new institutionalism, the statement added.

The CCC called for the struggle to recover the wounded homeland, to mobilize in response to the call of the martyrs, and in memory of Margarita Murillo and Berta Cáceres, to fight for:

During the reading of the manifesto, the CCC called on the indignant people, fed up with abuses and in resistance to the neoliberal model, to strengthen the unitary and national vision, without losing the dimension of the struggle for the construction of a sovereign Central American people’s project.

The CCC also called for a Great People’s Plebiscite to be held across the country, which brings together a diversity of voices, because “in the fight against neoliberal and dictatorial continuity, it is important to include all the voices and all the flags.”

The People’s Plebiscite will pose the following three questions:

The results of this people’s and national consultation will be announced in Tegucigalpa, before a people’s assembly, scheduled for November 26.

Lennys Fajardo wrote this article and is part of ALBA Movements in Honduras as well as the Convergence Against Continuism. Translation by Tanya Wadha