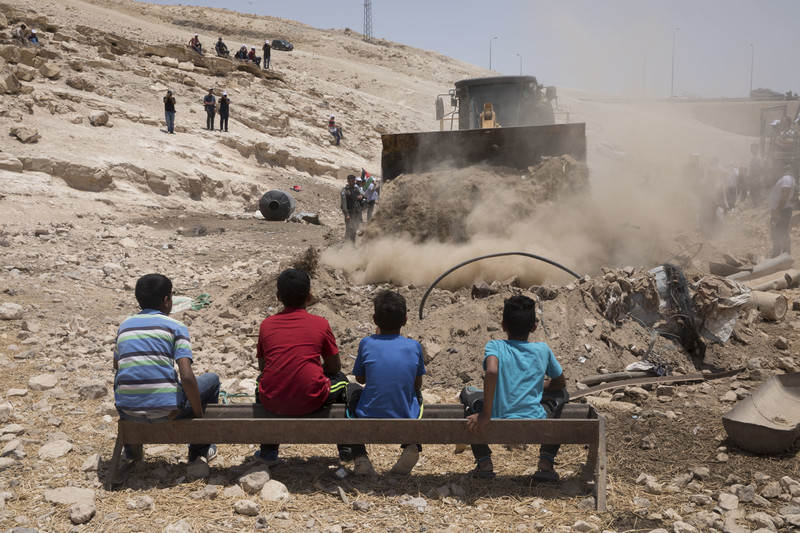 Israel last week issued notices to Palestinian Bedouin villagers in Khan al-Ahmar in the occupied West Bank, telling them to demolish their homes and vacate the area by October 1. If they do not do so, their homes will be demolished by Israeli forces and they will be forcibly  relocated.

The Supreme Court of Israel had earlier this month rejected an appeal against the planned demolition, also ruling that its stay on the demolition would expire in a week.

Khan al-Ahmar is located just a few kilometres from Jerusalem, between the illegal Israeli settlements of Maale Adumim and Kfar Adumim. Israel intends to expand these settlements after the demolition of the Bedouin village. Khan al-Ahmar is home to close to 200 Palestinians, most of whom live in makeshift tents and shacks, and eke out a living by raising sheep and goats.

The villagers belong to the Bedouin Jahalin tribe, which was expelled from their homes in the Naqab desert by Israel in the 1950s. They were displaced twice again in later years before eventually settling in Khan al-Ahmar. Nearly 60% of the West Bank is under complete Israeli administrative and security control. The demolition of the village will result in the West Bank being cut into two parts.

The Israeli decision to demolish the village, and the subsequent decision by the Supreme Court upholding it, have been roundly condemned by the International community. Eight EU (European Union) countries opposed the decision on Thursday. Belgium, France, Netherlands, Poland, Sweden, United Kingdom, Germany and Italy issued a joint statement condemning the planned demolition. A European Parliament (EP) delegation that had visited Khan al-Ahmar earlier warned that the Israeli decision could be considered as a war crime.

Neoklis Sylikiotis, chairman of the EP delegation, said, “the forceful transfer of people under occupation is a serious violation of the Fourth Geneva Convention and is considered a war crime. The delegation supports the Palestinian struggle for freedom and justice and for self-determination and opposes at the same time the Israeli occupation and apartheid.”

The court’s decision was based on the fact that the villagers hadn’t obtained prior construction permits from Israel. It thus deemed the structures on the village land, including a school funded by the Italian government, illegal. The office of the UN (United Nations) High Commissioner for Human Rights had urged Israel to abort the demolition plans, stating that the destruction of private property by an occupying power was a violation of international law.

Palestinians have also cited the extreme difficulties they face in trying to obtain construction permits from Israel. According to UN figures, only 1.5% of all permit requests by Palestinians between 2010-2014 were approved by Israel.

Israel plans to relocate the residents to a site near the village of Abu Dis, 12 km away, adjacent to a landfill site. The relocation plan has been criticised by Palestinians and EU states, who fear it could pose a danger to the health of the villagers, besides negatively impacting the Bedouin community and seriously harming the prospects of a two-state solution and a long-term peace plan.

[This article has been updated with new information]