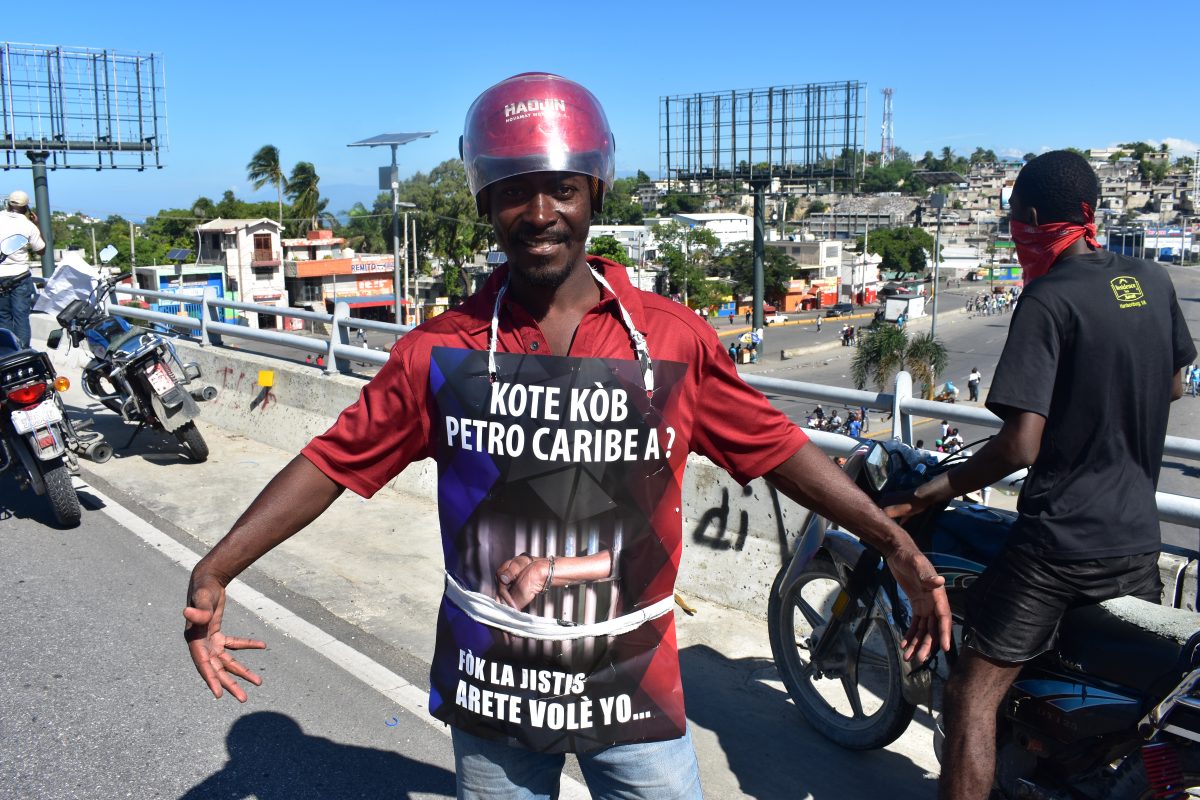 Since mid-morning, tens of thousands of protestors began mobilizing in caravans from urban peripheries to Champ de Mars, the political centre of Port-au-Prince where the National Palace and other government municipal buildings are located. Almost all major cities of the country such as Hinche, Cabo Haitiano, Jacmel, Les Cayes, St. Marc, etc. saw similar mobilizations.

The motivation behind the massive protests were tied to the denouncements of embezzlement of Petrocaribe funds, illegally appropriated by the present government of Jovenel Moïse and the previous governments of [René] Preval and [Michel] Martelly. Haitian civil society denounces the development of social infrastructures that were never completed and with exorbitant pricetags, and the diversion of funds towards private initiatives such as the construction of President Martelly’s private residence or of the Marriott Hotel.

There were about 3.8 billion dollars offered to the country through the energy integration platform promoted in 2005 by Hugo Chávez and sustained until today by the Bolivarian Revolution of Venezuela. Since it was started, Petrocaribe has offered oil to some 19 countries at low cost, with a 25-year financing term, a negligible interest of 1%, and the possibility of paying back for crude oil in the form of goods and services. In all these Caribbean nations, small and dependent on oil imports, Petrocaribe has financed more than 109 programs and social projects, building what Chávez called an “anti-crisis and anti-hunger shield”.

However, the endemic corruption of the local political class and the influence of the imperial forces, have facilitated the theft and squandering of millions of funds that were designed to confront impoverishment and inequality as well as the implementation of more than 30 years of neoliberal policies.

The peasant leader Chavannes Jean-Baptiste says that “it is necessary to make the Haitian people know the truth about the idea of Chavez and Fidel with Petrocaribe, which is a solidarity project to support several countries, and that their governments implement programs of social benefit; but what has happened in Haiti is that corrupt governments have stolen that money…”.

The mobilization was called for in the context of the commemoration of 212 years of the assassination of Jean-Jacques Dessalines, main leader of the Haitian Revolution and considered “Father of the Nation”. It should be understood as a continuation of the political crisis that started in July in response to the attempt to increase the price of fuels which was a demand of the International Monetary Fund. The complete discredit of the political class and of President Moïse has unified different sectors of Haitian civil society around the demand of his immediate resignation.

Camille Chalmers, renowned intellectual and Haitian social activist, said: “the events of July 6, 7, 8 have exacerbated internal conflicts within the sectors of the ruling class … The current crisis is the manifestation of the total failure of the institutional model (…) This model is exhausted and is falling apart. The July uprising reflects a total loss of legitimacy for the President, the government, the parliament and the judiciary.”

The massive demonstrations were repressed with sticks and gases in front of the National Palace, where young protesters were arrested. In addition, the death of at least one person has been reported in the locality of Les Cayes, capital of the Sud department, the same place where the action of parapolice groups was denounced.

A day prior, on October 16, the right-wing sectors began to incite intimidation, shootings in the periphery, and other strategies aimed at implanting a virtual state of siege, so as to demobilize the crowds expected to take to the streets of the country the next day.

Despite the repressive response of the security forces, the demonstrations continued throughout the country.