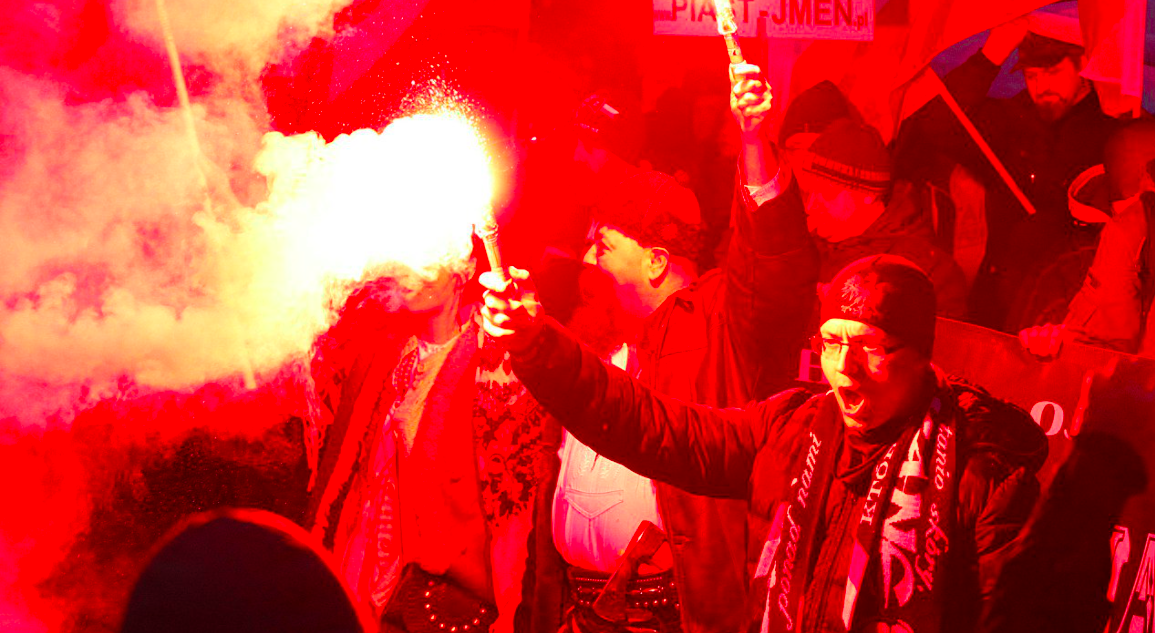 Different countries across the European Union are witnessing a disturbing rise in right-wing sentiment. This rise is on open display in the form of rallies and demonstrations seeing participation in significant numbers while making use of provocative symbols. These right-wing groups often celebrate historical events which were responsible for massacres and onslaught of human rights, such as the beginning of the Nazi regime. Concerted efforts by progressive, left-wing forces are being made to counter these fascist rallies with their own demonstrations.

In Poland, a massive nationalist rally held on November 10 overshadowed the 100th National Independence Day celebrations in the country. The major organisers of the rally include the far-right National Radical Camp (ONR), the National Movement (RN), and the All-Polish Youth (MW) who consider themselves as the ideological descendants of the anti-semitic political movement which existed before the World War II, with the same name. There were reported instances of provocative display of falanga (a far-right symbol) and xenophobic banners in the rally which read “White Europe of brotherly nations.” Most importantly, Polish President Andrzej Duda, in a shockingly unprecedented manner, spoke at the demonstration.

Even though Warsaw mayor banned the rally by the ultra-nationalists on Wednesday, but a court lifted the ban. Several anti-fascist, leftist groups also organised demonstrations in the city to counter this.

On November 9, in Berlin, ultra right-wing supporters held a rally on the 80th anniversary of Kristallnacht pogrom to mark when the Nazis began the attack on Jews in 1938. The call for the rally was given by an ultra right-wing outfit called “We are for Germany” (WfD). Even though Andreas Geisel, the Minister of Interior Affairs of Berlin from Social Democratic Party (SPD), had banned the rally, a Berlin court overturned this ban. Prior to the fascist rally, thousands of Berliners led an anti-fascist rally in order to counter the fascist manifestations on the date.

On November 3, a massive anti-fascist rally was held in the Italian city of Trieste in protest against the conduct of a pro-fascist rally organised by the ultra-nationalist CasaPound party in Trieste. CasaPound had organised the rally for celebrating “the centenary of Italian sacrifices in the World War I” with around 2,000 people participating. But at the same time, a countermarch organized by the Trieste anti-fascist and anti-racist network, reiterated that there is no room for fascism, racism, and sexism in the city. According to Riccardo Laterza, a representative of the Trieste anti-fascist and anti-racist network, more than 10,000 people participated in the anti-fascist rally including Italian and Slovenian cultural activists, trade unionists, feminist groups, LGBT rights groups etc. The Communist Party of Italy and Refoundation Party also expressed their solidarity and participated in the anti-fascist rally.

Since the announcement of both rallies, the city of Trieste experienced a tense time due to the probabilities of clashes between the two groups. Even though, both rallies were held simultaneously at relatively nearby streets, police managed to avert any serious confrontation between the groups.

The ethnic Slovenian community living in the north of Trieste, adjacent to Slovenian border, was alarmed about the pro-fascist rally and appealed to the authorities to safeguard the community in the wake of the recent surge of neo-fascist groups like CasaPound in Italy. CasaPound’s rally made its reverberations across Slovenia as major political parties in the country denounced it as an act of instigating hatred.

Slovenian Prime Minister Marjan Šarec tweeted about the CasaPound rally and said it is like “salt on the never healed wounds of the Primorska Slovenians in the heartland and the diaspora. Fascism has always been evil incarnate, but it may not be supported”, he added.

A Slovenian patriotic association called TIGR Primorske, in their press statement on October 31, had urged the Slovenian authorities to alert their Italian counterparts to take necessary actions to restrict CasaPound from conducting the rally.