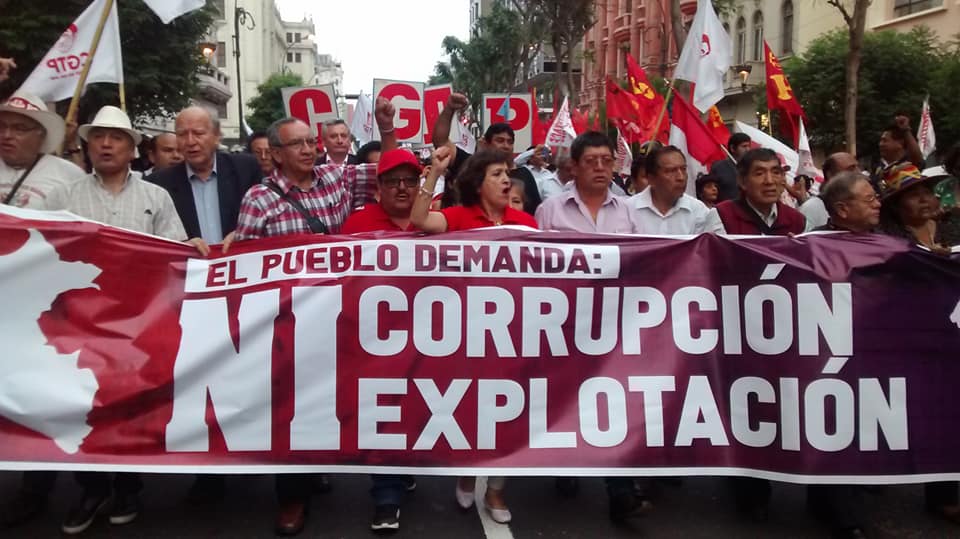 On January 15, more than 25,000 workers from different trade unions mobilized in Peru’s capital Lima and other major cities against the National Policy of Competitiveness and Productivity (PNCP), the labor reform recently approved by Peruvian President Martín Vizcarra. The protest was called for by the General Confederation of Peruvian Workers (CGTP) and the Unitary National Command of Struggle (CNUL).

In Lima, the protestors marched from Plaza Dos de Mayo to Plaza San Martin demanding the annulment of the PNCP. The cities of Tacna, Huánuco, Lambayeque, Loreto, Arequipa and Piura also saw huge protests against this anti-labor reform.

The mobilization in Lima was accompanied by a heavy police presence. Wayka, a Peruvian news portal, reported that the protesting workers met with violent police repression in late evening. In addition to the arrest of three people, one was severely injured and was admitted to a hospital. The police also used tear gas bombs to scatter the crowd.

On December 31, the government approved Decree No. 345-2018-EF or the PNCP without debating it in the National Labor Council. Labor and trade unions across Peru denounced that the new labor policy represents a set-back to labor rights and only favors the entrepreneurs. It seeks to implement a series of regressive measures such as temporary contracts without stability, collective dismissals without compensation, no to CTS and retirement payments and takes away the right to wage bargaining and strike.

“From here we tell Mr. Vizcarra that the workers and the Peruvian people have not given him a blank check to implement labor reforms that go against the workers. (…) It is an attack on the struggle that we have been carrying out for years”, said Gerónimo López, the general secretary of the CGTP.

January 15, the National Struggle Day, as the workers called it, coincided with the 100th anniversary of the achievement of an 8-hours workday in Peru. “Today, we celebrated one hundred years of the conquest of the eight-hour workday, a right won in the streets, and in the streets we will achieve the abolition of this decree that violates workers’ rights and only benefits the companies”, said López, highlighting the importance of the day.

The CGTP is also preparing to call for a national general strike in the coming months. “The CGTP calls a national assembly of delegates for February 15, there we will agree on the call for a more forceful, more massive and combative day”, announced López.

The workers were also joined by small vendors, retired and pensioners, members of several social organizations, students and feminist collectives and left-wing political parties like Red Fatherhood-the Communist Party of Peru and the Peruvian Communist Party.