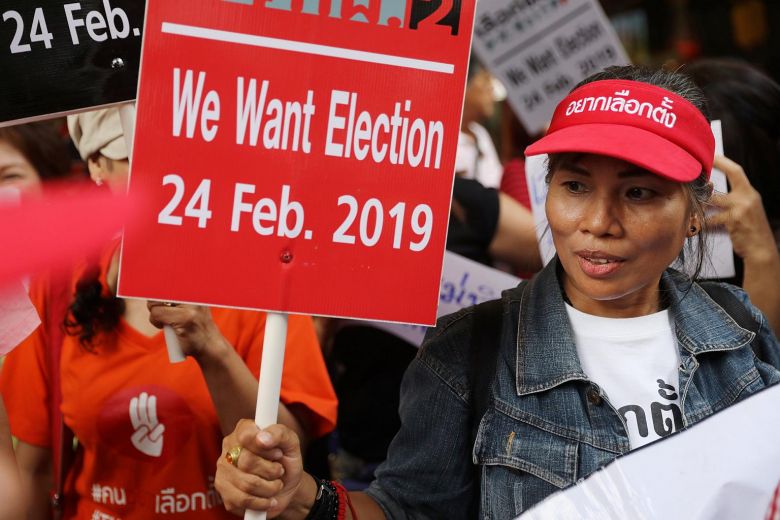 The latest round of protests ahead of the declaration of elections began on January 9 and steadily grew in intensity. Photo: Reuters

Thailand’s military junta government once again postponed the general election, scheduled for February 24, by a month despite a series of protests across the country. On January 23, an election commission spokesperson announced March 24 to be the final date of election and said that preparations would begin for the same. The announcement came soon after the monarch, king Vajiralongkorn, signed the motion to hold the election in March.

The postponement was proposed by the deputy prime minister, Wissanu Krea-ngam, on January 4. He argued that the scheduled date would clash with “preparation” for the coronation of Vajiralongkorn, which is to be held in May. This was the sixth postponement since 2015, the year when the said election was originally promised. This was also the fifth postponement since the adoption of the new constitution in 2017. The present government of prime minister Prayut Chan-o-cha is propped up by the military-controlled National Council for Peace and Order.

Observers have indicated that the junta government is biding its time as opinions polls continue to suggest that the Pheu Thai Party (PTP) is gaining. Thailand has been under military rule since 2014, when a coup d’etat unseated the PTP government led by Yingluck Shinawatra. The government has faced criticism and protests for constantly delaying elections and prolonging military rule. The recent set of protests came less than a year after another major round of agitations in April and May 2018 with the demand for the restoration of democracy.

Ever since the 2014 coup, people have organized either as part of the United Front for Democracy against Dictatorship, the Red Shirts or independently to fight for democratization and human rights in Thailand. But political organization is not easy under the present military junta. Speaking to Peoples Dispatch last year, Rome Ramsignam, of the Democracy Restoration Group (DRG), pointed out that the government had made it punishable to conduct campaigns, even if it involved educating people about their constitutionally guaranteed democratic rights. A similar punitive measure was taken by the coup government to criminalise any mobilization or even debate in the constitutional referendum of 2017. Even now, with the election date finalized, the government does not allow political parties to canvas for candidates or even launch their campaigns. It is in such repressive climate that people come out on to the streets, demanding that the elections be scheduled as decided.

On January 6, the first set of protests were held in the national capital, Bangkok, and a few other places across the country. Subsequent protests were organized on January 9, 13, 16, 19, and 21. The number of participants grew steadily with each protest. Social media was abuzz with hashtags such as #delaymyass. The intensity of these protests was not as much as the ones in the aftermath of the 2014 coup, which were met with extremely violent repression by the government. Routine demonstrations, organized in the context of a real possibility of violent repression, clearly did not deter the government from going ahead with the postponement. Nevertheless, the protesters were able to pressurize the government into giving assurances of officially finalizing March 24 as election day, unlike the flimsy promises made earlier.

A big reason behind the delay likely to be the decreasing popularity of the military government. The opinion polls have indicated that the PTP has consistently remained the most popular political party as opposed to the pro-military right-wing Phalang Pracharak Party (PPP) and royalist Democrat Party. An electoral victory for the PTP could be an obstacle to the military’s and the monarch’s attempts at controlling the government.

Between monarch, military and populists

Thailand has had a very tenuous history of democracy, which has co-existed with the monarchy. The 2014 coup was the nineteenth in Thailand since the 1933 coup that transitioned the nation from an absolutist monarchy to a constitutional one. In most of these coups, the monarchy often collaborated with the military to undermine a popularly elected government. While the royal family has certain popularity among the Thai people, royalist political formations have found it increasingly difficult to gain power through popular elections.

Thailand has some of the most draconian lèse-majesté laws, criminalizing even the slightest of criticism of the royal family. The lack of popularity of royalist parties also has to do with the royalty’s relationship with the military and its role in facilitating the latter’s manipulation and forcible dissolution of popular governments. Since the late 1990s, populist political groups like Thaksin Shinawatra’s Thai Rak Thai and later People’s Power Party, predecessors of the PTP, gained significant ground, winning a plurality of votes, and most seats in every popular election since 2001. The leaders of these populist groups were often charged with corruption and electoral malpractices, which in turn were used to the dissolve these groups by the constitutional courts. Despite such charges, popular support by and large remained with PTP and its predecessors, as there have been few alternatives to fall back on against the royalists and the militarists.

The constitution versus democratic will

After the 2014 coup d’etat and the formation of the Prayut government, the 2007 constitution was effectively suspended and the National Legislative Assembly (NLA), dominated by PTP, was abolished through a constitutional amendment under martial rule. The government later introduced a new draft constitution in March 2016 and called for a referendum on it. The referendum did not include any public debate or campaigns and the draft was directly put up for vote, on August 2016. The new constitution was ratified with several amendment in April 2017, and almost mirrors the 2008 constitution adopted by the junta in Myanmar, which is still in effect.

The constitution, while having reinstituted the bicameral NLA, changed the character in a manner that kept the military’s stranglehold on the civilian government intact. The bicameral parliament is supposed to have a senate where all the members are appointed by the military, with seats specifically reserved for its various organizational heads. The senate has the powers to approve and dissolve the government, making it impossible for any future popularly elected government to have any amount of power independent of direct military influence. This has been observed as a move to keep in check the rise of any populist governments, especially from the PTP, which despite being in bad terms with the government, is still allowed to operate in Thailand.

Now that popular election is set to take place in March, almost five years after the coup, it would be interesting to keep an eye out on the outcomes of the election and what follows afterwards. In the meanwhile, the recent protests have clearly demonstrated that the Thai people are not ready to give up on their aspirations for democracy.