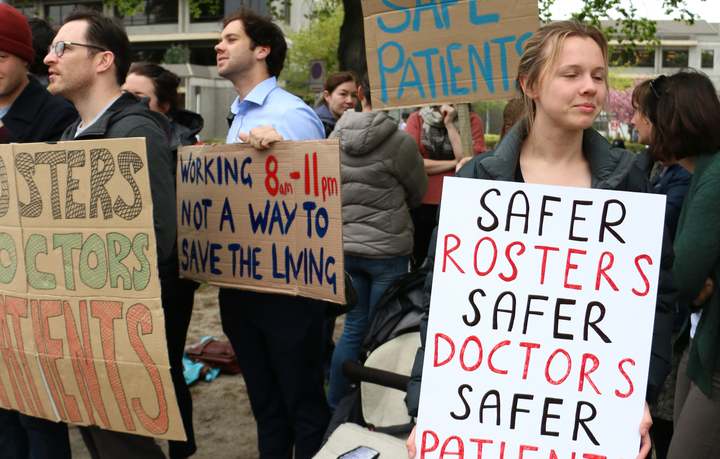 Between October 2016 and January 2017, doctors went on two major strikes, until district health boards agreed to involve unions in roster.

An estimated 3,300 doctors across New Zealand staged a two-day strike on January 28 and 29 to protest attempts by the District Health Boards (DHBs) to change employment contracts and bypass the union in the roster system. This was the second demonstration by resident doctors in January. The strike affected work in every major hospital, with hundreds of postponements of elective surgeries and consultation appointments. The New Zealand Resident Doctors’ Association (RDA) is at the forefront of organizing the strike. The RDA has also called for a strike on February 12 and 13, and threatened further protests throughout February if the DHBs change the status quo on work conditions.

The current matters of dispute have been the biggest sources of friction between hospital managements and junior resident doctors since 2016. Between October 2016 and January 2017, doctors went on two major strikes. The DHBs eventually blinked and accepted some of the main demands of the union by February 2017 that bettered the work conditions. The achievements of the strike included reduction of the number of consecutive night shifts and the hours of a standard ‘long day’, allowing the doctors enough time to recuperate before their next shift. Apart from that, the DHBs also agreed for hospitals to consult with the union, i.e., the RDA, to prepare and, if necessary, veto the doctor’s roster. The roster decides the arrangement of every doctor’s schedule and shift for their practice.

The DHBs now plan to bypass the union and consult directly with individual doctors. Many doctors criticized the plan as an attempt at “clawing back” the achievements that doctors fought for barely two years ago. “I remember what it was like when I was a house surgeon doing 12 days in a row and seven nights in a row and it was horrendous,” said Dr. Tessa Ramsden of Wellington Hospital to Radio New Zealand. Ramsden also indicated that the attempt to bypass the union would leave the doctors vulnerable to the dictates of the DHBs and the respective hospital managements that they represent. This sentiment is shared by other protesters as well. Many fear that even though the DHBs are not planning to change any of the working arrangements agreed upon in their contracts now, with the union eventually out of the way, they can alter the arrangements once the contracts are up for renewal. Another participant of the protest, Dr. Christina Vanderboor, told Stuff.co.nz that, “they’re waiting out the clock until our contracts expire. Striking is the only power we have at the moment”.

A negotiation attempt on January 24 did not yield any results. But doctors remain relentless in their struggle to keep their hard-fought achievements. Speaking to Stuff.co.nz, RDA representative for Waikato said, “We’re actually striking for the status quo”.