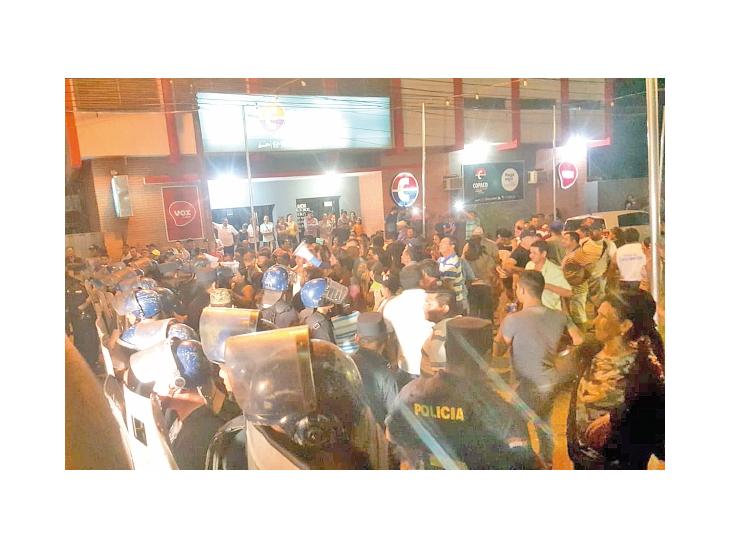 The protest of residents on February 5 was met with harsh repression by the police. Photo: Ultimahora

The citizens of Concepción, Paraguay, have been protesting for almost 4 months, demanding the resignation of mayor Alejandro Urbieta. The mayor is accused of corruption, lack of transparency, breach of the public information law, heavy debts to the pension fund and mismanagement of public resources. One of the major irregularities he is allegedly involved in is the fraudulent sale of municipal public space in Nanawa Port.

On February 5, the police attacked protesters with tear gas, rubber bullets, and fire hydrants, which resulted in injuries to several individuals. Police pursued young protesters and three were violently arrested, including a 17-year-old.

The first protest was held on October 15, 2018, at the Agustín Fernando de Pinedo plaza, from where protesters went to Urbieta’s house. They staged a demonstration, demanding his resignation and threw rotten eggs and toilet paper at the building. On October 24, another escrache [a type of demonstration which involves applying public pressure prominent persons, usually by congregating around their homes] was held outside the mayor’s residence. The police responded with harsh repressive measures. They fired tear gas bombs and rubber bullets, injuring 2 people.

Similar protests held in the following weeks were also attacked by the police. Another violent incident of police repression was recorded on November 2 during a demonstration outside Urbieta’s father residence. Senator Pedro Santacruz of the Democratic Progressive Party (PDP) who was a part of the mobilization, was wounded during the confrontation. Mario Ferreira, a demonstrator, was pushed to the ground, beaten by the police and apprehended. Several people were injured with rubber pellets during that protest. Attacks on the demonstrations also took place on November 12 and November 20.

On October 23, the protesters took their request to the Municipal Board at a public hearing and demanded state intervention. On November 15, after marching throughout the streets of the city during the day, at night, the protesters crowded outside the house of the municipal councilor Estrella Quevedo, demanding that she vote in favor of an order of intervention in the council. But the legislator has failed to respond to the demands.

A key issue the protesters have been flagging is the sale of the 6.2 hectares in Nanawa Port. They allege that the sale of the land to the Terminales y Logística Portuaria S.A. (TLP) for just 700,000 US dollars is a ‘gift’ to the company and that the land has a much higher value. Urbieta sold the plot without sharing the details of the agreement with the Municipal Board.

On the other hand, the city is in a terrible state, with dilapidated streets and poorly executed public works projects. There is a massive shortage of medicines in hospitals and residents have been complaining of lack meals in public schools. Meanwhile, many municipal employees have complained of receiving their salaries with delays of up to two months or in installments.

Currently, Urbieta is under  house arrest, charged with breach of trust and misappropriation. A former municipal officer complained against him and approached the judiciary after not being able to access his contributions from the pension fund, despite the fact that each month, the corresponding amount was deducted from the salary. When he went to withdraw his contribution, he was informed that the money had never been deposited in his name.

During a press conference on November 5, Urbieta said that he would appeal against the house arrest and compared and questioned his restrictive measures with other cases, in which the accused was investigated for much greater amounts while remaining at liberty.

For the people of Concepción though, this legal action is only the beginning in their fight against the systemic corruption and the other issues facing the city.