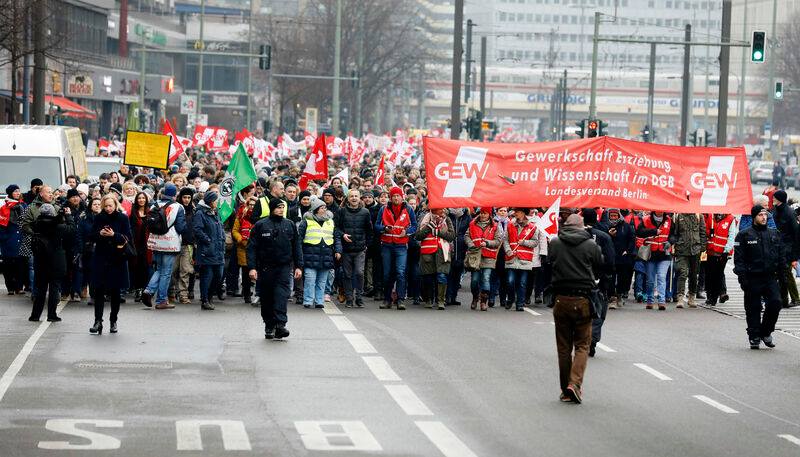 The next round of talks between the workers and the authorities will be held on February 28.

Public service employees and teachers in various German cities went on a massive warning strike on February 12 and 13, against the delay in agreements on their demand for a wage increase for about one million public service employees under TV-L. TV-L is the German public servant remuneration grade table, based on which civil servants in Germany are graded for their salaries and work conditions.

The strike was called by various trade unions, including the German Civil Service Federation (DBB), Verdi, General Education Union (GEW), Trade Union of the Police (GdP) and IG Bauen-Agrar-Umwelt (IG Bau) to protest the protracted nature of negotiations on the collective agreement of the federal States. The unions demand a 6% increase in their pay, which works out to a raise of at least 200 euros (USD 225.42) per month.

Employees held protest marches under the banner of DBB in Berlin, Leipzig, Hamburg and Stuttgart, among other cities. Earlier, in January, rallies demanding a comprehensive wage reform were held at different places.

The first round of negotiations between the unions and the employers, on January 21, and the second round at Potsdam, on February 6 and 7, ended without any success. The authorities announced that the third round would start from February 28 at Potsdam.

The DBB said the delay on the collective agreement is affecting around 3.3 million workers in the country, either directly or indirectly.

The GEW stressed that the educators and social pedagogues in Berlin needed to earn as much as their colleagues in other federal States. “This is especially a Berlin problem whose solution the Senate has been pushing for several years on the collective bargaining community of the countries. Half of the educators and social pedagogues in TV-L are employed in Berlin,” it said.