On March 3, sex worker groups across the world observed the International Sex Workers’ Rights Day (ISWRD). The day saw different groups organizing rallies and embarking on campaigns to strengthen the global struggle for recognition of sex workers and granting them workers’ rights.

The day was first celebrated in 2001, when over 25,000 sex workers in the city of Kolkata in India staged a march demanding their rights, defying pressure from conservative groups trying to stop their mobilization.

Following this, the day came to be commemorated as ISWRD, and since 2002, there have been protest activities, lectures, gatherings, art shows, etc, for raising awareness and furthering sex workers’ struggles.

This year as well, around 500 sex workers marched in Kolkata to mark the day.

In London, the English Collective of Prostitutes (ECP) launched the #makeallwomensafe campaign on this day, pushing for the decriminalization of sex work. Organizations from a number of other places, such as Durban in South Africa, New York in the United States, and Darwin in Australia, also called for the decriminalization of sex work.

In Brisbane, a small rally was organized, and in Chicago, a month-long art show is being held at a co-operative gallery, consisting of art pieces created by sex workers. The Sex Workers Network Bangladesh organized a human chain outside the country’s Supreme Court.

In a press statement, the Sex Workers Alliance Ireland (SWAI) said, “By pushing sex workers to the margins and criminalising their work we leave workers open to exploitation from 3rd parties. Sex workers are tired of being spoken about, not spoken to. Misinformation and use of stereotypes about sex workers used in the media damage the safety and their opportunities to access rights.”

The common demand in all these struggles is for legalization of sex work. This would enable sex workers to carry out their work in a safe manner and away from the constant threat of persecution and violence from authorities. Formal recognition of their work would also grant them platforms to lodge complaints in cases of violence or any other kind of abuse.

At the moment, almost all countries have imposed some kind of restrictions on sex work, if not outrightly criminalizing it. This causes severe hindrances for workers to access their rights, safety, and freedom from stigma.

In India, for instance, the current right wing government has introduced a legislation which it claims is aimed at protecting trafficking victims. This legislation, the Trafficking of Persons (Prevention, Protection, and Rehabilitation) Bill 2018, however, ends up conflating consensual sex work with trafficking and threatens the lives and freedom of all sex workers in the country.

Everywhere, sex workers have declared that they will continue their struggle until they achieve decriminalization of their work along with basic rights. They have also reaffirmed the need for sex workers to be allowed to lead the campaigns meant for their rights, calling for support in self-representation and self-organizing. 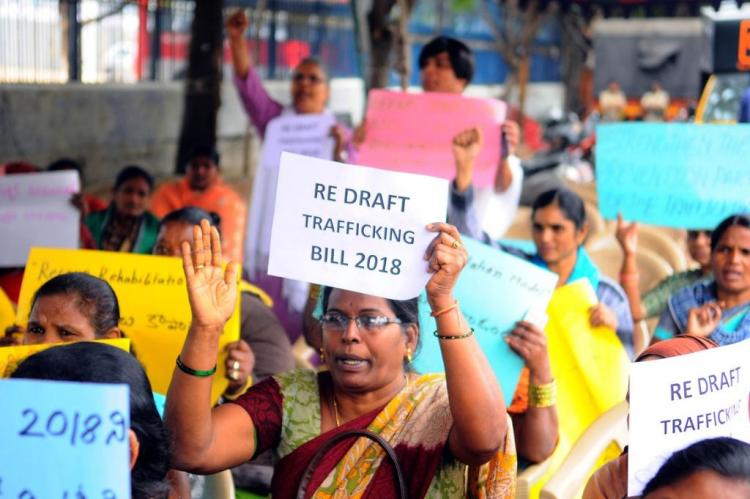