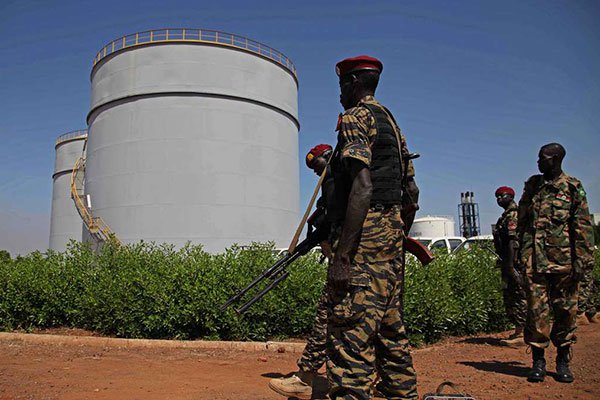 The five years of fighting has turned 2.2 million people into refugees, while internally displacing another 1.9 million. Photo: The East African

The civil war in South Sudan, the world’s youngest country, has entered its sixth year, with no end in sight as oil continues to fuel the conflict in which both government troops and the rebel forces have systematically committed large-scale atrocities.

The war began in 2013 after the then president, Salva Kiir Mayardit, dismissed his ministers and the vice-president, Riek Machar, whose supporters then broke from the governing SPLM (Sudan People’s Liberation Movement) and formed a splinter group SPLM-IO (SPML-in-Opposition).

The five years of fighting, mainly between these two factions has been marked by torching  villages, mass killings, rapes and abduction for sexual slavery. It has turned 2.2 million people into refugees, while internally displacing another 1.9 million. Together, this amounts to about 34% of the country’s population of little over 12 million. According to UN (United Nations) reports, 65% of women and 36% of men in certain conflict-affected areas have been subjected to sexual abuse. 60% of the country’s population suffer food insecurity.

In the non-diversified economy of South Sudan, oil is virtually the only source of wealth, and has been used by the warring parties to fund the arms, ammunitions and other costs. With 150,000 barrels of crude oil exported daily, the “economic and strategic importance of the oil-producing areas in Unity and Upper Nile States has been a major driver for the continuing violence, the ensuing human suffering and the violations of international humanitarian law witnessed there,” the UN Commission on Human Rights in South Sudan said.

In a recent report, the commission alleged that, apart from financing the war, the transnational oil companies, which reap a third of the profits, have been assisting the government troops by allowing them to use the companies’ air strips and other road infrastructures for their operations.

“There has been a lack of corporate accountability for transnational companies, several of which were conducting profitable business in oil-producing areas at times when mass human rights violations were perpetrated against the local population, and which in various ways were complicit in these crimes,” the report stated.

While western oil companies have ceased operations in the country, partly due to the pressure of complying with human rights obligations, a number of Asian companies have stepped in for oil extraction.

The report identified Dar Petroleum Company as the largest oil-extractor. The East African reported that 41% of the shares in this joint venture is owned by the Chinese National Petroleum Company, another 40% by Malaysia’s Petronas and only 14% by Nilepet, which is the country’s state-run oil firm.

40% of the shares in the Greater Pioneer Operating Company, which carries out extraction from the oil fields close to the country’s northern border with Sudan, are also owned by the Chinese National Petroleum Company. Petronas owns 30% of the shares, while 25% is owned by Indian Oil and Natural Gas Corporation. Only 5% of the shares are held by Nilepet.

The Indian firm owns another 24% shares of the Sudd Petroleum Operating Company, which will soon begin extraction from fields in the former Unity state. 68% of the shares of this company are owned by Petronas, while Nilepet owns the remaining 8%.

Nilepet has become a thoroughly militarized firm, as the National Security Services have been expanding its control over it. “Human rights have become a casualty in oil producing areas of the country, where the armed conflict has continued, coupled with the increased militarization and securitization of the oil industry by government forces,” a recent report by the commission stated.

Partnering with this firm, which has been used to finance and to provide logistical support for the actions of government troops, may amount to complicity in war crimes. In a strongly worded warning to these companies, Andrew Clapham, one of the members of the UN commission, said at the press-conference, “If you are involved in oil extraction in that area and you are asked to assist one side or the other, you could be accused of complicity in war crimes.”