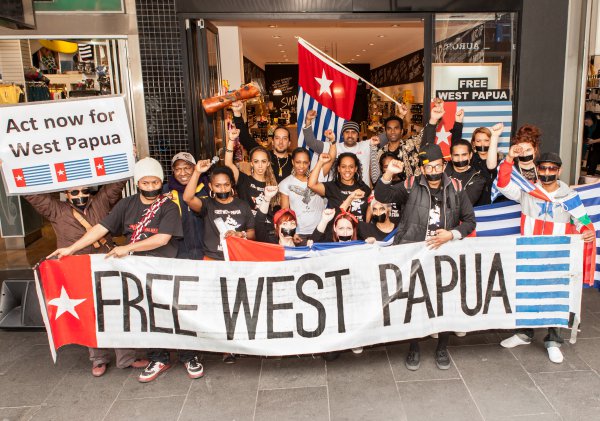 As Indonesia prepares for national elections in April, a new wave of military voice has hit the disputed West Papua region. Around seven people were killed on Thursday as gun fight broke out in Yigi village in the Nduga regency between the Indonesian National Armed Forces (TNI) soldiers and the suspected armed separatist group National Liberation Army of West Papua (TPNPB). According to sources, the military arrived to provide security to the construction of a road bridge for the Trans-Papua highway. The highway is contentious, primarily because it will facilitate the takeover of around 3 million hectares of land that the previous governments have leased for mining to several Australian corporations.

The West Papuans, and various armed groups fighting for independence from Indonesia, have alleged that the highway is an attempt to exploit the resource-rich region and push private mining companies.

The Nduga regency has become specifically vulnerable to separatist attacks over the past few months. The Thursday attack comes barely a week after a soldier guarding the Kenyam airport was killed by the TPNPB. The attack is also the latest since the murder of workers at the construction site of very same bridge on December 2, 2018. The site was attacked by an armed group of West Papua Liberation Organization (WPLO). The attack was reportedly prompted after one of the workers of the state-run Istakya Karya construction company was caught taking photographs of the militants commemorating the 1971 declaration of Papuan independence on December 1. The militants took 25 workers hostage, and shot them the next day at a nearby hilltop, killing 19 of them, and injuring 4, who pretended to be dead to escape. The WPLO claimed that the workers were not civilians, but armed TNI soldiers who also attacked them.

The December incident was followed by a heavy influx of TNI forces into Nduga, which prompted more counter-attacks. The government of president Joko Widodo of the Indonesian Democratic Party of Struggle (PDI-P) has pushed for stronger military action to crack down on the Papuan nationalist movement. The Indonesian rule in West papua is marked by numerous human rights violations, and has been met with severe resistance by the people. In December last year, Indonesian military was accused of using the banned chemical weapon, white phosphorus, against the population in West Papua.

The Papuan separatist movement has been raging since 1962, when the western Dutch-controlled territories of the island of New Guinea underwent decolonization, while the territorial dispute dates back to 1949. The territory was earlier part of the administration of Dutch East Indies, which was dissolved in 1949 when Indonesia gained independence from the Dutch colonial rule, while Western New Guinea remained under Dutch control. Independent Indonesia claimed the territory to be a part of Indonesia, by virtue of it being the successor state of Dutch East Indies.

The territorial dispute between Indonesia and the Netherlands turned into a conflict, with Indonesian military excursions into western New Guinea becoming quite common by the 1960s. By August 1962, the Dutch relinquished their control over the territory, and through a mediation by the United Nations (UN), handed it over to Indonesia in 1963 through the New York Agreement, on the condition that Indonesia would hold a plebiscite at a later date.

The Indonesian control of the territory has become among the most controversial military occupations of the century. After General Suharto’s military takeover of the Indonesian government in 1965, the military was handed complete control of disputed territories such as Papua. The Papuan independence movement that had disputed the Dutch and UN handing over of their nation to Indonesia, with little to no consideration of the opinions of the people, grew stronger and more powerful.

Suharto’s “New Order” regime gave the TNI, under General Sarwo Edhie Wibowo, the task of organizing the promised plebiscite. Wibowo was by then infamous for leading the anti-communist massacre of 1965-1966 that killed around half a million to 3 million Indonesians. In 1969, a highly controversial ‘plebiscite’ was held which did not have a popular vote, but only had 1,025 tribal representatives handpicked by the military who were made to vote at gunpoint for the sake of the UN observers. This unanimous vote, which was later named the ‘Act of Free Choice’, was recognized first by the United States and Australia, who successfully advocated for the legitimization of the supposed plebiscite within the UN.

Since the forcible integration into Indonesia in 1969, the Free Papua Movement (OPM), a constellation of different pro-independence political movements, has waged a large-scale insurgency against Indonesia. After the integration, the Suharto regime also undertook a policy of population transfer, called the ‘transmigration program’, whereby landless peasants, mostly from Java, were encouraged to settle down in Papua and other contentious territories. The program had funding and support of many Western countries, the Asian Development Bank and the World Bank.

Although the policy was formally ended by Widodo shortly after winning the presidency in 2015, it undermined the demographics of Papua. The indigenous Melanesians have been outnumbered by the mostly Muslim Javanese migrants, tilting the political loyalties and irreversibly altering the social and environmental landscape of the region.

On January 28, pro-independence activists submitted a petition for a second referendum to the Office of the UN High Commissioner of Human Rights (OHCHR) through the Vanuatu delegation to the UN. The petition had collected over 1.8 million signatures from all over Papua, representing over 70% of the indigenous population, by Papuan activist Benny Wenda, who was among the Vanuatu delegation. Vanuatu, along with Solomon Islands, is the last of the sovereign nations to recognize the Papuan right to self-determination.

The petition seeks a UN-mediated referendum and the recognition of the right to self-determination for the Papuans. This is the second appeal for a referendum by Papuan activists. A previous attempt in 2017 was rejected by the UN body that deals with independence movements on the grounds that Papua was never in the agenda of the body. Although the UN or the OHCHR are yet to review or take any action on the petition, the successful submission itself was ground-breaking and historic for the Papuan independence struggle.