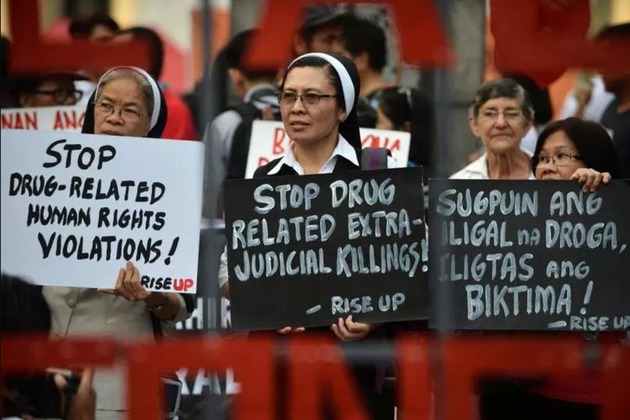 While the official toll in the 'war on drugs' is over 5,000, thousands more are likely to have been killed in extrajudicial killings. Photo: Irish Sun

On March 18, the Philippines officially exited as a signatory state party to the International Criminal Court. This follows the court initiating an investigation in 2018 into the “war on drugs” launched by the government of president Rodrigo Duterte. This ‘war’ has led to the deaths of thousands of people, many of whom were the victims of extrajudicial killings. The move also comes at a time when the government has recently extended military rule in southern Philippines and have increasingly cracked down on activists and journalists, of late.

Despite the fact that the mandate and some of the acts of the International Criminal Court have been controversial, the withdrawal of the  Philippines from the ICC has been seen as marking an end to the possibility of international scrutiny on the government’s anti-drug policy, which has largely affected the poor and drug users.  As of February 2019, going by the government’s own estimate, the number of deaths caused by the drug war stands at an alarmingly high 5,176. This number largely comprises drug users and includes at least a few dozen children. The government’s actions have also encouraged anti-drug vigilantes who have contributed significantly to the extra-judicial killings. According to human rights activists and opposition leaders, extrajudicial killings have led to the death of anywhere between 12,000 to 20,000 civilians since July 2016.

Speaking to Peoples Dispatch, journalist and militant Roberto Andres stated that the criticisms leveled against the ICC by the Duterte government were only a convenient cover. He said that while the leftist opposition and activists shared the criticisms against the ICC, “it is clear to the Left that Duterte … is using a belligerent independent stance when it comes to avoiding accountability for the wanton human rights violations committed under his term.”

The Philippines Coalition for the International Criminal Court (PCICC), a civil society organization that was key in successfully advocating for the country’s entry into the ICC, has strongly condemned the exit.

The Philippines signed the Rome Statute of the International Criminal Court in 2000 and ratified and enforced the signature in 2011, becoming a fully participating state party in November 2011. On March 17, 2018, the government of president Rodrigo Duterte, however, submitted an annulment notification, declaring its intent to leave the ICC, making it the fourth country to do so. With the exit now being official, after the one year notification period has expired with little challenge from either the judiciary or the legislature, the Philippines has become second signatory party, after Burundi in October 2017, to leave the ICC.

The ICC continued to follow up the case and collect evidence by August 2018, while the notification period was still on, after petitions from Filipino activists and family members of those killed in the drug war, for allegedly being drug users. The court continued the investigation even as the Philippines Supreme Court heard a petition by the PCICC against the government’s withdrawal notification. Now as the exit has been finalized, the current investigation on the drug war will now be deemed as a matter outside the ICC’s jurisdiction, making it illegal for the court to freely investigate the case any further without the explicit permission of the government. It is not known how much evidence and data the court has compiled regarding the case.

The International Criminal Court was established in 2002, under the terms agreed upon by the Rome Statute by dozens of countries. At the time of its formation, the Philippines was one of the signatories to the statute, being among the few Asian countries to sign the statute.  Several Asian countries, including India, Indonesia and China, have consistently raised concerns of sovereignty and the expansive and vague definitions of what may constitute a ‘crime’. Before Philippines, in 2016, Burundi, South Africa and Gambia had initiated the withdrawal, with only Burundi following through. This was following allegations of the ICC specifically targeting African nations and leaders, with Burundi and South African governments going so far as to call it a vehicle of neoliberalism. This was followed by a resolution by the African Union, after a heated debate, encouraging members to withdraw from the ICC en masse. Apart from that, several key signatories to the statute are yet to ratify and accede into ICC as a state party, including the United States, Russia and Israel, excluding a veritable majority of the world’s population from the court’s jurisdiction.

The Supreme Court of the Philippines, meanwhile, took the stand that there was a need to strengthen national and local judicial processes as opposed to a supranational process. The hearing on the petition is still ongoing and the PCICC remains hopeful. “A treaty already transformed into Philippine law cannot be undone by the one-sided act of the President” said the PCICC. They argued that a treaty withdrawal requires senate approval, which was never sought by the government. The petition seeks the court’s intervention to annul the withdrawal retrospectively, arguing that it is inherently unconstitutional.

As long as we are here, we will keep fighting: Filipino health activists brave repression
RECENT ARTICLES