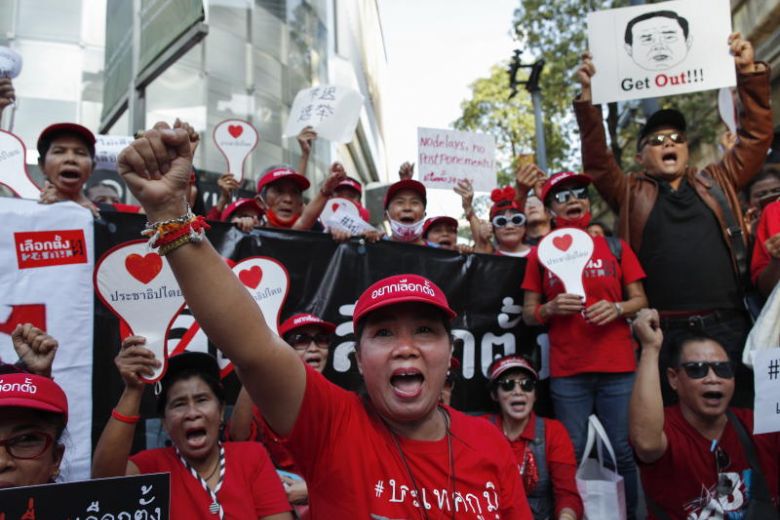 Elections were postponed a number of times in the five years since the military coup in 2014. Photo: Straits Times

After several delays and postponements since a coup d’etat five years ago, the people of Thailand will finally have their chance to vote on March 24. Despite around half a dozen political parties being in the fray, with around a dozen prime ministerial candidates, the elections this time will not be a step towards democratization. Thailand has been through the longest spell of junta rule since 1973 and the current military government has taken legal and constitutional measures to keep itself in power, no matter what the results be.At the same time, a resurgent people have been mobilizing to ensure democracy is restored.

The 2014 military coup came in as the popularly elected government of Yingluck Shinawatra a declared flash election, almost a year ahead of the end of its term. The military, led by general Prayut Chan-o-cha, dissolved the caretaker Shinawatra government and replaced it with the National Council for Peace and Order (NCPO) with himself as the prime minister. It was the 12th coup in Thailand since 1932. The new government also disbanded the legislature and suspended the constitution, and by extension declared the yet to be declared results of the 2014 general election, conducted under the provisions of the nullified constitution, as invalid.

The junta government under prime minister Chan-o-cha embarked on a constitution-making process. Previous military governments in Thailand would eventually give way to civilian rule, usually through fairly free and credible electoral processes. Those military leaders with political ambitions would form a party to win elections and remain in power. But since the late 90s, pro-military parties have consistently lost elections, with populist governments like Thaksin Shinawatra’s Thai Rak Thai and its later manifestations, People’s Power Party, and the current Pheu Thai Party and the Democrat Party having formed all the governments since 1997. And so to prevent another relapse into democracy, the junta’s constitution has ensured a major role for the military in the formation of any government.

Two of the provisions of the new constitution adopted in 2017 are worth taking a look at. Firstly, the disbanded Senate will be reconstituted but will this time be composed of military appointees. It will also have the power to elect the prime minister. Secondly, the House of Representatives has been reconstituted but with seats reserved for military appointees who will have full voting rights.

These provisions institutionalizes the junta as a legitimate and entrenched part of the government. The arrangement is quite similar to that in Myanmar, where despite the transition, the military continues to hold great deal of influence in the government. So even if a belligerent anti-military political group forms the next civilian government with an overwhelming majority in the lower house, the military would still have considerable influence over it. It would be even easier for the junta to control governments with smaller majority or no clear majority, with enough powers for the military to make or bring down weaker governments, without undertaking a coup.

To add to that, there is a fair share of controversy surrounding the redrawn House of Representatives constituencies. In the new Constitution, the number of constituencies was brought down from 375 to 350. The redrawn constituencies were supposed to be declared by the election commission by November 17, 2018. But prime minister Chan-o-cha used his executive powers to scuttle the declaration of the constituencies at the last minute, and delayed the release of the new electoral map till the end of the month. The fact that the election commission’s press conference was cancelled because of the executive orders, made both politicians and activists suspicious of the military meddling with the elections. The commission members themselves were all appointed by the NCPO, and they final constituency map was prepared as per the orders and regulations put up by the same in November. There have been accusations of gerrymandering by the government to favor the pro-junta political party, Palang Pracharat, which has declared Chan-o-cha as its prime ministerial candidate and has four sitting ministers in the junta government in the leadership.

Nevertheless, an election is about to happen and there is palpable resentment towards the government and the military rule. This was evident in the protests of January which thousands participated across the country, against the government’s sixth postponement of the general election. According to surveys and opinion polls, even though the junta premier Chan-o-cha seems to enjoy significant popularity, Palang Pracharat is behind the Pheu Thai Party by double digit percentage points. Pheu Thai’s most popular prime ministerial candidate is Sudarat Keyuraphan, a former minister in Yingluck Shinawatra cabinet. She had also co-founded the Pheu Thai’s original predecessor Thai Rak Thai, along with Thaksin Shinawatra. Even though Keyuraphan is trailing behind Chan-o-cha as a prime ministerial candidate, her margins have improved significantly over the past few months, with the difference between the two in terms of popularity coming down to less than 5%.

Some other parties have also taken the political scene by storm. For instance, the Future Forward Party led by Thanathorn Juangroongruangkit, is barely a year old, and is already among the largest parties by membership, with over 50,000 according to the party’s own figures. The FFP is an umbrella organization that has take within it a plethora of peoples struggles, from trade union movements to peasants rights struggle to new burgeoning pro-democracy struggle. The party itself has attracted the imagination of the young generation, who are around a tenth of the voters and have grown weary of the predominance of the conservative, and sometimes lowkey pro-junta, Democrat Party and the Shinawatra clan in Thai politics, and are actively looking for change.

The election this time around, is a strictly regulated affair. Candidates and members of political parties contesting elections are not allowed to speak to the media. Activists have been put under stringent watch, lest they talk to foreign media houses that are now covering the elections with a great deal of interest. Canvassing for votes are terribly limited, with most common practices like political rallies and roadshows being strictly regulated. But mobilization for change and democracy is progressing in the earnest, and one can see that with the way anti-junta parties, despite the defections of leaders to Palang Pracharat, are able to draw crowds as part of their campaign.