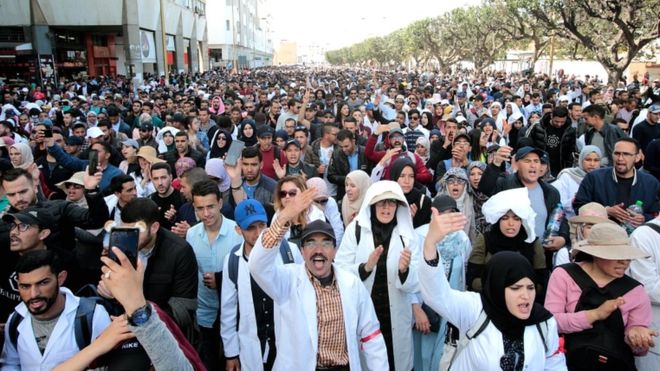 After four weeks of teachers’ strike in Morocco against what they’ve called as “forced contractualization”, the government has threatened to sack the teachers if they do not return to work. The agitation of teachers began on March 3, demanding permanent jobs and the benefits of working in public sector which are not accorded to those hired under temporary contracts.

Speaking at a press conference only days after the police used water cannons to disperse about 10,000 teachers who were demonstrating before the parliament last weekend, Education Minister Saaid Amzazi threatened to fire those who led the strike and those who who refuse to return to work.

Since 2016, to make up at a lower cost for those vacancies left behind by permanent teachers who have retired, approximately 55,000 teachers have been hired on contractual basis. These teachers earn MAD 5,000 (around 517 USD) a month, which is as per the ninth pay commission. One of the demands of the teachers is that they be paid according to the 10th pay commission, which would add an additional MAD 1,500 (around 155 USD) to their salary, Morocco World News reported.

In an attempt to reach a compromise, the government offered on March 10 that those currently on temporary contracts will be hired as full time employees by the regional academies. However, the unionized teachers rejected this offer and vowed to continue with the strike action until they have contractual employment abolished as a category all together.

Oussama Hamdouch, a member of the National Coordination of the Forcibly Contracted Teachers, told Morocco World News that the regional academies are not allocated with sufficient financial resources to meet the demand raised through their union, which asks for the contractual teachers to be accorded with the same benefits available to those employed by national academies who are regarded as public servants.

“They lack the human and financial resources teachers need,” he said, adding, “The academies will be able to fire teachers if they don’t have financial resources whenever they want to. School principals will also have a certain authority over us. We want to work with dignity like the other teachers in the public sector.”