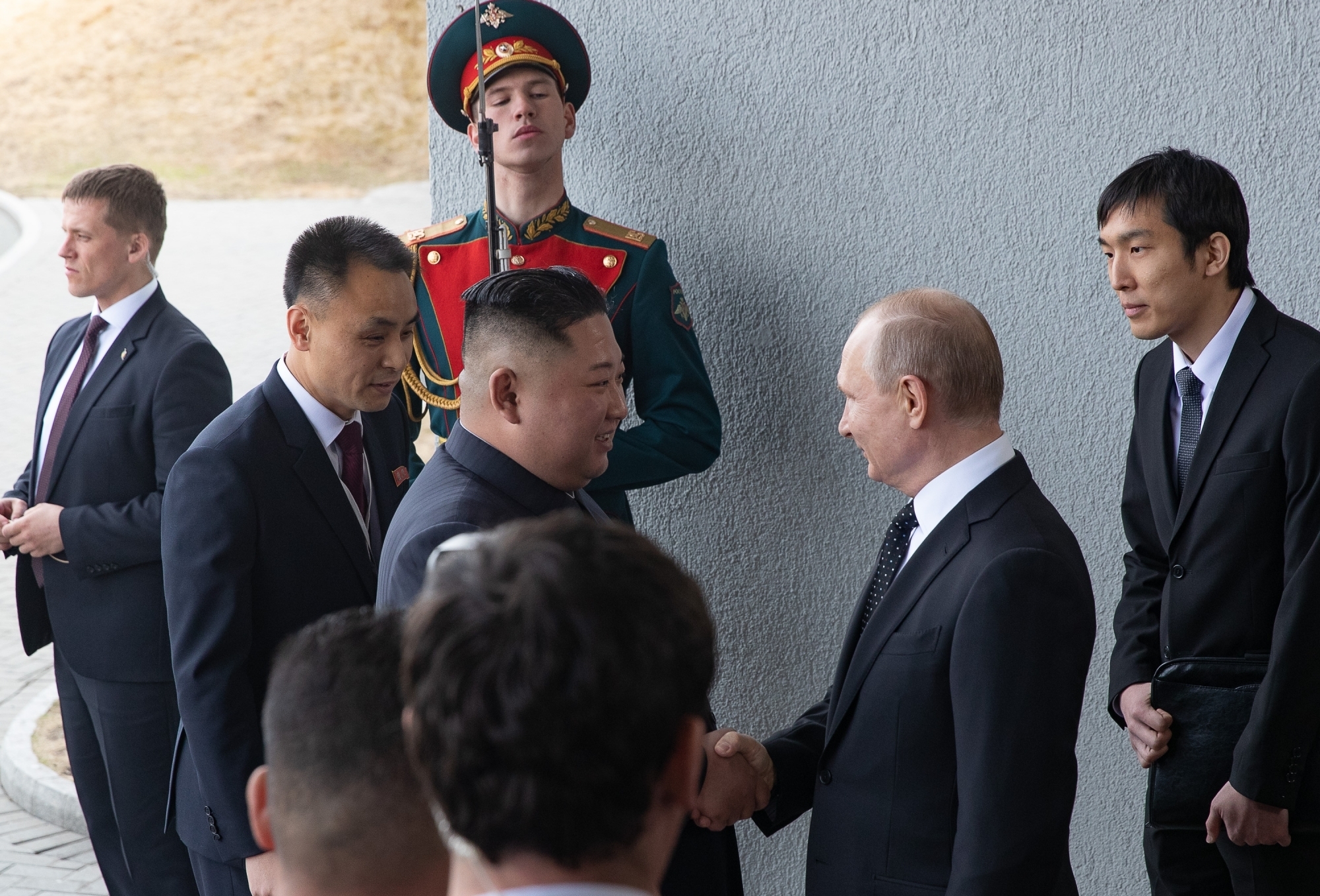 North Korean leader Kim Jong-un and Russian president Vladimir Putin held a summit today in the backdrop of the ongoing US-South Korea military drills which has outraged the North.

The summit in the city Vladivostok was Kim’s first visit to Russia. The previous visit by a North Korean head of state to Russia was in 2001, by his father Kim Jong-il.

18 years later, barely two months after the Hanoi summit with Donald Trump broke down with no agreements reached, Kim Jong-un rode in an armored train to Vladivostok, about 130 kilometres inside the Russian border with North Korea. Upon his arrival on Wednesday, Kim was greeted and received in the city, from where he traveled to Russky island for the summit on Thursday.

The main topic scheduled for discussion was the stalemate in the progress towards denuclearization of the Korean peninsula as the US and North Korea differ on how to go about it. The US is demanding complete denuclearization before making any concessions and North Korea is insisting on a phased approach where every move towards the denuclearization will be reciprocated by the US in form of easing sanctions and providing of security assurances. Bilateral relations, trade and humanitarian aid were some of the other issues on the table.

After about an hour long one-to-one interaction with President Putin, followed by a meeting between delegates representing both sides, a press conference was held where both the leaders spoke briefly.

“I got the impression that Kim Jong-un is interested in denuclearization, all North Korea needs is guarantees of its security and sovereignty,” Putin said. He added that such guarantees can only be provided if international law takes precedence over “rule of strength” – a thinly veiled jibe at the US.

The US, far from making any efforts to reassure North Korea that it faces no security risk by giving up on nuclear weapons, has started another round of war games, along with South Korea, on this Monday.

Lasting for two weeks, this US-South Korea joint military exercise, simulates invasion into North Korea, bombing of cities etc. A variety of warplanes, including F-15K, KF-16 and F-16 are deployed.

North Korea’s Committee for the Peaceful Reunification of the Country (CPRC) issued a statement, while Kim was at the summit, criticizing this decision of South Korea as a violation of the Panmunjom Declaration and the subsequent joint declaration in Pyongyang, where the both the divided Koreas committed to work towards demilitarization, ending of hostilities and eventual reunification.

South Korea maintains that, in light of the improvement in relations between the two sides, the previous joint military exercise named ‘Max Thunder’, was scrapped. The current exercise, it claims, is of a smaller scale.

“They are seriously mistaken if they think they can give relief to us and stay clear of the public criticism at home and abroad with such trite nonsense,” read the CPRC’s statement. “In March also, the south Korean authorities held a joint military drill under the codename of Alliance.” This new drill replaced the previously ongoing ‘Key Resolve’, which South Korea had agreed to suspend.

“They can never conceal the aggressive, offensive and confrontational nature of their hostile acts no matter how hard they may try to give impression about “reduction in scope” by replacing the codename,” the statement further read, adding, “Now that the south Korean authorities get undisguised in their military provocation against the DPRK together with the U.S., there will be corresponding response to it from our army.”

Early last month, Donald Trump, in what appeared to be a frustrated expression of his inability to understand or rein in the thrust of the US military establishment, had tweeted: “The reason I do not want military drills with South Korea is to save hundreds of millions of dollars for the U.S. for which we are not reimbursed. That was my position long before I became President. Also, reducing tensions with North Korea at this time is a good thing!”

At the press conference following the meeting with Kim, Putin urged South Korea to be more independent of the US in its dealings with North Korea.