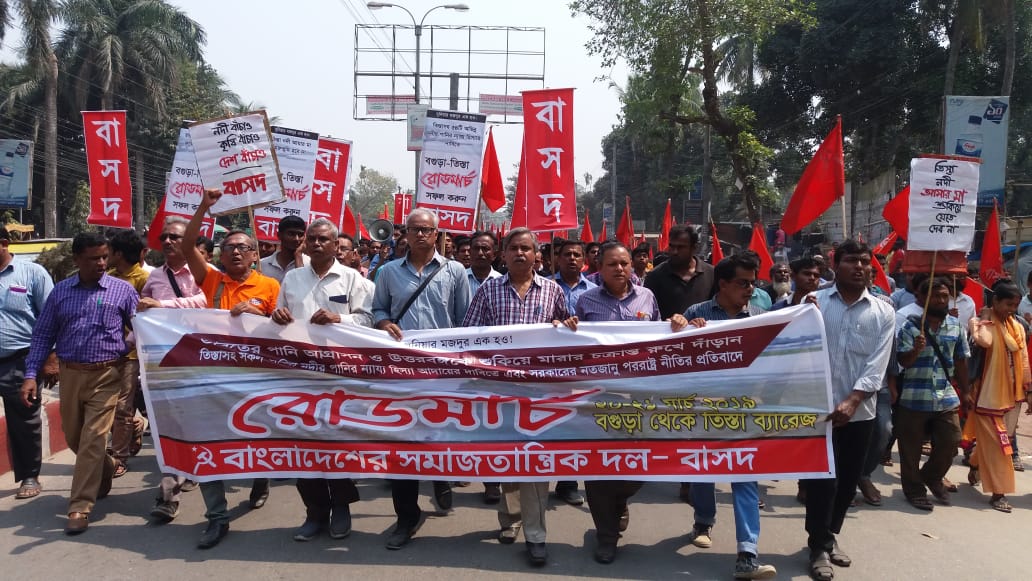 In the past year, the Bangladeshi government has scaled up repressive policies in order to control the unprecedented agitation by textile workers across the country. Workers denounce that the government has come down heavily against their union leadership, filing false allegations and imposing mass termination of workers to stifle their collective actions.

“The government has tried to hide the brutality of the scenario of persecution by initiating some nominal amendment in wage scale. But they still disregarded the demand of fair wage. Also, the declared wage scale is still not executed in every factory,” Bazlur Rashid Firoz, who is a member of the central committee of the Socialist Labor Front, told People Dispatch.

On top of this, the Sheikh Hasina-led government has brushed aside the demands of the workers. “Instead of punishing those responsible for declaring such discriminatory wage scale, it tried to suppress the movement by enforcing police,” Bazlur said.

Anthropologist Hassan Ashraf, who has worked extensively on the practices of global garment production and labor politics in Bangladesh, illustrated three arguments to show the widening gap between formal labor unions and day to day experiences of the workers in the country.

“Firstly, the industry’s (fake) consensus that Bangladeshi garment factories are now safe is based on a narrowly technocratic view of safety that neglects how structural conditions of precarity routinely produce violence, coercion, and ill-health for workers.” “Second, labor unions’ increasing participation in safety initiatives which has deepened an existing division between the formal trade union movement and workers’ everyday forms of coping, resistance, and protest.”

“Third, this widening gap and protests leaves workers exposed to a continuing erosion of labor rights. Militant labor protests have advanced workers’ interests, but such practices are increasingly subject to state repression and violent crackdowns,” he argued.

For several days in mid-January, thousands of workers in Bangladesh hit the streets of Dhaka and other cities  demanding that their monthly salary be doubled from 8,000 Tk to 16,000 Tk ($191 per month). The use of force by state apparatus left worker Suman Miya dead and fifty others injured.

Between February and March, more than 12,000 workers were intimidated and fired from their jobs in 107 factories and about 30 cases were filed against more than 5,000 workers. “These workers were not re-appointed and in most cases they did not even receive their legal compensation,” Bazlur said.

Among the 4,500 garment factories that are functioning, the number of registered trade union approximately is 650, and out of them only 50 remain active. “Since there remain legal changes to constitute a trade union but it still does not change the severity of the situation,” Bazlur added.

The textile industry of Bangladesh is the second largest in the world after China, with exports valued at almost $30 billion last year. But most of its workers are finding it difficult to make ends meet under the current pay scale of $95 per month. Out of total workers, women make up 85% of the workforce in the textile industry, most of whom are forced to work in the absence of basic amenities and without the proper enforcement of laws granting maternity leave and benefits.

46-year-old Nilofar Yasmin, is one such Asha garment workers who admitted that working in a garment factory in Bangladesh means: “You have agreed to reduce your lifetime. It is an innate part of the job, and inescapable.”

The 2013 Rana Plaza factory collapse was one of the worst industrial accidents that saw the deaths of 1,134 people and over 2,500 injuries. The collapse has been a defining moment in the history of Bangladesh’s garment sector. The incident triggered the world attention towards the miserable conditions under which millions are forced to work in.

The fallout of the recent protests culminated in a change in building infrastructure and improving fire-security, however Balzur adds “the demand to change the law of compensation due to death in working place is still out of question”.

Anthropologist Hassan Ashraf 0f Jahangirnagar University in Bangladesh believes that the prevalent situation workers finds themselves trapped is due to “the fraught relationship between precarious workers and traditional labor unions by showing that when unions devote themselves to the technocratic improvement of labor standards without confronting the structural conditions of precarity itself, workers can be stranded with little power but to effect change except through militant confrontations that are violently suppressed”.