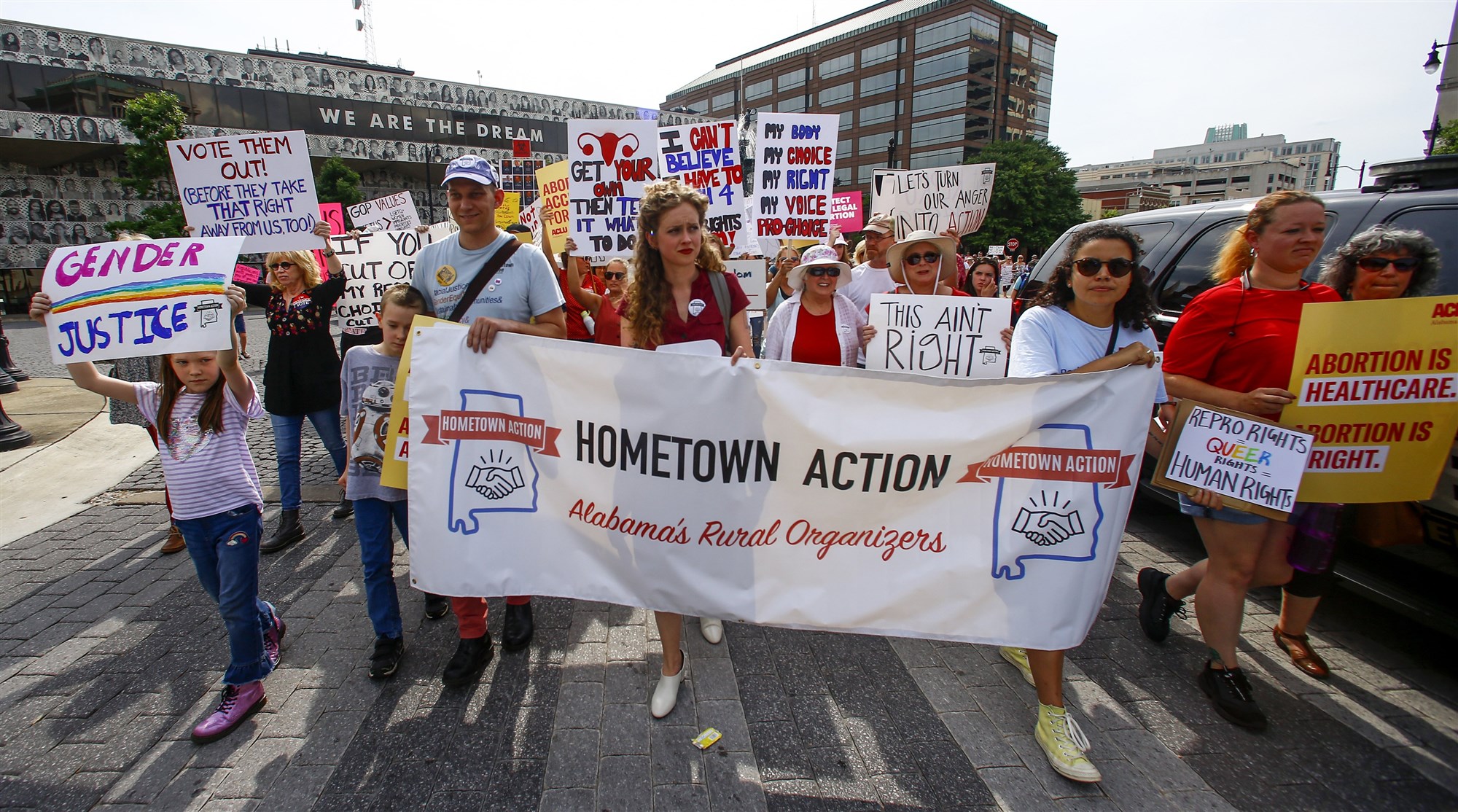 The rally was attended by hundreds of protesters, including college students who said they were prepared for a long fight.

Hundreds demonstrated across Alabama on Sunday, protesting the State’s new law which places an almost blanket ban on abortions. Students, allies, activists and advocacy groups took to the streets of Birmingham, Anniston and Huntsville. Protesters in the State’s capital, Montgomery, marched to the Alabama Capitol, chanting “My body, My choice!” “Stay out of my uterus” and “Vote them out!”

The bill was passed in the Senate last week by a margin of  25-6. The strictest pro-life legislation to have received approval, it makes the performance of abortion by any medical professional a class A felony and punishable by 10 to 99 years in prison. The law does not allow for an exception in the case of rape and and incest, and permits an abortion only if the mother’s life is in danger.

Reproductive rights activists fear that the criminalization of abortion will push the practice underground and force women to choose unsafe alternatives. “Banning abortion does not stop abortion. It stops safe abortion,” said Staci Fox, CEO and president of Planned Parenthood Southeast, addressing the demonstrators outside the Alabama Capitol.

The rally saw the active participation of women college students who said that though they were fearful of their future in the State, they were also determined to not let it encroach upon their reproductive rights. Brynleigh Davis, a student of Auburn University at Montgomery, said “I’m mad, I’m angry and I am here for the long run. I would tell them that it’s okay to have their own opinion but that is not what I believe and I don’t think that they should tell anyone else what they should do with their body.”

Many fear that the law is especially dangerous for women from marginalized communities who will be disproportionately targeted by it. The number of accessible abortion clinics in the State has dwindled from more than 20 in the 90s to just 3 in 2019. The present laws of the State also  require women to make two trips to the clinic for their procedure, which can be difficult for women from low-income groups.

Laura Stiller, one of the protestors who was also demonstrating as the bill was being deliberated upon, said “Wealthy women in this State, they’ll just travel. We all know this law won’t apply to them. For those who are victimized, marginalized, poor, underage, traumatized, the only thing this does is jeopardize women’s and infant health. You are creating a culture of shame.”

Legislation to restrict abortion has been introduced in 16 of the 50 States this year alone. Kentucky Mississippi, Georgia, Ohio, Missouri and Tennessee are already in the process of adopting ‘heartbeat bills’ which ban abortion as soon as a foetus’ heartbeat is detectable, or around the sixth week of pregnancy.

Alabama and other States are enacting abortion restrictions as a part of a larger Republican-led plan to get the conservative-leaning U.S. Supreme Court to revisit the monumental Roe v Wade ruling that legalized abortion countrywide in 1973.

Some States are calling for a boycott of Alabama over the bill. Last week, officials in Maryland and Colorado called for economic retaliation and urged people not to buy anything in, or from Alabama.

Maryland’s Democratic Comptroller Peter Franchot said he would advise his State’s $52 billion pension fund to divest from Alabama, and urged other states to follow suit. Colorado’s Democratic secretary of state Jena Griswold called for a boycott of Alabama and urged the Election Center, an organization that trains election officials from across the country, to move out of the State.1111

Democratic leaders, including presidential candidates Elizabeth Warren and Bernie Sanders, have heavily criticized the bill. Planned Parenthood and the American Civil Liberties Union say they plan to sue the state to try to block the law’s implementation.