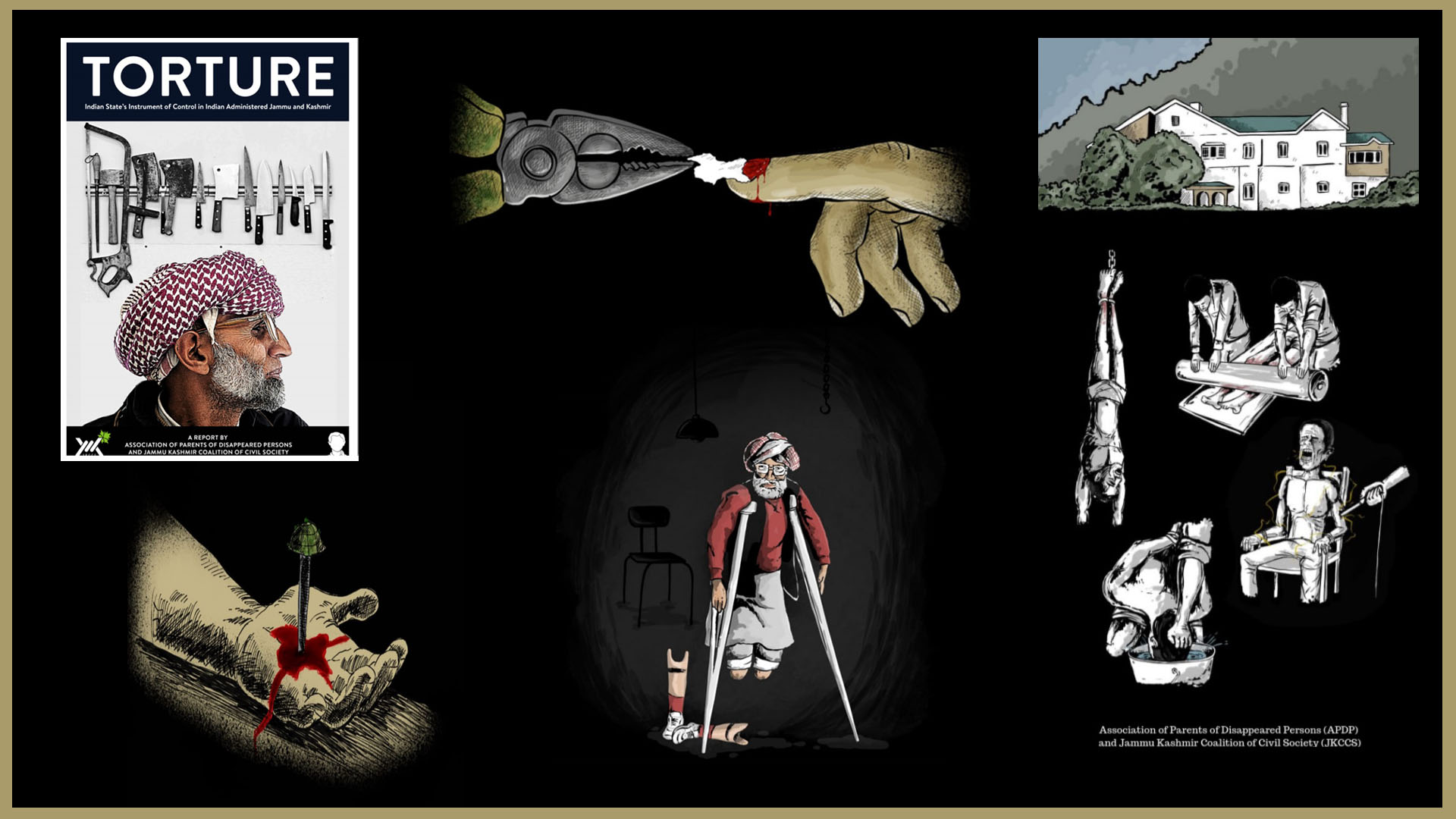 A 550-page study, titled “Torture: Indian States’ Instrument of Control in Indian Administered Kashmir”, exposes the torture perpetrated by the Indian State in Jammu and Kashmir since 1990. The study was conducted by two human rights groups, the Jammu Kashmir Coalition of Civil Society and the Association of Parents of Disappeared Persons. “Torture is the most under-reported human rights violation perpetrated by the State,” said study, adding, “Due to legal, political and moral impunity extended to the armed forces, not a single prosecution has taken place in any case of human rights violations in the region.”

In Kashmir, torture has been used by Indian armed forces without any regard for gender, age or political affiliation. Of the total 432 torture victims studied for the report, 301 were civilians, 119 were militants, and 27 were minors at the time they were tortured. Solitary confinement, sleep deprivation, and sexual torture, including rape and sodomy, are some of the measures used to torture Kashmiris. Other methods of torture include electrocution, roller treatment, mutilation, burning, hanging from the ceiling, inserting needles inside the rectum, and forcing prisoners to drink filthy water mixed with chili powder.

Bashir Ahmed Rather from northern Kashmir’s Baramulla district was arrested and tortured ruthlessly in 1993. In his testimony, in Case 92 of the report, he said that apart from hanging him upside down and giving him roller treatment, flesh from his buttocks was plucked and the wounds were rubbed with chili powder. Electric shocks were applied to his penis and ears. One of his testicles was damaged and both his legs were broken. Despite such injuries, the army denied him a visit to a doctor or hospital. He was tortured continuously for a month.

Soon after armed revolt against the Indian rule began in 1989, the counter-insurgency measures adopted by Indian forces in the form of Cordon and Search Operations became widely dreaded and commonplace events. During these operations, a large number of atrocities took place, including mass sexual violence and torture, illegal arrests leading to eventual disappearances, as well as custodial and extra-judicial killings, the report highlighted.

Another civilian, Bashir Ahmad, who worked as a farmer, was arrested by the army in March 2001. He was brutally tortured, stripped naked and was set on fire. Petrol was poured over his body and his face, leaving his body badly burnt and his face completely disfigured. Boiling water was later poured on his already wounded naked back.

Other victims, such as Muzaffer Ahmed Mirza from Tral and Manzoor Ahmad Naikoo from Palhallan, were subjected to more humiliating torture. In their testimonies of horror, they admitted that a rod was inserted through their rectum which caused multiple ruptures to their internal organs. One of the victims (Mirza) succumbed to injuries in the hospital a few days later. Naikoo, however, was forced to undergo five surgeries.

“Apart from insertion, a cloth was wrapped around Naikoo’s penis and set on fire,” said the report. As many as 33 victims admitted that they were forced to eat or drink filthy and harmful substances like human excreta, chili powder, dirt, gravel, chili powder mixed with water, petrol, urine and dirty water.

Soon after the report was released in May, several rights groups urged the United Nations to set up a commission of inquiry to investigate the endemic torture trails and systemic violence perpetrated by Indian forces in the region.

Systemic torture used as a “matter of state policy” and “instrument of control” remains hidden in the region, where tens of thousands of civilians have been subjected to torture for several years in an institutional manner.

“Torture is not a crime under the Indian law. Although India remains a signatory to the United Nations Convention against Torture, it has not ratified the treaty till date,” Parvez Imroz, a lawyer and prominent human rights activist who has a leading role in formulating this report, told Peoples Dispatch. “Torture isn’t just a human rights violation. It is a crime against humanity when committed in a systematic and institutional manner, which, in case of Kashmir, has been so till date, unabated.”

“The number of tortured victims in Kashmir remains on a higher scale than Guatemala Bay and Abu Ghraib which invoked international condemnation from rights groups about the torture techniques being inflicted on the prisoners inside these prisons. However, in the context of Kashmir, torture of a similar nature becomes a non-issue. The report doesn’t give us the exact numbers. There are tens of thousands of persons who were tortured in the last three decades. And such a pattern continues. Our estimates suggest that the figures could be huge, the 432 victims are just the tip of the iceberg,” he said.

“Among every 15 Kashmiris, you will find one torture victim. However, the worrying sight remains the double standards. If torture techniques in Guantanamo Bay and Abu Ghraib can invoke serious backlash and international condemnations, why is silence being maintained with regard to Kashmiri torture victims? Isn’t it ironic that no international body could visit this region over these years and prepare a report on torture?,” Imroz said.