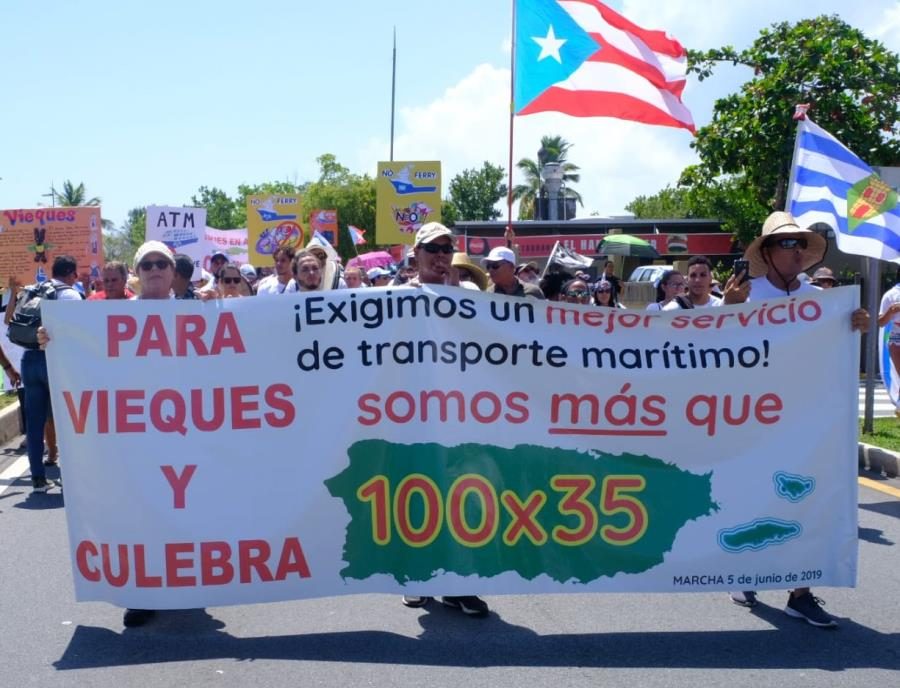 On June 4 and 5, the inhabitants of Vieques and Culebra islands in Puerto Rico mobilized in the capital San Juan demanding dignified water transportation services between the main island of Puerto Rico and the two islands. The mobilization was also carried out to reject the government’s proposal that seeks to privatize water transportation services. On both days, the residents held a vigil in protest in the peace hall of the Luis Munoz Rivera Park in San Juan. The call for the demonstration was given by the Somos más que 100×35 collective.

“At this moment the system has collapsed. Consequently, access to essential services such as health, educational, legal, funeral, food, religious, sports and recreational activities, among others, has been affected. We are facing a scenario of uncertainty where the Marine Transport Authority (ATM), every day, puts at risk the well-being, the quality of life and the very life of the human beings that inhabit the municipality,” said Erica Boulogne, the leader of Somos más que 100×35 collective to Resumen Latinoamericano.

The residents of the two Puerto Rican islands have been living in crisis for decades and are demanding that the government take concrete actions to solve the historical problem with water transportation to Vieques and Culebra. They demand that they be included in the decision making that impacts them directly. A clear boarding protocol for the boats that comply with fixed schedules of travel for passengers and cargo, availability of boats with an adequate passenger capacity, better treatment of the ATM employees and an easy ticket purchasing process are some of their demands.

On June 5, over 200 people carried out a march from the park to the Capitol building in Puerto Rico. The protesters marched raising anti-government slogans such as ‘Negligent government, who does not listen to its people’ and ‘Don’t be criminals, support local businesses’. They also condemned the poor water transportation services with strong messages written on banners and placards like ‘For Vieques and Culebra, we demand better water transport services’, ‘No to privatization, No to rise in tariff, Yes to referendum on routes to Vieques’, etc.

In addition, on the same day, a group of protesters, mainly comprising young women, held a peaceful demonstration outside La Fortaleza, the official residence of the governor. They blocked access to the three entrances of the governor Ricardo Rosselló Nevares’ mansion to hinder the everyday official work of the office. This, they explained, was an attempt to give the authorities the taste of what the inhabitants of the two island municipalities go through each day when they cannot get out of the island to go to their jobs, schools, universities, for medical appointments or for many other purposes. However, the protesters were violently removed from the passage by policemen present there.

Vanessa Castillo, a resident of Vieques, explains the everyday struggle of the inhabitants: “Imagine that you live in a town of Puerto Rico and you have to reach another town for some routine procedure. You get up early and go on the road and you find that the streets closed for repairs and now you cannot leave your town because there are no alternative routes, so you decide to do it another day. But the next day they tell you that they opened the street and only 68 cars can pass, and there are hundreds of cars waiting to pass. Let’s say you were one of the lucky ones that managed to pass that day, but no one guarantees that you can return to your home.”

“The sea is a road and the ferries and/or motor boats are our means of transport. They are giving us a terrible service and we need changes! We need the government to listen to us! No kidding, it’s our lives that are at stake here. We are having a crisis because of the Marine Transport Authority (ATM) and its mismanagement,” Castillo commented.