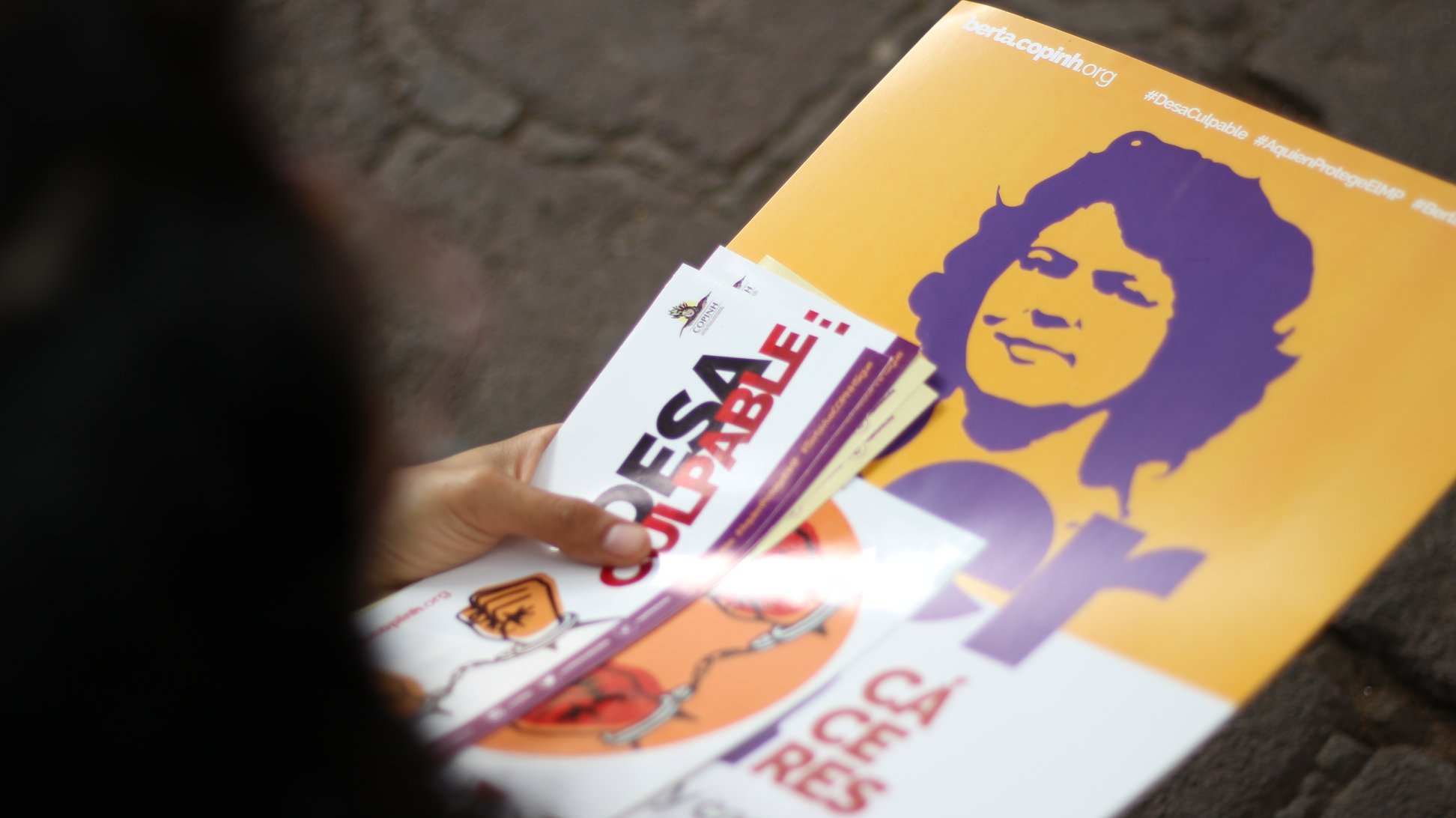 COPINH launched the DESA is Guilty campaign in September to demand justice in the Berta Cáceres case. Photo Credit: COPINH

The Civic Council of Popular and Indigenous Organizations of Honduras (COPINH) reported that on July 5 that Olvin Gustavo García Mejía was found dead in the San Bartolo community, in the north region of the Intibucá department. García Mejía was an unofficial employee of the Desarrollos Energéticos S.A. (DESA) company and allegedly carried out their dirty work of threats, intimidation and even selective assassinations in order to pave the way for the construction of their hydroelectric project, Agua Zarca. COPINH released copies of chats between DESA executives David Castillo and Sergio Rodríguez calling García Mejía their “best security at the dam”.

In a communique, COPINH said that “With the death of Olvin García Mejía, a key witness is buried and the truth about the plans of the DESA company to assassinate Berta Cáceres are hidden.”

On November 29, 2018 seven men were convicted of participating in the assassination of Cáceres. Though the decision was celebrated, COPINH and Cáceres’ family members warned that the convictions of merely the hit-men who pulled the trigger did not mean that justice had been done. Furthermore, the trial was full of irregularities and violations which even included the exclusion of the victim’s legal representation from the trial.

Above all, there was a systematic denial of the context within which the assassination occurred, wherein Cáceres and her organization COPINH were leading a struggle against the development of the Agua Zarca project. Cáceres, as well as many other members of the organization, faced repression, intimidation and violence by DESA, Honduran security forces and private security in an effort to break their resistance to the project. García Mejía was one of the individuals hired to carry out this work.

COPINH reported that in December 2015, Olvin García was planning the assassination of Cáceres and leaders of the community under the orders of DESA. His plans however, were thwarted when he was arrested the same month for illegal possession of weapons. At that point, there was also a pending arrest warrant against him for the assassination of COPINH sympathizer Bernardo Pérez.

Only four days after his arrest, Olvin García was released thanks to David Castillo, president of DESA, Daniel Atala, DESA’s chief financial officer, and Sergio Rodríguez, the social, environmental and communications manager of DESA who was convicted in November 2018 for participating in the murder of Berta Cáceres. COPINH released chats between Castillo and Rodríguez where they discuss how to get Olvin García out of prison, stressing his importance to their operation, and that Daniel Atala would provide the funds to pay for the lawyer and the bail money. The speed with which they were able to manipulate the justice system and achieve the release of someone facing severe criminal charges highlights the collusion between the DESA company and structures of the Honduran state.

A key link to David Castillo

DESA president David Castillo was arrested in March 2018 and accused of participating in the assassination of Berta Cáceres. Castillo is a US-trained military intelligence officer of the Honduran Army and participated in the military intervention and management of the public sector company Electrical Energy of Honduras.

During Castillo’s preliminary hearing held in April 2019, the prosecution said he had “authorized the allocation of resources for people to fulfill functions of infiltration, monitoring and attacks on the communities where the construction of Agua Zarca was planned, on COPINH and Berta Isabel Cáceres.” His objective was “to control, neutralize, and eliminate social denouncements of the violation of human rights through the granting of the concession and construction of the project of the company that he was part of.”

He was “informing on the movements of Berta Cáceres through communications with high executives of the company and employees.”

COPINH and the victim’s legal defense has shown that David Castillo was one of the minds behind the assassination of Cáceres who not only worked with high-level executives to coordinate and finance the assassination but also helped coordinate the death squad which killed her.

In the next couple of months, another preliminary hearing will be held where the Honduran justice system will decide whether Castillo should go to trial. Due to his key role linking the hit-men to those who planned and financed the attack, DESA has invested tens of thousands of dollars to attempt to clear his name and prevent him from going to trial. They have bought hours of television programming where his family members go on air to speak of his accomplishments, his good character, the lack of credibility of the evidence against him and insisting on his innocence.

In this context, the death of Garcia Mejía who clearly could have provided important information about Castillo and his role in planning Cáceres’ murder, is a serious blow. COPINH wrote in their communique “We ask ourselves, if this death is part of a plan to erase the evidence and connections of David Castillo Mejía with the violence in the community of Río Blanco and the assassination of Berta Cáceres, along with their media campaign of deceit and lies.”