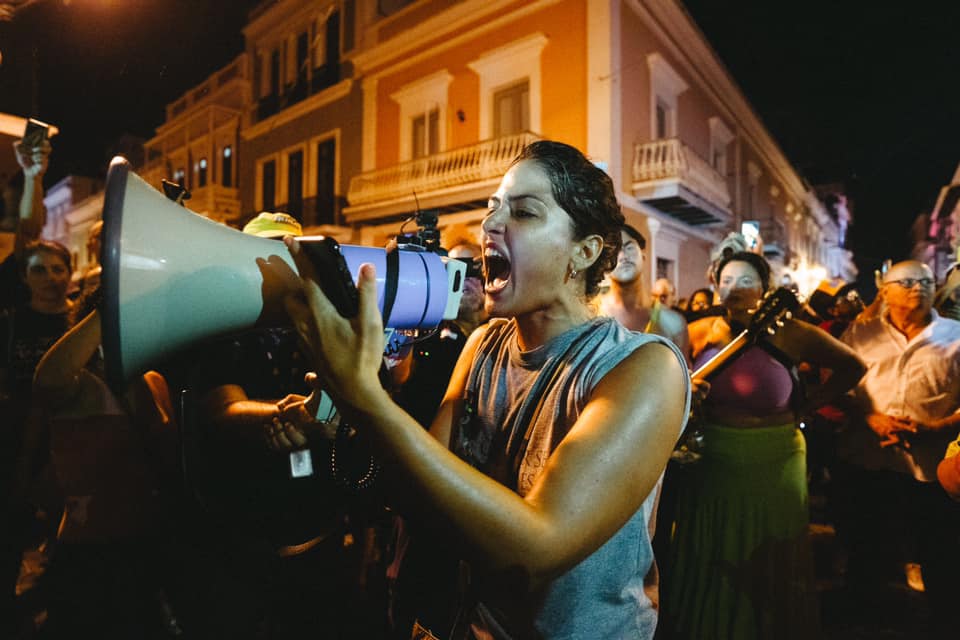 Protesters in Puerto Rico yell "Ricky resign and take the Board (FCB) with you. We demand the resignation of Ricky, the legislature and the Fiscal Control Board." Photo: Four Two Photography, David Diaz

The people of Puerto Rico have had enough. Over the past couple of days, the Boriquen people on the island and across the diaspora have been mobilizing en masse to demand the resignation of governor Ricardo Rosselló, and strengthening calls for the decolonization of the island. Today, in San Juan, organizations have called for a massive march from the Capitol building to Fortaleza, the official residence of the governor of Puerto Rico, where mobilizations have been taking place for the past several nights in spite of brutal police repression.

The mobilizations came in response to the arrests of 6 people, including two former officials in Rosselló’s administration, by the Federal Bureau of Investigation (FBI) on corruption charges, as well as the leak of a group chat with Rosselló and his political confidants by the Puerto Rican-based Center for Investigative Journalism.

In the group chat, Rosselló and his advisors discussed how to manage the political narrative through media and boost the image of the governor and the administration through the manipulation of political polls. The document also revealed that the governor and his “brothers” used extremely sexist, misogynist and homophobic jokes and language while discussing other politicians, journalists, social movements and collectives, and even members of the Fiscal Control Board. There were even jokes made about the more than 4,645 people who died in the aftermath of Hurricane Maria.

The corruption charges against the six individuals involve the misdirection of $15 million worth of Medicaid and federal education funds.

The two incidents were the tipping point that sparked a mass uprising on the island which continues to suffer nearly 2 years after Hurricane Maria. Activists have pointed out that the devastation and slow recovery after the hurricane was directly related to Puerto Rico’s position as a colony of the United States.

Jocelyn Velazquez Rodriguez, spokesperson of Jornada Se Acabaron Las Promesas, explained in May last year that “the US government has been an obstacle to our recuperation completely. For weeks, they blocked the arrival of supplies, they took control of the entire health and security apparatus. They have basically served to slow down the process of recovery, denying to citizens the aid which they rightfully should receive.”

Just a year before the Hurricane Maria hit, on August 31, 2016, the US Congress passed the Puerto Rico Oversight, Management, and Economic Stability Act (PROMESA). This law authorizes the creation of a Fiscal Control Board (FCB) by the US government to tackle the ‘debt crisis’ on the island. The FCB has the power and authority to restructure Puerto Rico’s debt and budget.

Without mentioning the illegitimacy of Puerto Rico’s ‘debt’ in the first place, the measures taken to address it have been devastating and were even worse following Hurricane Maria. Pensions of retirees have been cut, the tuition at the State university has been tripled, labor reforms were passed which take away workers’ rights and guarantees, key state enterprises have been put up for privatization, environmental regulations have been relaxed to promote extractive industry activities and hundreds of schools have been shut down.

Julia Keheler, who was one of the six who was arrested last week, served as secretary of education of Puerto Rico in Rosselló’s administration. Keheler who is neither Puerto Rican nor has a background in education, hails from the US Republican Party and was responsible for closing 442 schools and pushing for the entry of charter schools in the Puerto Rican public education system. While in office, she received an annual salary of $250,000 which was justified by Rosselló. She eventually was forced to step down in April 2019 due to massive opposition to her push for privatization and allegations of corruption.

Keheler and Rosselló embody in many ways everything that the Boriquen people are resisting. The duo and other government officials, such as Ángela Ávila-Marrero, the head of Puerto Rico Health Insurance Administration who was also arrested last week, was slashing the budgets of key public sector services like education and health care in a country reeling after a devastating hurricane. They were using government funds for personal gain while pushing the people into misery and despair.

On their Facebook page Jornada Se Acabaron las Promesas wrote, “The clumsy theft of our public funds has been a standard occurrence for us for decades. The arrests of functionaries, advisors, friends, family members by agencies of the US government is a recurring show. The same federal agencies have lifted many of these corrupt individuals into power and facilitate their permanence there. They are the same institutions that arrest, intimidate and persecute those who raise their voice to demand greater transparency, denounce and fight against corruption and the colony.”

The demand of the protesters for Rosselló’s resignation has been echoed widely by political leaders in Puerto Rico and the US. Puerto Rican artists such as Benito Antonio Martinez Ocasio, aka Bad Bunny, René Pérez, aka Residente, have pledged to join the mass protests. 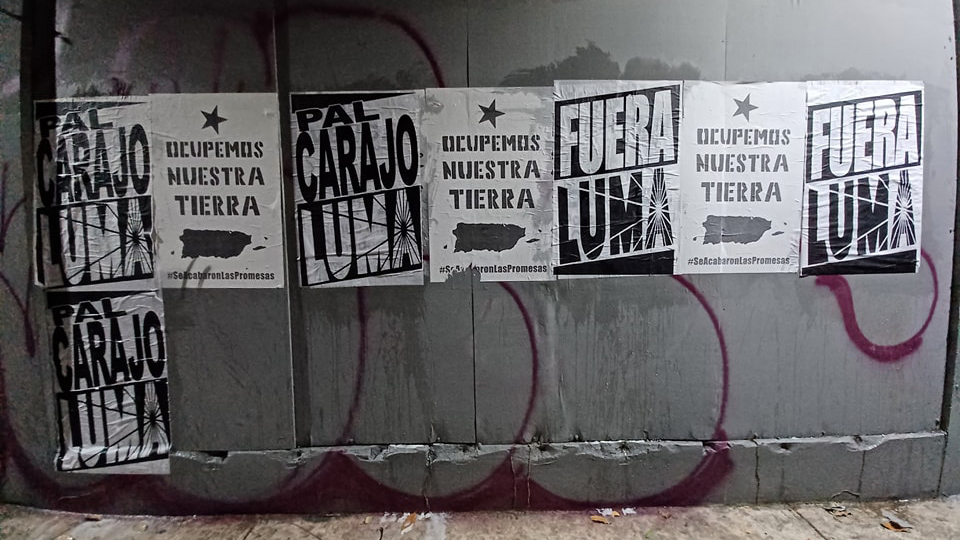 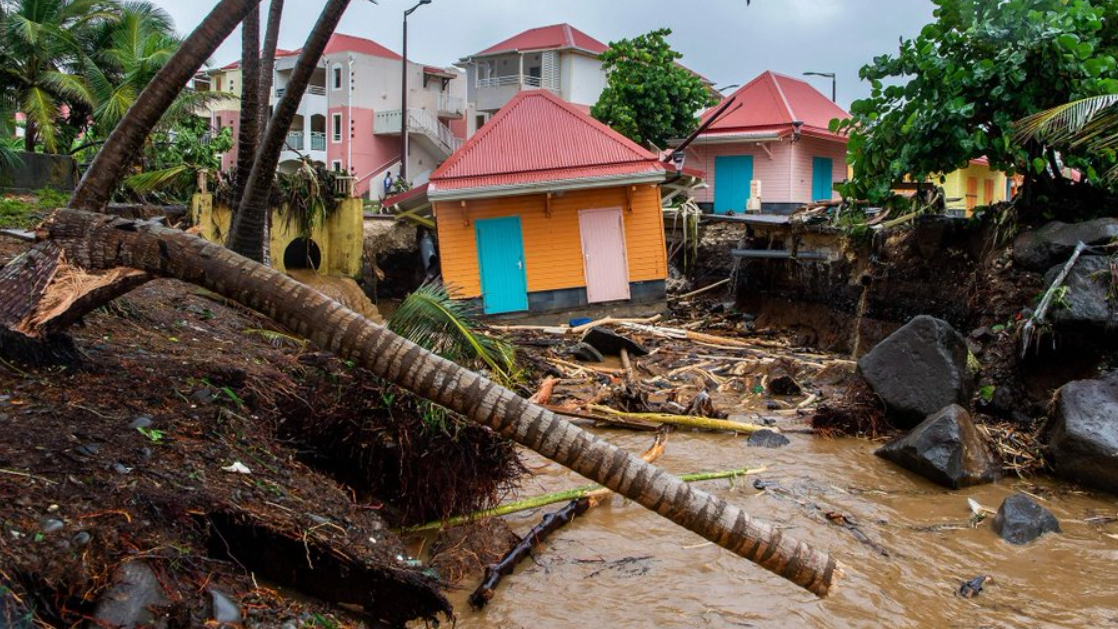 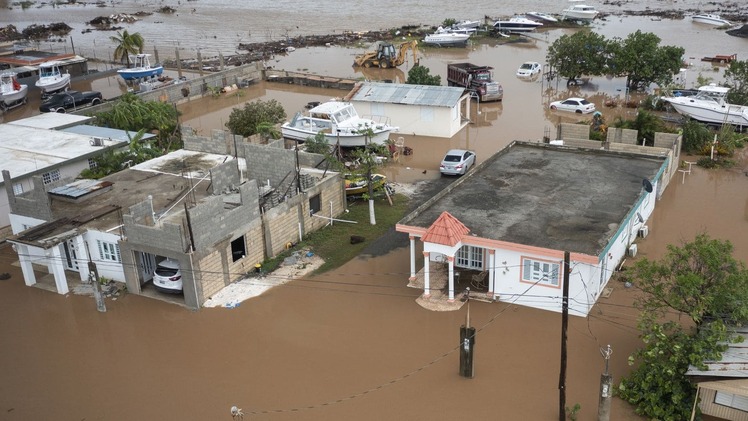