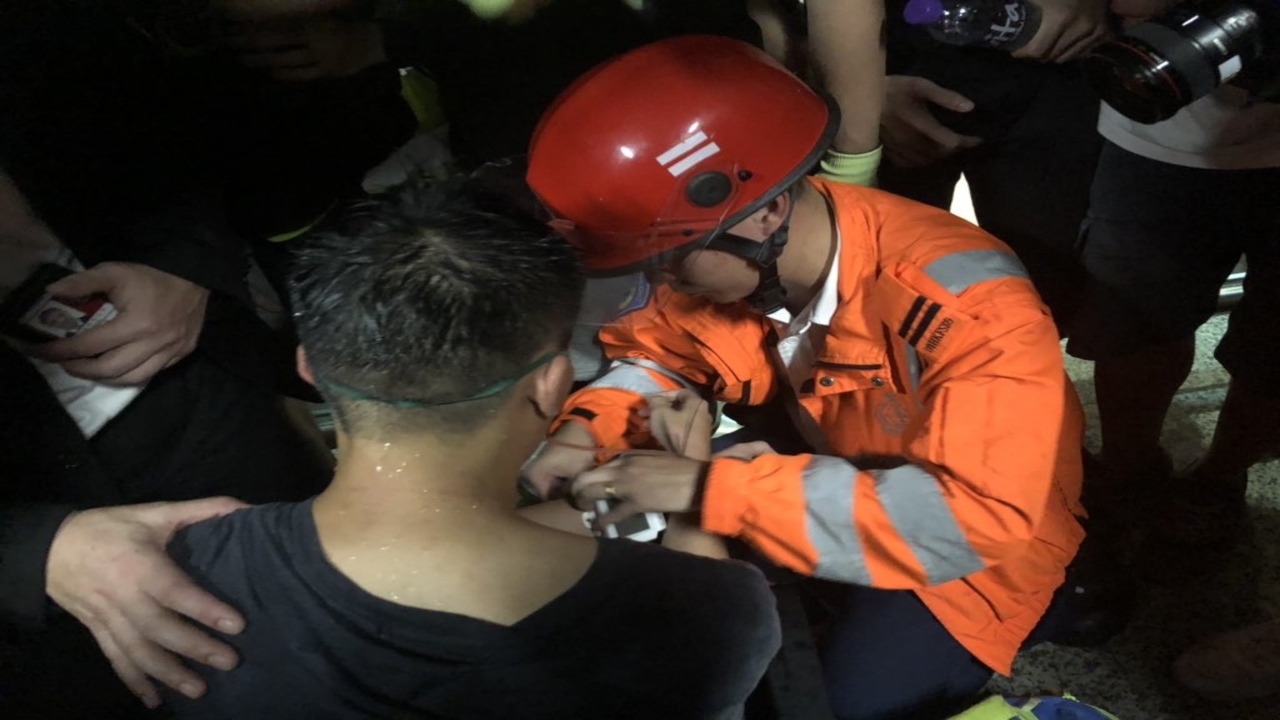 Paramedic checking heart rate of the journalist who had his hands zip-tied by protesters and was held up at the airport by angry protesters (Photo: James Griffiths/Twitter)

On August 13, protesters occupying the Hong Kong airport assaulted a journalist working for the Communist Partyof China (CPC)-funded Global Times and held him hostage for hours. Fu Guohao’s hands were zip-tied after rumors of him working as an undercover police officer and spying on the protesters spread. Live tweeting from the airport, writer and journalist James Griffiths reported the “ugly confrontation” in real time.

“I asked protesters what the point was even if the man was a cop at this stage, they had no idea behind continuing to hold him,” tweeted Griffiths. Later that day, he also tweeted an exchange that he had with some of the protesters.

A large number of protesters present at the airport also resorted to heckling other journalists on the premises, covering the incident. Several accused them of being undercover cops and, according to Griffiths, began shouting obscenities. A handful of protesters unsuccessfully tried to reason with what spiraled into an angry mob.

This incident has come as the grave shock in the course of the ongoing anti-government protests. Until recently, media outlets characterized the anti-China protesters as generally non-violent and peaceful. However, a careful analysis of reports suggests that ever since protesters broke into the Legislative Council (LegCo) building, the anti-China protesters have been clashing with pro-government factions and the police nearly every day.

The protests were initially triggered due to mass paranoia regarding Hong Kong losing its autonomy within China. It followed a proposal made by the government earlier this year, to bring out a controversial extradition bill, applicable to Taiwan, Macau and mainland China. The bill provided mechanisms for a court-mediated, case-wise extradition process for specific categories of crimes, none of which included political crimes. However, it was opposed by the anti-Beijing camp on the grounds that it made Hongkongers vulnerable to the mainland political system.

The bill also faced strong opposition from the business elite class of the city, which is otherwise generally noted to be supportive of the Beijing government. Many business establishments remained shut for a day in June as a mark of protest against the bill. Eventually, the bill was suspended and set aside to lapse by the government, with assurances from Hong Kong’s chief executive Carrie Lam that it wouls not be introduced again in the legislature.

Despite the fact that the bill is effectively dead, certain sections of protesters have taken on more violent forms of protests. The number of anti-government protesters has come down significantly, from nearly half a million to tens of thousands, according to the police. However, the current round of protests signify a break from the largely peaceful protests adopted since mid-June.

As the city commemorated Handover Day, the anniversary of the end of British colonial rule and resumption of Chinese sovereignty over Hong Kong on July 1, hundreds of thousands of people thronged the streets in support of the government and the police. Meanwhile, hundreds of anti-China protesters broke into the legislature, vandalized the central chamber and raised the colonial flag. This was the first major incident from the anti-China camp that was violent and in open defiance.

Since then, over the span of a month, the anti-government protesters, often seen wearing black shirts and masks, have become particularly disruptive. The airport has been occupied, causing hundreds of flights to be cancelled and forcing capacity reduction by more than half the usual. Apart from these disruptions, violent activity on the part of the protesters has also been reported. Several passengers have been verbally harassed by the protesters at the airport and the subway lines for refusing to participate in their cause. The city police have claimed that many police stations have been vandalized, with officers being attacked by mobs clad in black, in several parts of the city.

The police have been accused of manhandling, tear-gassing and assaulting the crowds. There have also been mass arrests of protesters, ranging between 400 and 500, according to different estimates. Pro-government protesters have also engaged in violent clashes with the anti-China protesters. The most widely covered such incident occurred at the Yuen Long MTR Station, where a mob clad in white attacked anti-China protesters. According to certain reports, regular passengers were attacked as well, leading to the arrest of 20 people in relation to the incident.

Despite violence being common on both sides of the political divide, there has been a tendency to characterize the actions of both factions very differently. For instance, pro-government demonstrators were routinely described as “mobs” after the incident at Yuen Long in most reports by media outlets like CNN, BBC and CBS. This was despite the fact that apart from the Yuen Long incident, pro-government demonstrators have not particularly been any more violent than the anti-China ones.

A recent report by the BBC also suggested that most of the pro-government demonstrators have been hired by the business elite. They cited a 2017 news report by the South China Morning Post that estimated that over 100,000 people in the city were associated with the infamous ‘triads’, which are criminal syndicates with a long history of operating in the city. There were reports that eight of the 20 people arrested in the Yuen Long case had a prior record of being active in the triads. The piece very suggestively pushed the narrative that the pro-government sympathizers are largely “thugs” hired to repress anti-China protesters.

In comparison, coverage of the LegCo incident portrayed it as a casual occurrence, not seriously violent, and a continuance of the previous non-violent protests against the bill. Even incidents of attacks on police stations, heckling of bystanders and journalists, and equally violent clashes with pro-government demonstrators were given little to no coverage by the international media.

With the current incident at the airport, even journalists and media outlets sympathetic to the anti-government protesters have begun introspecting. Griffiths, who himself has supported the anti-Beijing camp and its protests, could not help but be dismayed at such developments. “This was a movement famous for clearing thousands of people out of the way on the streets to let an ambulance through,” he tweeted, “[it is] now blocking a stretcher while a handful of more reasonable people in tears try to reason with them.” 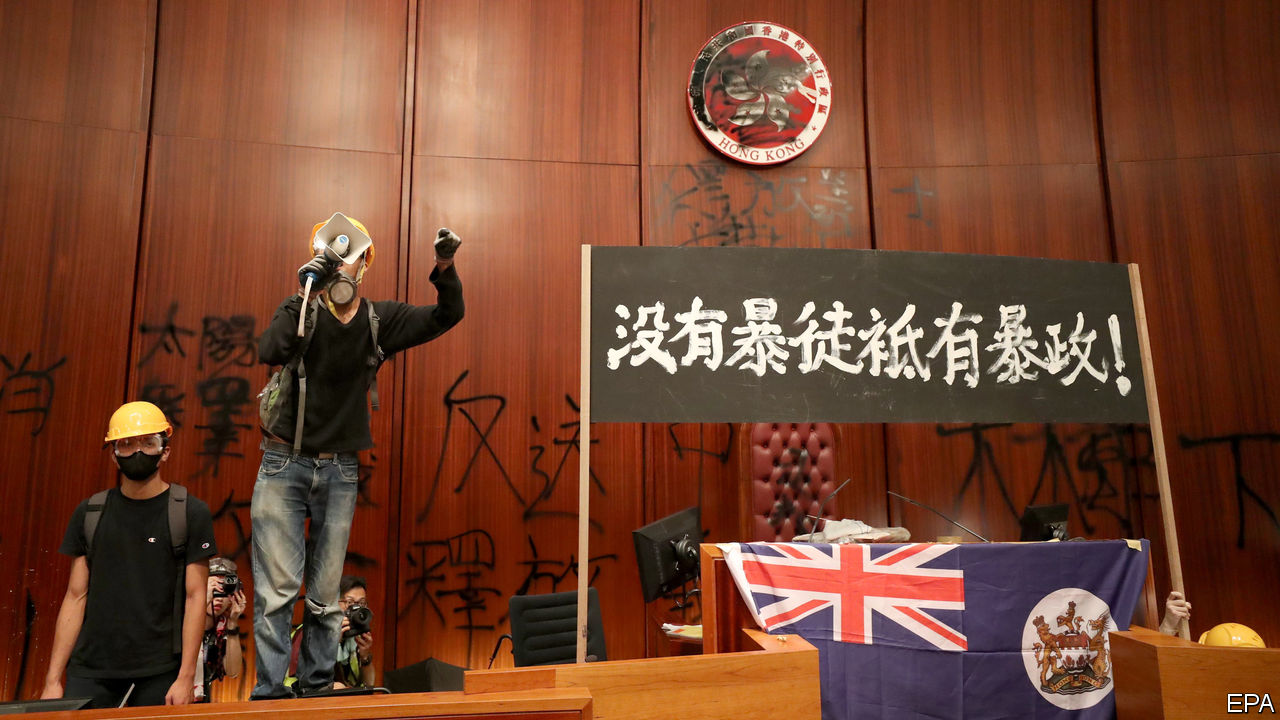