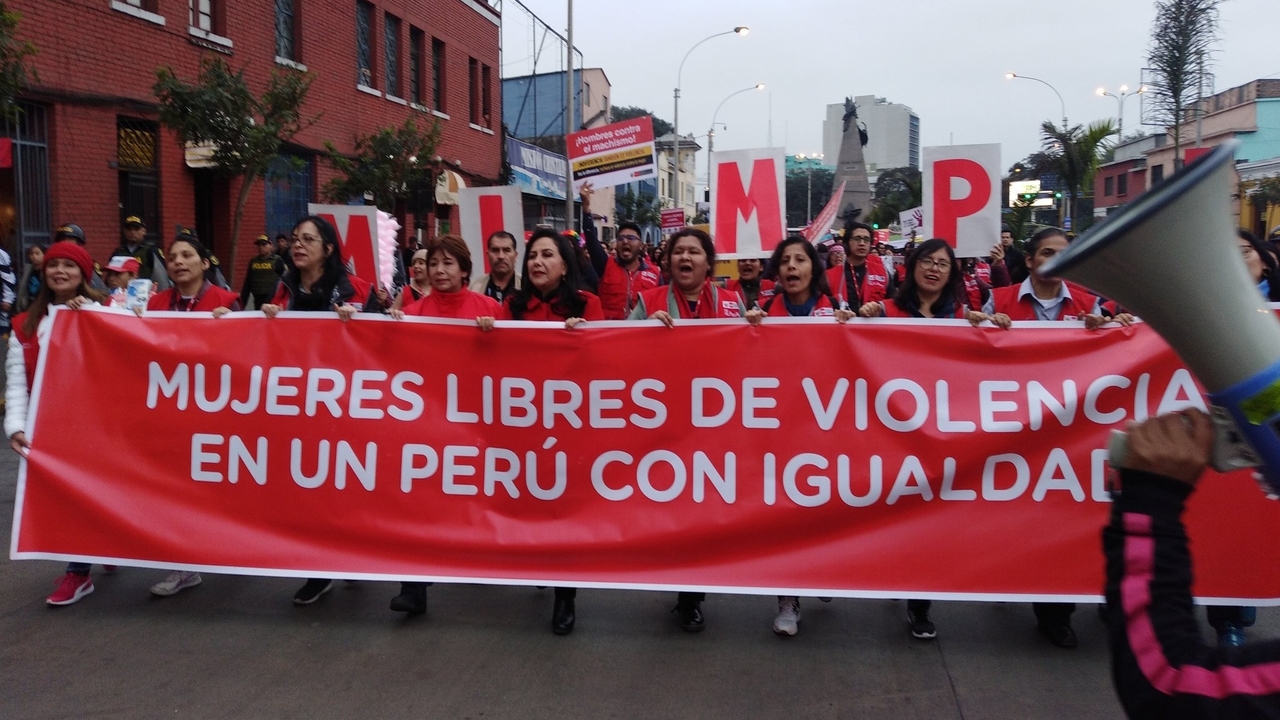 "Women free from violence, in a Peru with equality"

On August 17, under the slogan of “For Women Free of Violence”, thousands of women, transgender people and non-binary people, members of social and feminist organizations demonstrated across Peru to reject the alarming figure of 105 femicides that have been registered so far in 2019 and to demand an end to all forms of violence against women. The demonstrations were called for by the women’s collective “Ni Una Menos” (Not One Less).

In the capital, Lima, hundreds marched from the Campo de Marte park to the Supreme Court of Justice to demand justice for all the victims of machismo, patriarchal and sexist attitudes and actions. Similar demonstrations were carried out in the regions of Áncash, Apurímac, Arequipa, Cajamarca, Ica, Junín, Lambayeque, Moquegua, Piura y Tumbes to denounce the growing number of femicides.

The demonstrators marched with placards displaying photos of the women killed during the recent years to raise awareness of femicides. Banners were also displayed with strong messages against this violence like “Harassment is Violence”, “Alive, Free and Fearless”, “No more silence”, “No more impunity”, “He loves you, if he gives you your space”, “He loves you, if respects your opinions even if they are different [from his]”, etc. The Minister of Women and Vulnerable Populations, Gloria Montenegro, also joined the demonstration in Lima and called on the citizens to remain alert and report any kind of violence against women.

“#NotOneLess Men and women together, in a loud voice, we say enough! To the male chauvinist culture that assaults and kills! We want to be alive and have the same opportunities [as men] to develop. No more indifference! #NoMoreViolence,” tweeted Montenegro.

According to statistics from the Ministry of Women and Vulnerable Populations (MIMP), 84 cases of femicides, 204 of attempted femicides, 7,332 of sexual violence and 29,761 of physical violence have been reported from January to June 2019.

This is the fourth annual mobilization carried out by the Ni Una Menos collective. The first was carried out in 2016 after the abusers of Cindy Arlette Contreras and Lady Guillén were released from prison despite strong evidence against them. In July 2015, Contreras’ boyfriend Adriano Pozo had been captured brutally beating her in a hotel’s CCTV cameras in the city of Ayacucho. The attack left her with damage to one of her legs. However, a year later, the Superior Court of Justice suspended his prison sentence for causing minor injuries. Similarly, in June 2012, Lady Guillén was violently beaten by her partner Ronny Garcia in a house in Puente Piedra. Preventive detention was ordered against him, but, despite the evidence, in 2015 he was released from prison. After the march of 2016, the cases were finally brought to trial and both the abusers were convicted for attempted femicide and were sentenced for years in prison.

The United Nations in one of its reports, also called “machismo” as one of the main causes behind the ruthless femicides because it normalizes violence against women.