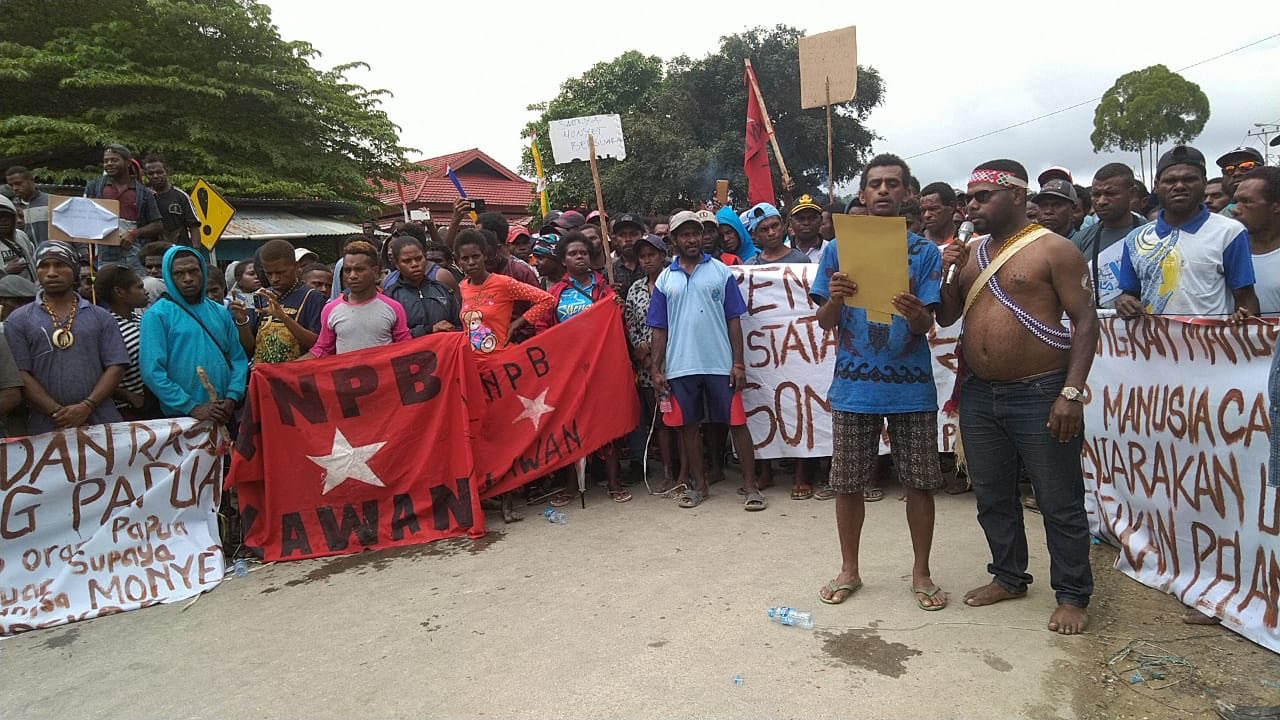 A protest in Maybrat town in West Papua. Unrest has spread across the Papuan provinces in the eastern end of Indonesia. (Photo: Veronica Koman/Twitter)

Thousands of Papuans have taken to the streets in Jayapura, Sorong and other major cities and towns of the Papuan territories of Indonesia. The current protests began in response to the recent spate of mass arrests, police violence and racist attacks on Papuan students and activists, that occurred on August 16, on the eve of the Indonesian Independence Day.

Although most of the protests remained largely peaceful, minor incidents of vandalism and property destruction by protesters were reported in Sorong and Manokwari. In Manokwari a local town legislature building was set on fire, while in Sorong people stormed into the city’s airport, shutting down flights, and attacked a prison complex, freeing several inmates. No human casualties were reported in any of the cases during the course of the protests.

The Indonesian government response has been to scale up the violent repression of the Papuan people and activists. An extra 300 troops and 1,200 police personnel were also deployed. The region, that is already heavily militarized, has been suffering a violent crack down on pro-Independence militants by state security forces. In this latest bout of violence dozens of civilians have been killed.

Despite the fact that militancy is limited to the eastern hinterlands, there is a very high concentration of state security forces in West Papua, though the major cities in the province do not generally witnessed high levels of confrontation.  However, the current unrest and the brutal retaliation by the police has caused a complete breakdown of public order in the Papuan provinces.

Thousands of people taking to the streets protesting racism, triggered by racists attacks against West Papuans in Java this week. This is the biggest protest in years. pic.twitter.com/T7Iu0X533c

Since Friday, 169 Papuans have been detained across the country, mostly from the provinces of Papua and West Papua, due to their participation in the demonstrations held on the 50th anniversary of the New York Agreement on August 15. Though the demonstrations were peaceful and non-violent, the police retaliated violently.

According to sources, over three dozen people were injured in police violence. Most of the detainees were students, many of whom were dragged out of their hostels and held without charges. Apart from the violence inflicted by the police, there were also reports of racist attacks on Papuan students last week, often through police complicity.

In an incident at a dormitory in Surabaya in East Java, where students were accused of bending a flagpole, a mob surrounded the building and shouted racist and violent slogans. Instead of controlling the mob, the police tear gassed the place and detained 43 Papuan students outside the hostel. News of such incidents has prompted massive outrage and partly triggered the intensity of the current protests.

Papuans have long been caught in an armed conflict between the Indonesian government and Papuan nationalists. The New York Agreement, signed in 1969, transferred sovereignty over the West Papuan territories from the Dutch to the Indonesians, after nearly a decade of naval grandstanding between the two.

Papuans have nevertheless demanded a democratic referendum on their sovereignty. They have maintained that the annexation by Indonesia, perpetrated at gunpoint, was against the wishes of the people. Over the course of history, Indonesian control over the region has been marked by policies characterized as being colonial and genocidal.

The protest rallies held in Jakarta and other parts of Indonesia, to commemorate the 50th anniversary of the agreement, brought up the long-standing demand of self-determination for the Papuans.

Recently, the Indonesian government was angered by the Pacific Islands Forum (PIF) for hosting the leader of the militant United Liberation Movement for West Papua, Benny Wenda, at their summit. The PIF also released a joint communique by the national leaders, calling for an investigation by the United Nations Human Rights Commission into the reports of human rights violations in the Papuan region.